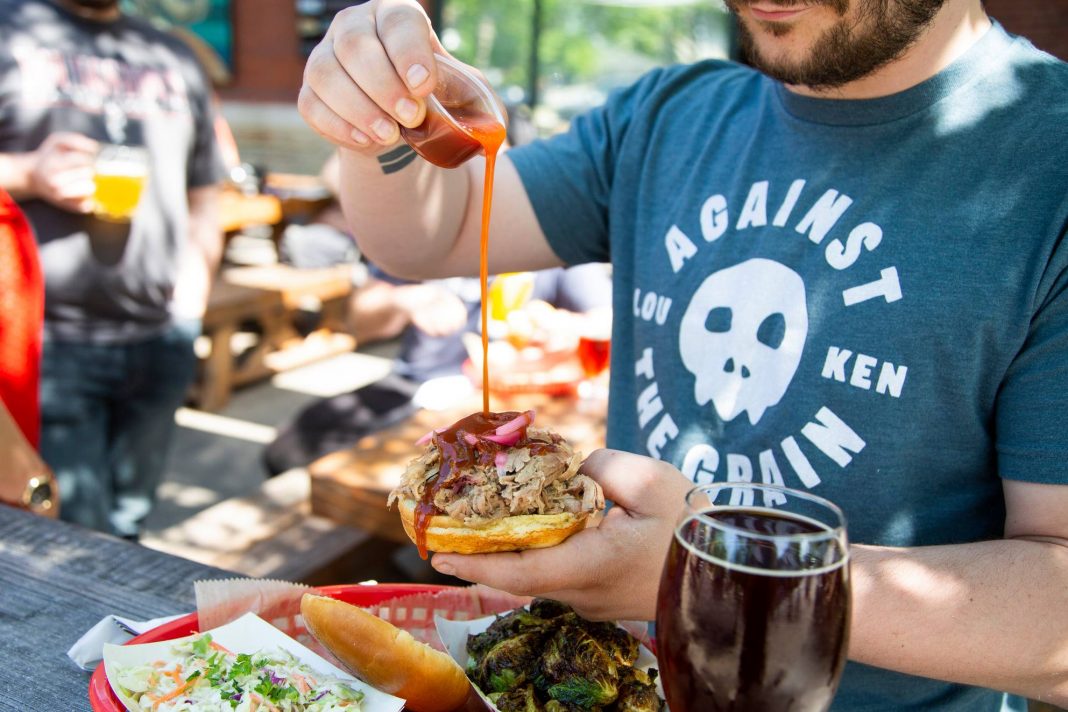 The boys are back in town.

Okay, I know; actually the Against the Grain (AtG) boys never left town, but with the impending reopening of Against the Grain Brewery & Smokehouse at Louisville Slugger Field (Thursday, June 3 at 4:00 p.m.), after almost a year on the sidelines during the COVID-19 crisis, it’s feels like a signal from The Fab Four that normality has at last returned to the Louisville beer scene.

An information release promises a slightly tweaked menu featuring house-smoked meats, as well as the core lineup of AtG house beers, with rotating seasonal releases and eccentric house specialties, just like always. The interior space has been given an audio-visual upgrade and deep cleaning, along with some new art and fresh paint.

Never fear: the ‘tude abides, but first a thought from AtG co-founder Sam J. Cruz as to the importance of the original location’s post-pandemic grand reopening:

We teetered on moments of fear and uncertainty that we would not move forward. But we at ATG believe in downtown Louisville, we believe in the people of our great city and we love all that is Louisville. So we decided that we would grind it out with our fellow Louisvillians and local businesses and go all in on this great space. So here we are.

The Against the Grain Brewery & Smokehouse will be open seven days a week, from 4:00 p.m. to 9:00 p.m. Monday through Friday, and 11:00 a.m. to 10:00 p.m. Saturday and Sunday. These hours are subject to adjustment as commerce and staffing dictate.

It so happens that 2021 is AtG’s 10th anniversary year, and recently during the course of revisiting the brewery’s inception, I wrote a few words that are worth repeating now.

Over the years the pedantic purist in me has rolled his eyes at some of AtG’s antics, but let’s be clear: I love these contrarian risk-takers for doing it their way in a city that doesn’t always reward originality, and respect immensely what they’ve accomplished during the past decade.

In March, Cruz and his partners (Adam Watson, Jerry Gnagy and Andrew Ott) announced plans for another multi-faceted downtown location at 119 S. Seventh Street, formerly Another Place Sandwich Shop and Jimmy Can’t Dance, and currently being refashioned as Against the Grain Sandwich Emporium upstairs, and The Flamingo Lounge in the basement.

Concurrently, their decision in 2019 to expand into the old Cumberland Brews space on Bardstown Road was prescient, indeed, as Public House by Against the Grain became the brewery’s sole public outlet during the darkest period of pandemic operational restrictions.

Dull moments have been rare during a full decade of against-the-graininess in Louisville, because in addition to providing the area with consistently excellent beers, AtG has pursued a high level of performance art (I won’t stoop to referring to it as “marketing”). As an example of AtG’s kind of boilermaker, consider a shot of agitprop alongside your ice-cold Bo & Luke.

So in 2011, (the founding quartet) opened Louisville’s first brewer owned-and-operated brewery, Against the Grain Brewery and Smokehouse in downtown Louisville, Ky. With a brewery in tow, they set out to change the belief that craft beers were for the few. No more stuffy beer nerds, sniffing and sipping. And no more obscure beer bars to taste aged imported ales! Great beer is for everyone, especially right here in Louisville.

It would be very boring ’round here without AtG, wouldn’t it?