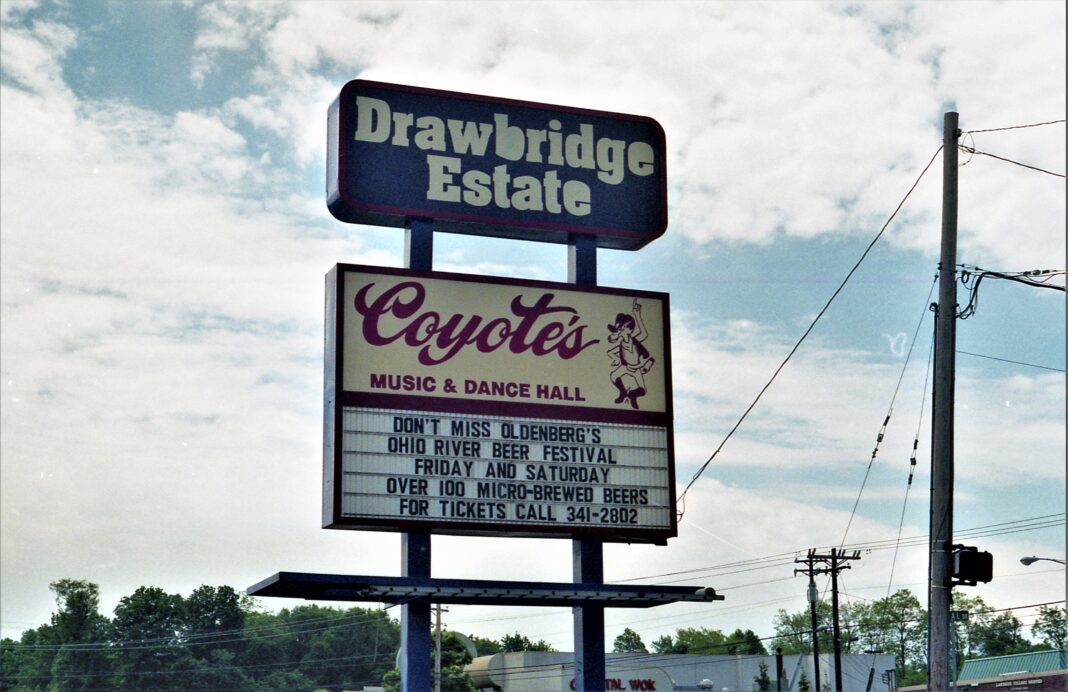 Today’s cover photo was taken in May, 1995, at the Drawbridge Estate in Ft. Mitchell, Kentucky, where an inaugural beer festival (I think it died well before “2nd annual” became a promotional option) took place at the Oldenberg Brewing Company (founded 1987).

The Gnarly Gnome has a good overview of the brewery’s 15-year history, which primarily attests to the level of sheer underachievement-by-design which is attainable whenever beer is regarded as an investment vehicle (read: after-thought) pursued by lawyers and real estate moguls. The site apparently has been cleared of structures, and will become a purpose-built retirement community.

In retrospect, there is something instructive, encouraging and almost noble about retirees living where the German-style beer hall was unceremoniously converted into a Coyote’s-branded boot, scoop and booger emporium.

For some reason, recollections of Oldenberg have brought the phrase “tear down this wall” into my head, probably because yesterday the man who ended the Cold War died, and yes, I know that Ronald Reagan has been gone quite some time, but although Reagan played his required role in the international drama, it was actually Mikhail Gorbachev, the last leader of the Soviet Union, who made the decisions pivotal in getting the deed done.

The Berlin Wall, arguably the single most iconic symbol of the Cold War, fell in late 1989, only three months after I viewed it for the final time from the vantage point of the barrier’s East Berlin side. In 2022, you’d have to be somewhere around 40 years old to have any active memory of the Wall, East Berlin, Gorbachev or the Cold War.

Or, how comparatively hard it was to get good beer in Louisville at the time.

But just because events occur prior to a random individual’s life span on this planet, do we take this to mean they’re unimportant? I’m prepared to argue vociferously that each of us is the sum total of the history preceding our existence, whether decades or millennia. This is patently obvious in the biological sense, and it’s just as irrefutable when it comes to human culture.

Why did the cave dwellers of Altamira made charcoal drawings of local animals and plants 36,000 years ago? There are many reasons, including the absence of electricity, crayons, cameras, and TikTok videos. They used what they could make (charcoal) to create a record. Spoken language developed, and stories were told, later to be preserved by words written on a page.

And words matter. My digression today is occasioned by Jeff Alworth’s post at his Beervana blog.

If he hadn’t died of complications related to Parkinson’s disease, we’d be celebrating legendary writer Michael Jackson’s 80th year in 2022. Instead, we mark the 15th anniversary of his death today. If you’re younger than about forty, you’ve probably never read a word of his prose, and are aware of him by reputation only—if even that. Part of that is the long period since his death (three or four lifetimes in beer years), but also because far fewer people read about beer now. In the late 1970s and through the end of the century, people hung on Jackson’s words. There was no internet and information about beer was hard to come by. If you read about beer in those days, you read Jackson.

It’s not the reference to those younger than forty that strikes me; rather, it’s this: “far fewer people read about beer now.” Alworth doesn’t lie, of course. It’s just that his observation comes at a particularly annoying juncture of history for those of us afflicted with the written word (bold formatting is mine).

Had Jackson not died, he would have continued writing. Martyn Cornell, ten years his junior, has a new history of Porter coming out. Roger Protz, three years older than Jackson, continues to write. Ron Pattinson is no spring chicken. (Writing is an affliction, not a profession, and if writers could stop, they would never have become writers.) It’s impossible to say what he might have written, but a lot easier to assume that the writing, in some form, would have continued on for years.

Alworth is right again—and he’s not finished yet.

One of the signature qualities of modern beer is fragmentation. It’s impossible to keep abreast of everything. Had Jackson lived, that would continue to be the case, but his profile might have helped focus our attention, as it did when he was alive. He was always so generous in his writing to new drinkers, and surely that quality would have been useful for people coming to this cacophonous world today. Perhaps someone of Jackson’s stature might have convinced them to pick up a reference book. One can imagine so many ways he might have changed things.

I’m afflicted with writing, stubborn about history, and dismissive of the many shortcuts demanded by the populace to relieve them from the burden of thinking. At 62, I’m a bit too far along to accept rampant ignorance, short attention spans and the robotic aural assassination native to Auto-Tune, and as these qualities (and others) pertain to the enjoyment of beer, I firmly believe there are, as yet, a great many people who view these matters the old-school way, who want to go deep, not shallow; read a novel, not a bullet point; and decide for themselves, not repeat talking points like a programmed drone.

In short, echoing General Grant, “I propose to fight it out on this line, if it takes all summer,” or perhaps more accurately, for as many years as humanly possible.

However, I’m not a complete monster, bereft of feelings.

Here’s a video (gads) proving that those “tents” at Oktoberfest in Munich are pre-fabricated buildings. Pro tip: When visiting Munich, make your appearance at Oktoberfest for lunch. Have a few beers and some food, and enjoy the company of locals. Then get out of there and spend the rest of the day at a clean, well lighted place serving pleasant glasses filled with timelessness.