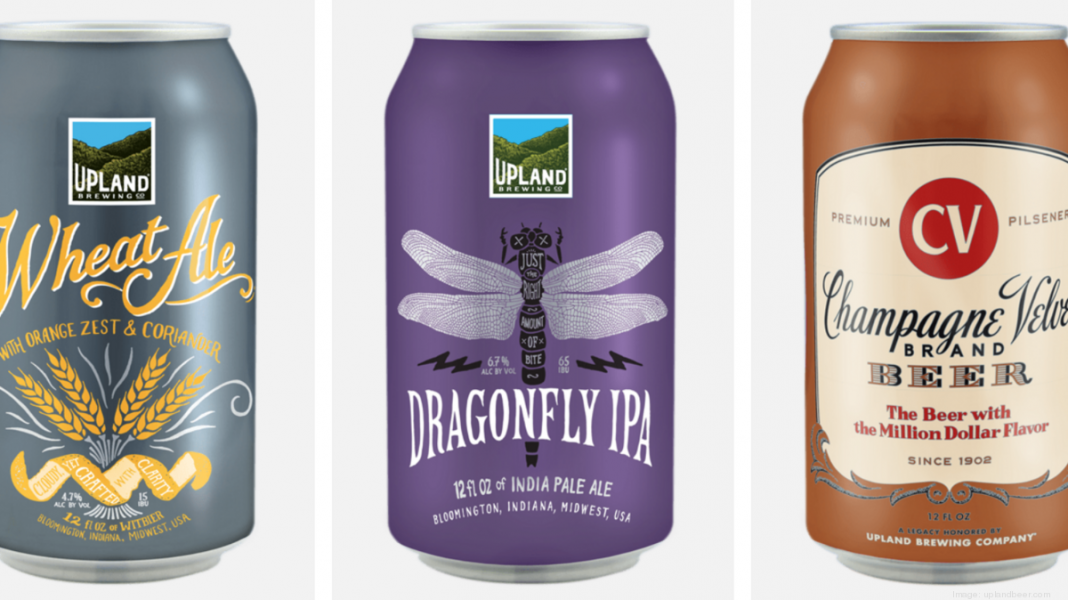 Opening day is pegged for Friday, April 9th at 11:00 a.m., but the Upland story begins in Bloomington, Indiana all the way back in 1998. Upland is Indiana’s third-largest brewer in terms of production, and it is one of the state’s ten oldest breweries in continuous operation.

Upland’s Belgian-style Wheat has been brewed since inception in 1998, and it must be viewed as one of Indiana’s iconic craft brands, while Champagne Velvet’s pre-Prohibition formulation is a loving throwback to the state’s classic German-influenced Gilded Age lager brewing industry.

During the past decade Upland has become known for its excellent wood-aged (and kettle) sour program, which has grow exponentially from then-brewer Caleb Staton’s early fruited lambic experiments in the late aughts. There are too many variants to list here, so go to the Wood Shop for more information.

Among Staton’s predecessors bearing the mash paddle was Russ Levitt, who opened the brewhouse at Bloomington Brewing Company in 1994, then migrated to Upland in 1998. Levitt’s replacement at Bloomington Brewing was Charles Porter, now the co-owner of Little Beast Brewing in Oregon. When Levitt departed Upland, Porter in turn replaced him there, too, and created Dragonfly IPA and Bad Elmer’s.

Neither the actor nor the baseball catcher, my friend Ed Hermann brewed at Upland in the early 2000s. While living in Germany, Ed had learned brewing helping out at the Zu den 12 Aposteln brewpub in Frankfurt am Main. If memory serves, during Ed’s tenure at Upland he came up with Valley Weizen, a tasty Bavarian-style wheat ale. Mark my words: some day a regional brewer will decide to specialize in such, and succeed.

A more familiar face to Louisvillians is the great Eileen “ALE-een” Martin, formerly head brewer of The Silo and Browning’s in Louisville; she worked as an assistant brewster at both Upland and Bloomington Brewing before retiring from the brewing world a few years back.

Upland’s riverfront space in Jeffersonville will be its sixth location in all. Others are in Bloomington (embracing the original brewpub, Wood Shop and production brewery); Columbus; Carmel; College Avenue (Indianapolis) and Fountain Square (also Indy, which includes a pilot batch brewery). Beer will come to Jeffersonville from Bloomington as well as the Fountain Square brewery, which will brew small batches (the “Switchback Series”) specifically for the new spot.

Here are a few tidbits culled from a recent information release.

Now for something completely different. Upland’s Matt Wisely has the title of Brewery Innovation Lead, and accordingly, and in celebration of the Jeffersonville opening, Wisely has designed a unique (and dare we say “innovative”) drink.

A unique twist on the Oaks Lily cocktail starts with a new small-batch creation just for Upland Jeffersonville. A fruited ale made with cranberry and orange will be topped with Blackberry wood-aged sour and garnished with a lemon slice for a refreshing beer cocktail.

I’ll be sticking to Champagne Velvet, but to each their own — except hard seltzer, which should not be permitted under any circumstances.

Speaking personally, I’ve known Upland’s people and served their beers for most of the past 23 years, and while there have been periods of inconsistency along the way, the brewery has its game plan firmed up and dialed in.

The starting lineup is great, and the seasonals dependably solid. Last autumn I had the opportunity to taste a selection of ales drawn the Upland sour and tart programs, and as the geeks already know, they’re among the best around. Conversely, the prosaic craft beer fans among us will find plenty of options for having just one more.

There is every indication that Upland’s choice of Jeffersonville will be a winner. The brewery is quality, the city understands hospitality, and the building is an ideal fit.