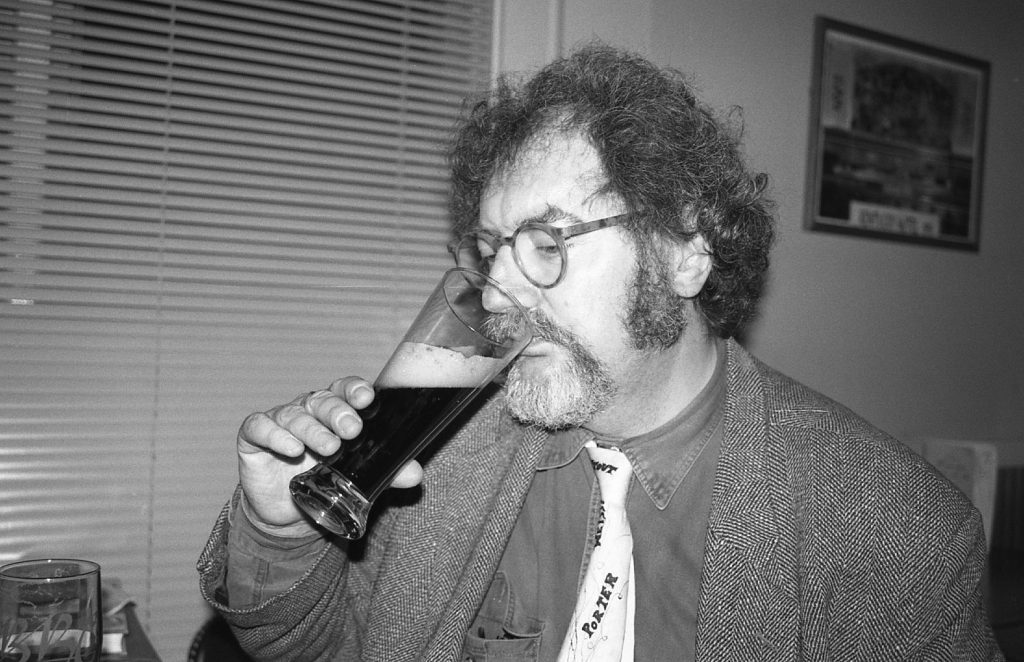 I fly to America every other month on average. I have been doing this for more than 20 years, and have visited every state. I come here for the beer…and interviewers still don’t believe me.
— Michael Jackson, 2001

Michael Jackson (1942-2007) was a bewhiskered, professorial Yorkshireman in spectacles and wearing a succession of loud beer-themes neckties, equally proud of his working class English roots and a grandfather’s Lithuanian Jewish heritage, the latter periodically referenced by references to Baltic Porter’s exotic hinterlands.

He introduced Belgian ale to the world, and Belgian brewers to each other. Most importantly, he popularized a taxonomy of beer styles, and while this is a subject for augmentation, revision and seemingly endless current debate, it’s hard to imagine contemporary beer and brewing without such a conceptual framework.

Lest there be any confusion (really, could there?), be assured I’m speaking here of Jackson the accomplished journalist and pioneering beer writer, who wasn’t at all perturbed by the existence of a far better known American musical namesake.

An episode of The Beer Hunter, his essential 1989 television series, began with the host wearing a white glove to inform viewers that while his name might be Michael Jackson, he neither sang nor drank Pepsi, but wrote about beer.

In late autumn of 1994, it was revealed that Michael Jackson would be making a day-long stopover in Louisville during the course of an ongoing journey through the United States. He was examining beers and breweries from the burgeoning American “microbrewing” movement, then numbering just over 500 breweries nationwide, the bulk of them concentrated in New England, the upper Midwest, Colorado and the West Coast.

Two breweries existed in Louisville in 1994: The Silo Microbrewery, founded in 1992 at 630 Barret Avenue and closed for good in 1997, and Bluegrass Brewing Company’s original flagship location at 3929 Shelbyville Road, which opened in 1993 and shuttered in 2017, although in 2021, BBC still brews at its Third & Main restaurant downtown.

As an aside, brewer David Pierce opened both the Silo and BBC, and he also had a hand in another “first” that most Louisvillians have forgotten, at Charley’s Restaurant on Main Street circa 1989.

“Charley’s was actually the pioneer in modern brewing in Louisville,” David posted at Robin Garr’s Louisville Restaurants Forum a few years ago, “as they were the first to have a Federal brewers permit after (the original) Falls City closed. I brewed a couple batches there on my homebrew equipment and it was sold as Charlie’s Cream Ale. The beer was a Sierra Nevada Pale ale clone I designed, right down to yeast I cultured out of a bottle of SNPA.”

By the time David had mashed in at all three of Louisville’s new breweries, two popular homebrew clubs were operational in the metro area: Louisville Grain and Extract Research Society (L.A.G.E.R.S., founded in 1989), and Fermenters of Special Southern Indiana Libations Society (F.O.S.S.I.L.S., in 1990).

Both clubs were primary conduits for interest in all things beer, including all-purpose beer appreciation as well as homebrewing, this being the era prior to the Internet’s proliferation when information was emphatically not a handy mobile device away. David was a go-to source for homebrewers, as was Eileen Martin, who had replaced him at the Silo and was an early exemplar for women seeking their proper place in male-dominated brewhouses.

For those of us pursuing better beer, the internationally renowned beer expert Jackson’s visit to Louisville stood to be every bit as impactful as a concert by the Jackson who performed. His very presence would be validation that our two local breweries were on the national map, and November 19, 1994 was going to wonderful, almost like a holiday.

Jackson would be visiting both BBC and the Silo to taste their wares, and to meet loyal readers, brewpub patrons and homebrewing club members. His efforts were aimed at researching a new book about American microbrewing, and we could only hope his new book about beer* would be as good as the first, which came out of nowhere and completely changed the way many of us henceforth would drink (and think about) our preferred adult beverage.

By the start of 1977, Michael Jackson was a mildly successful, 34-year-old newspaper and television journalist…he would exit 1977 as the leading authority on beer in the English-speaking world, maybe the whole world. For it was during that year that publishers Prentice-Hall and Littlehampton Books Services released his World Guide to Beer in the U.S. and the U.K., respectively. It was a groundbreaker in terms of explaining and popularizing beer.
— Tom Acitelli

Michael Jackson’s World Guide to Beer fell into my hands at some point around 1983, long enough after its original 1977 publishing date for the book to be stacked atop the discount tables at mall bookstores the nation over, and still a few years before the triumphant second edition was published in 1988.

Between the two editions, I made my way to Europe in 1985, intent on tasting the beers Jackson had described, and experiencing the culture of which they were so integral a part. World Guide to Beer was as much a foundation of my preparations as Europe on $25 a Day (yes, really, you could) and the Thomas Cook European (Rail) Timetable.

It is quite impossible to overstate the influence Jackson had on me, my ultimate choice of a career in beer, as well as many thousands of other beer drinkers. We doted on every word, and continue to find in Jackson’s elegant and precise prose a purposeful rationale for our quest for the perfect pint. 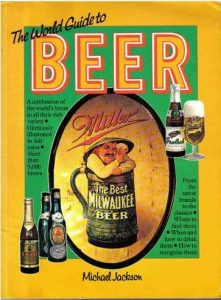 In one sense, and sadly so, much of World Guide to Beer and its subsequent companion volumes are decidedly obsolete, because the world (and beer) has changed considerably in 44 years.

Today it’s easy to read Jackson’s prose as elegiac, and to see the sepia tones seeping between the lines, delineating all that has been lost. He understood at the time that the traditional beer ways were passing. Fortunately Jackson was an exceptionally engaging writer, and his written passages bring extinct beers and demolished breweries back to life again.

You can hear the Bavarian beer hall chatter amid clinking liters of Helles, feel the vibration of marching feet as British factory workers approach the pub for their cool pints of Mild, and smell coal smoke, pig ordure and farmyard verdure right around the corner from the Dupont brewery in rural Hainaut, Belgium.

To me, Jackson was the beer world’s Samuel Johnson, the 18th-century English essayist who established expository norms for non-fiction and wrote a dictionary of the English language. 150 years later, Jackson synthesized Johnson’s stylistic and organizational approaches and did much the same for the language and vocabulary of beer.

Jackson did not invent the notion of beer styles, but he introduced them for the consideration and further refinement of a bland, lager-soaked planet, though it is his association of beer with place that survives as the finest representation of his genius.

Those 20th-century industrial fermentation factories may have stolen beer from its traditional point of localized orientation, but Jackson stole it back — first a little, and then a lot, and now 8,000 American smaller breweries later, either you get it, or you don’t.

Jackson generally refrained from detailed technical writing, possessing instead an intuitive ability to filter hyperbole of the sort favored by marketers, and to viscerally reconnect beer to its “terroir” in terms of physical geography, human culture and social conditions. He did so factually, wittily, majestically, and always with supreme lyricism.

Not exactly the King of Pop, but surely a duke or viceroy of what mattered most to me: beer. 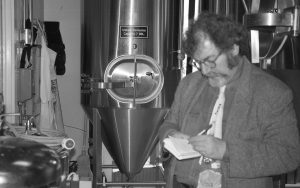 “I still see people buying and swilling terrible beer. I sometimes think that my job is like farting against a gale, but I just keep moving forward.”
— Jackson, circa mid-1990s

David had been contacted by Jackson’s agent, who instructed him to book a hotel room and have someone waiting at the airport to meet the writer. Despite being an inveterate sandbagger, I eagerly volunteered to help. Rich O’s Public House would be closed for the day; our customers were all going to BBC or the Silo, anyway, and how often would there be a chance to spend time with the Beer Hunter himself?

I’ll always be grateful for the opportunity to join David upon Jackson’s arrival. He was hard to miss coming up the jet way, hirsute, a tad frumpy, and lugging a portable typewriter. We had a nice chat and dropped him off at the Seelbach to freshen up.

It proved to be a gratifying afternoon. David guided Jackson on a tour of BBC, then the writer was seated for beer flights. He kept notes with a reporter’s pad the old-school way, and seldom took more than an ounce of beer per sample, making occasional comments and asking questions. It was work, not play. Surely we ate at some point, although I can’t remember a single bite.

Jackson had a few books in print at this stage, and event attendees brought numerous copies for autographing, as well as a few bottles of their own homebrews, which he sampled with the same polite efficiency and constructive comments as for the BBC’s varieties.

The scene was repeated at the Silo, with Eileen joyfully chaperoning Jackson through the building, and with perhaps two dozen beer geeks making the trip from St. Matthews to Baxter Avenue.

Then something completely unexpected happened.

Several of the attending beer enthusiasts who lived in Indiana asked if we’d consider opening the Public House for a celebratory nightcap. No problem, but on a lark, someone decided to ask Jackson if he’d join us.

He agreed, and I almost fainted on the spot.

It seemed there would be yet another beer hunt, this time embarking from downtown Louisville at 9:00 p.m., crossing the Ohio River to an embarrassingly unfinished strip mall bar space that could offer a scant three beers on tap. Jackson was riding with Eileen, and we three Rich O’s co-owners dashed off from the Silo a few minutes ahead of the convoy to flick on the lights, tidy the pub, and make the barroom somewhat presentable for habitation.

Jackson appeared to enjoy himself, and was able to enjoy a fairly relaxed pint of Sierra Nevada Porter, his only full pour of the day. What’s more, his appearance at our pub set into motion another interesting tale that didn’t come to fruition until 2000, at a locale 1,000 miles away.

I’ll tell this story in part two, next Monday. Following are a few photos from a stellar evening; the first three from BBC, and the second three from the Silo.

* Jackson’s intended book about American microbreweries and their new-school beers never appeared as planned. The “microbrewing” scene was growing so rapidly in the 1990s that old-school publishing couldn’t hope to keep pace, and much of his research was reformatted for the new kid coming to the block, the World Wide Web.