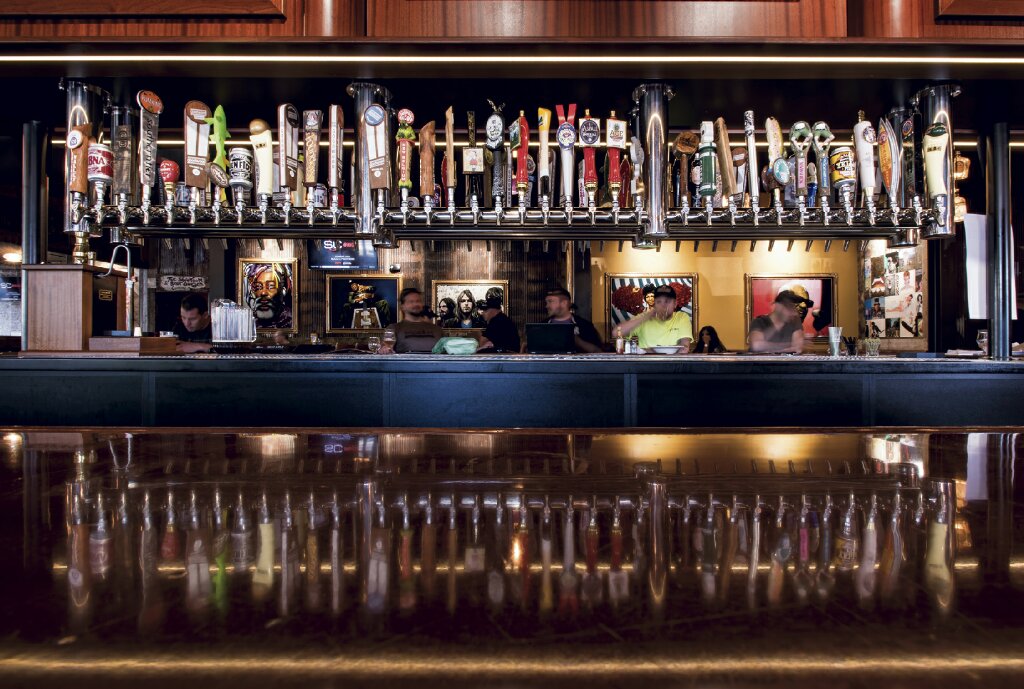 HopCat is a beer bar like the Rolling Stones are a rock band and LeBron James is a basketball player. Simple descriptions don’t always tell the whole story.

In fact, HopCat is a craft beer conundrum. It’s a growing Midwestern company boasting 12 regional locations, with more to come, and yet each one generally has more locally brewed beers on tap than nearby “indie” craft beer bars.

Uniquely tailored to their chosen neighborhoods, HopCat locations consciously seek to be as much a part of their community as the mom-and-pop joint right down the street.

HopCat garners national praise, but it soft-pedals superlatives, modestly describing itself as “a home for craft beer lovers,” as well as promoting recycling and sustainability, engaging with local breweries and beer geeks, and serving food “like mom would make if she loved craft beer.” That is, if your mom had room for an eye-popping 132 draft beers, which is HopCat’s signature.

Louisville’s HopCat opened for business in August near the intersection of Bardstown Road and Grinstead Drive. It occupies a refashioned commercial structure, seating around 500 (!) people amid two floors and a rooftop beer garden.

Perhaps the best way to understand HopCat’s conceptual lineage is to consider the traditional Bavarian beer hall, meant to function as a “beer city” within the larger expanse outside its doors.

The Bavarian beer hall is a showplace, built for the express purpose of accommodating huge nighttime crowds, and capable of serving beers and food to hundreds of guests as the oom-pah bands entertain, and the rafters gyrate.

However, the daily soul of a Bavarian beer hall is far more subtle. During non-peak hours, it plays host to a varied social tableau, harboring isolated nooks, colonnaded galleries, mysterious private rooms and outdoor seating areas where people from all stations of life take precious moments to relax.

Some have a bite to eat. Others drink steins of beer. Creased newspapers are passed from person to person. There are chess games, raucous conversations, sporting wagers and dreamy ceiling-staring.

In a pleasingly egalitarian way, HopCat reflects this timeless Bavarian culture, though it’s also the cutting edge where American craft beer’s older school meets its newest wave; after all, there are 132 craft beers on tap, as opposed to four or six at a beer hall in Munich.

HopCat’s 132 taps signify the dizzying proliferation of draft beer during our contemporary age. The new norm is 12 to 20 draft lines at a bar or restaurant, and there is much more to a successful draft program than meets the bar fly’s eye.

A draft system is complicated. A specialized contractor builds the draft systems for all HopCats, and in Louisville, the friendly folks at Drinkswell maintain it, because once the equipment is installed and the kegs are tapped, a fanatically rigorous approach to cleanliness is imperative.

Accordingly, HopCat’s 132 draft lines are cleaned twice monthly, which costs the bar more than Drinkswell’s fee, as any beer already inside a draft line is lost when cleaning takes place. This translates into two-and-a-half pints of beer per keg, multiplied by 132, or five kegs of beer a month willingly sacrificed to ensure quality.

It’s enough to make a grown man cry, but luckily, keg reinforcements are available in abundance, literally hundreds of them, as handled by a half-dozen Kentucky wholesaling companies, who represent dozens of America’s 4,700 craft breweries, in addition to vending product lines from overseas breweries.

Seen from this angle, 132 taps look more like a bottleneck than a cornucopia. Craft beer lovers have 132 savory choices at HopCat. Concurrently, HopCat has five or six times this number of beers from which to choose.

How to decide, and who makes the decision?
Chase Myers does.

On a humid, 90-degree scorcher in early September, I met Myers for the first time, only to find HopCat’s inaugural beer program manager swaddled in a thick winter’s hoodie.

“People ask me why I’m always wearing a sweatshirt,” he smiled. “It’s because I spend so much time in the walk-in cooler.”

Chilly beer coolers aren’t for the faint of heart. A standard American keg weighs 160 pounds filled, and in a world gone robotic, replete with selfie sticks, self-service buffets, self-checkout lanes at the grocery and even self-driving cars, one invention is lacking: the self-stacking, auto-tapping keg of beer.

Absolutely, so up the staircase we went, because HopCat’s walk-in cooler is situated directly above the main ground floor bar. A brightly lit space the size of a handball court, it is immaculately scrubbed and organized.

Gleaming stainless-steel kegs are stacked in rows on three sides, with lines and gauges all around. An imposing mass towering in the middle comprises HopCat’s core lineup of 20 non-rotating Kentucky beers, which Myers said would increase to 30 when practicable.
For Derek Selznick, the executive director of the Kentucky Guild of Brewers, HopCat’s Local 20 is the perfect deal-maker.

“HopCat offers a tremendous opportunity to highlight and push Kentucky’s craft breweries,” Selznick told me by email. “They feature beers from 12 different breweries in Louisville, Lexington and Paducah, which represents the great and growing diversity of Kentucky’s craft beer industry.”

Naturally, the same is true of HopCat outlets in Nebraska, Wisconsin and Michigan. Beer aficionados might grouse about the feline’s sheer size, but for local craft brewers, placement at HopCat is helpful, indeed.

HopCat’s craft beers rotate constantly, but its kitchen is the real foundation, anchoring the proceedings with an array of “homemade comfort foods.” They’re familiar, but with signature twists and numerous options to keep things interesting.

The pizza is Detroit-style, square and thick. Offbeat toppings include cheese curds, porter mushrooms and stout-caramelized onion. A custom blend of brisket and sirloin goes into each half-pound burger, but turkey and veggie burgers are available, too. The Mac and Cheese comes as is, or garnished with Polish sausage, fried egg salad or pickled jalapeños.

Crack Fries are the biggest seller on the HopCat food menu. They’re beer-battered (with Pabst, not craft beer), seasoned with herbs and pepper, and function as the American craft beer equivalent of Bavaria’s salty soft pretzel.

The pairing opportunities are infinite. Come to think of it, this may be on purpose.

Back at the bar, it was time to examine the oversized, color-coded HopCat beer list, which noticeably highlights the Local 20, then proceeds through the remaining 112, numbered and grouped by style: Ambers & Browns, Pales & IPA, Belgians, and more. Another section lists beers due for tapping soon.

“The menu is printed twice each week,” said Myers, “On Monday to catch up from the weekend, and again on Friday to get ready for the next one.”

The menu also serves as a convenient touchstone for HopCat’s two-pronged program of education, targeting consumer and employee alike.

I ordered a Falls City Kentucky Common and popped the questions: How do you choose 132 beers to pour at HopCat? Is there a top-secret algorithm? A sophisticated computer program?
Myers just laughed.

“No, not at all. I look at the wholesaler sheets, sample the beers and, every now and then, go online for some background.”

That’s it, folks; back to the basics, and oh-so-delightfully retro.
It isn’t easy being the kid in the candy store, though at HopCat, Myers is ensuring that Louisville’s craft beer lovers have a place to call home. We appreciate it.  F&D

Hip Hops: On June 3, Against the Grain Brewery & Smokehouse reanimates the mothership