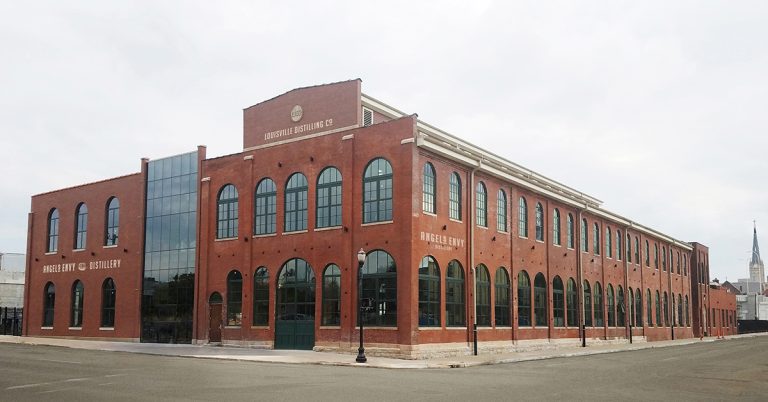 Two new Bourbon distilleries are opening this month, testament to the continuing confidence that Kentucky’s signature industry has a bright future. Jeptha Creed Distillery in Shelbyville, the first distillery in Shelby County since Prohibition, has already opened its doors, and Angel’s Envy, which has rather speedily renovated the long-abandoned Vermont America building at 500 E. Main St., across the street from Slugger Field, will open for distillery tours Saturday, Nov. 19.

Jeptha Creed is operated by the Nethery family, who have built their new distillery from scratch. The Netherys own and operate a dairy and grain farm near Jeptha Knob in Shelby County, the source of their company’ s name.  The family plans on growing many of the ingredients for their  bourbon, vodka and moonshine they intend to distill and bottle.

The most distinctive part of their grain bill is the use of open-pollinated, non-GMO heirloom Bloody Butcher corn which the family has been growing since 1845. The corn red-kernel corn is usually used as a fall decoration, but according to a story in  Insider Louisville, Joyce Nethery, the distiller, said this variety of corn has distinctive sweet and nutty flavor notes.

The Netherys plan to make a high wheat, a high rye and a four grain Bourbon. Since all Bourbon has to age at least two years in barrels to be Bourbon, Jephtha Creed also plans  to distill neutral grain spirits such as vodka and moonshine, which do not require aging, to get a cash flow going and to get their brand on the shelves.

Jeptha Creed Distillery, at 500 Gordon Lane, Shelbyville, is now offering distillery tours, between 10 a.m. and 6 p.m., Tuesday through Saturday at $10 per person.

Angel’s Envy will open its doors to visitors starting Saturday, Nov. 19. The $27 million facility will be the first full-production distillery in downtown. Angel’s Envy, too, is the brainstorm of a family, the Hendersons. Lincoln Henderson, a master distiller at Brown-Forman, developed the Angels Envy bourbon brand, but died last year. His son and grandson, Wes and Kyle Henderson, inherited the company.

Though the Hendersons sold the brand to Bacardi Limited, the Bermuda-based company that also owns Dewar’s scotch, Grey Goose vodka, Bombay Sapphire gin and more than 200 other brands, Angel’s Envy will continue as a stand-alone operation, under the guidance of the Henderson family.

Angel’s Envy Distillery will begin offering tours Saturday, Nov. 19. The tours, which include a tasting, will run on Monday and Wednesday through Saturday. from 10 a.m. to 5 p.m., and on Sunday, from 1 to 5 p.m Cost will be $15.