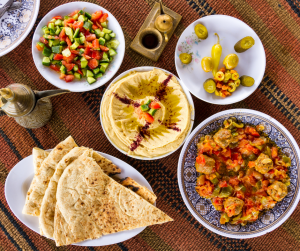 The food of the Middle East is becoming more popular in the United States as people have become more conscious about the foods that they consume. In fact, some Americans have converted to a Middle Eastern diet as an alternative to traditional American food. Americans tend to enjoy Middle Eastern food is because it is robust with flavor. The culture uses  many seasonings to flavor dishes.

Popular Louisville Middle Eastern restaurants incorporate many of the staples that are found in the traditional dishes of the region. Grains including wheat, rice, barley and maize make up the foundation of the Middle Eastern diet.  Herbal ingredients include: cumin, chili peppers, coriander and garlic.

Meats included in Middle Eastern dishes include chicken and lamb. Because of laws prohibiting the consumption of pork, it is excluded from Middle Eastern cuisine. Vegetables along with beans such as chickpeas and legumes are also used across different ethnic groups in the Middle East. It is possible to experience the fusion of the vast assortment of ingredients at popular Louisville Middle Eastern restaurants.

Although there are some similarities between the two styles, the dishes of the Middle East are quite different. There are some restaurants that market themselves as Mediterranean but a survey of the menu will help customers to make a distinction between the two.

There is so much more to Middle Eastern cuisine than hummus and kabobs although they are popular. One of the Louisville Middle Eastern restaurants that offers some other options is Shiraz Mediterranean Grill. The restaurant offers a menu of starters to include Tzatziki bowls, signature rolls and eggplant. Kabob options include Ground Beef, Steak, Chicken, Mahi-Mahi, Salmon and Lamb. Additionally, guests can order from a full menu of salads and wraps.

Falafel Oasis is another Middle Eastern restaurant that offers sandwiches, salads, and platters and beverages including Hot Arabic Tea. The restaurant offers cost-friendly price points and an upbeat atmosphere. Patrons have described the baklava at Falafel Oasis as the best in the city.

Louisville Middle Eastern restaurants are abundant in the city. Food lovers can enjoy tasting influences from various parts of the region which spans over 3 continents. What’s more, because some restaurants market to customers as Middle Eastern and Mediterreanean-style, patrons are likely to review selections from both cuisines.