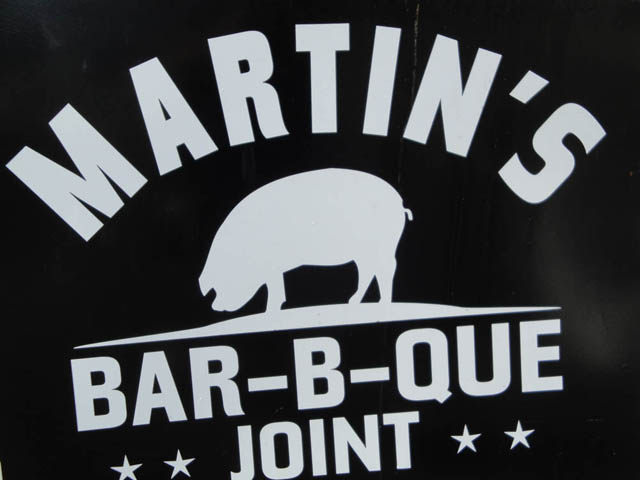 (Owner Pat) Martin said that although the restaurant is close to a few other barbecue joints and a lot of other restaurants, it will stand out on its own. He wants customers to embrace the fast-casual concept by ordering at the counter, but once a customer sits down with their food, he doesn’t want them to have to get up for anything.
– As reported in Louisville Business First (20 August 2018)

Martin’s Bar-B-Que Joint, a regional barbecue chain with outlets in Tennessee, Alabama and South Carolina, opened its first Louisville location in 2016 on Indian Lake Drive, just off Westport Road by the Watterson (I-265).

In Louisville directional-speak, this restaurant (which remains open for business) is described as being “you know, in the East End.”

The downtown/Highlands location of Martin’s Bar-B-Que Joint (984 Barret Avenue), which opened two and a half years ago and closed this week, citing pandemic losses, will always be remembered by more chronologically advanced Louisvillians as being “you know, where Lynn’s Paradise Cafe used to be.”

So it has been hereabouts, and likely shall remain. Dahlia Ghabour has the rest of the story at the Courier Journal.

General manager Carly Barmore confirmed the closure and said about half the employees would be moving to the other location of Martin’s in Louisville at 3408 Indian Lake Drive. “We’d love to see you there if you need some barbecue,” she said. “We’re so grateful to have been part of the community for the time we were, and we’ll miss you. But you can still get great barbecue across town.” The Barret Avenue location was previously home to Lynn’s Paradise Cafe for 22 years. After Lynn’s closed in early 2013, the location was empty for several years until Martin’s took over in 2017.