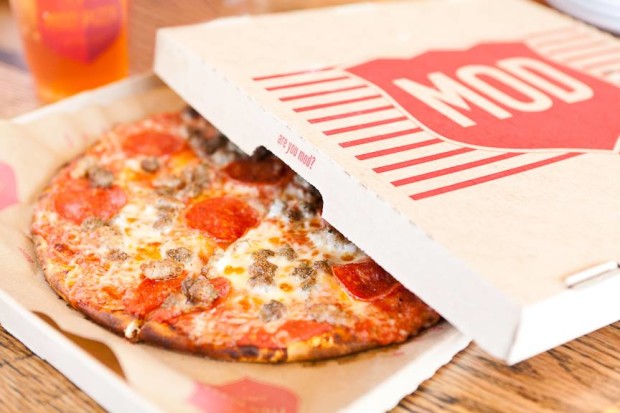 Another pizza chain, MOD Pizza, which originated in Seattle and has outlets along the West Coast and throughout the Midwest, is opening its first Louisville location today. The Grand Opening will be at 3085 Breckenridge Ln., in the Hikes Point area.

MOD makes artisan-style pizza and hand-tossed salads. Their niche is super-fast individual pizzas, with a choice of over 30 toppings, all for one price, according to its website. In typical West Coast fashion, it names its pies memorably:   The “Calexico,” with mozzarella, gorgonzola, jalapenos and hot buffalo sauce; the “Caspian,” with mozzarella, gorgonzola, barbecue sauce and red onions; and the “Lucy Sunshine,” which features artichokes, garlic and red sauce.

Patrons can also  build their own pizza, from that choice of two dozen or more toppings. The rest of the menu includes salads, bread sticks and milk shakes.

According to a press release, “MOD is committed to supporting its local communities. For grand opening day, MOD will be donating 100% of net profits from all pizza sales to the Louisville Chapter of USA Cares, to support their mission to assist military families in crisis.”

Also, the first 52 people in line will receive free individual artisan-style pizza or hand-tossed salad. There will also be a “Win free pizza for a year” contest at the opening.