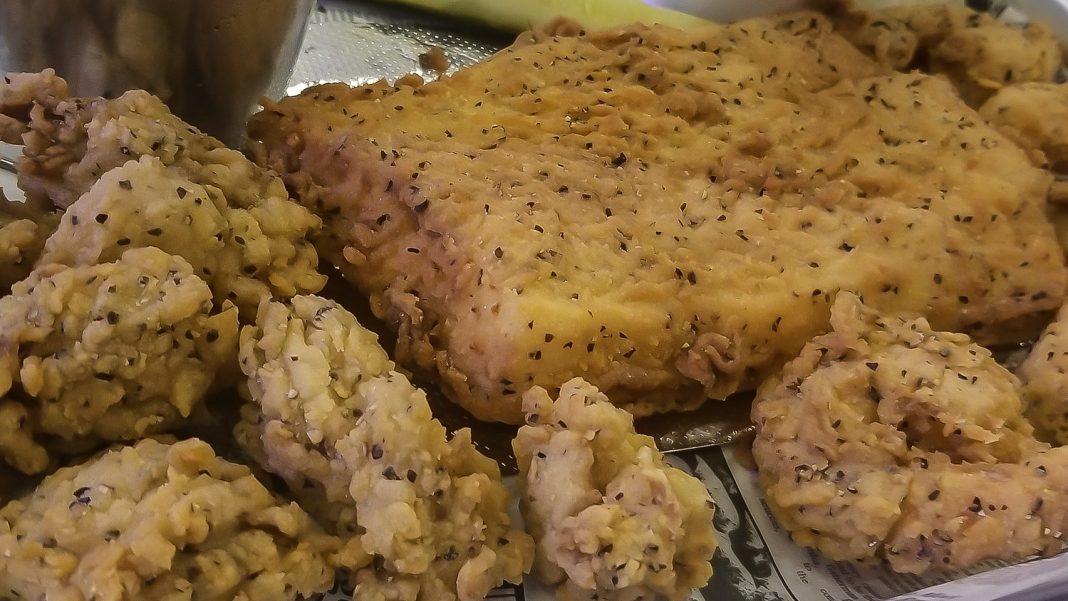 Hooked on Frankfort, 3200 Frankfort Ave, opened last Tuesday, and business has been great despite an initial delay with their beer/wine license. Now, they are full swing and provided great service last night even though the restaurant was absolutely packed.

We popped in to sample some of their dishes and met co-owners Mr. and Mrs. David and Kim Alvey, who own both Frankfort Avenue Beer Depot (two doors down and started with his brother Robbie Alvey 15 years ago) and Hooked. Kim said they have owned the building Hooked is now in for three years, but they were just using it for storage.

“I noticed I was selling a lot of fish sandwiches out of the barbecue place,” said David. “This spot became available, and we were kind of looking to do some other things. I didn’t want to stretch myself too thin, so I thought ‘what better opportunity than to do something where I could be right next door’.”

It’s imperative that the restaurants are near each other, because David still works in both kitchens. He said his day runs from about 8:30 a.m. to 1 a.m. Kim was working in the dining room, serving customers while we were there.

David went on to say that they wanted to create a seafood place in the neighborhood that had a good amount of seating. There will be even more when their lovely patio opens soon  – hopefully next week. He is a big fan of Mike Linnig’s in the West End and wanted to create something like that in the East End: a family friendly place to get some great seafood.

The menu is affordable, including their beers and wines ($2 to $5 beers and $5.00 wines). There are starters (ranging in price from $7.95 to $11.99) you would expect at a seafood joint like mozzarrella sticks or jumbo shrimp cocktail, pan seared scallops, and also fried calamari, loaded fries with cheese, onion, bacon and ranch.

There are a couple salads and soup options: a garden salad with or without chicken, clam chowder and a soup of the day.

Entrees range from $9.99 for the “Hooked on Frankfort Fish Sandwich” to $22.99 for the “Hooked on Frankfort Sampler Platter,” which comes with fried fish, shrimp, oysters, fries, and hush puppies. Other menu items include clams, frog legs, fish nuggets, catfish, crab cakes, blackened or grilled salmon, and fish tacos. All of the entree items an be served as an order or as a “plate” for three dollars more. Plates come with fries, slaw and hush puppies.

When we arrived, we discovered the restaurant is “seat yourself,” and found one of the few open tables that filled quickly. We were greeted at different times by more than one employee within a couple minutes. It was also impressive how clean the restaurant was on such a busy night. It wasn’t long before we had drinks in front of us, and the food also arrived with great speed.

We sampled the platter, blackened salmon, grilled shrimp, and the fish tacos, and everything was cooked with great care for delicious results. The fried seafood in the platter had a peppery breading with just the right amount of crunchiness to it. It gave a satisfying crunch without tasting overcooked or being too greasy.

The grilled shrimp were spiced up and delicious, and the blackened salmon was also cooked just right with a delicious amount of flavoring. Spice is a recurrent theme, and the fries are also spiced up. They reminded me a little of boardwalk fries I’d have as a child in Ocean City, Maryland.

The real star for me was the fish tacos. They feature white fish, cabbage, avocado, pico, and a house sriracha aioli sauce, which was good enough for me to not want to miss the little drips of it on the paper.

There was one more big hit: the spicy tartar sauce. The Alveys said they make everything in house, and this spicy rendition of the seafood classic is a knock-out.

While it isn’t the fanciest spot on Frankfort Ave, it is sure to be a new neighborhood favorite with good folks, good food and good service. They are open 10 a.m. to 10 p.m. every day of the week.