Home CHEFS Oh, the chefs, they are a changin’ 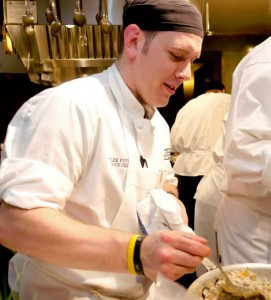 Less than a month after he was made executive chef at the St. Charles Exchange, Tyler Powell is on his way to The Silver Dollar, the red-hot honky-tonk in Clifton, where he’ll assume the same title.

Powell had recently replaced Patrick McCandless as the executive chef at the one-year-old St. Charles, but apparently had been in talks with Silver Dollar operators for some time about the move.

Sources at the St. Charles Exchange said they are busily interviewing replacements for Powell.

In his new role, Powell will oversee the kitchen at the Silver Dollar and allow current executive chef Jonathan Schwartz, to focus fully on developing the menu for El Camino, located in what was formerly Avalon on Bardstown Road.

Schwartz is charged with developing a Mexican street food menu and we’ve that into the concepts Tiki bar theme.

Originally, when the partners bought the Avalon building, they had hoped to open the new restaurant by late spring of 2013. But as they began working in the facility they decided instead to all but gut the structure to ensure their vision was fully realized. When finished—the recent projected date is August—it will include a Mexican bakery on premise.

* Speaking of chefs on the move, Andy Meyers, chef at The Anchorage Café until February, reportedly worked in the kitchen at 610 Magnolia over Derby weekend.

Chef-owner Edward Lee and chef de cuisine Nick Sullivan were headed to New York that weekend for The James Beard Foundation Awards. (The occasion marked third time in Lee’s career he was nominated for Best Chef Southeast. Unfortunately, he did not win.)

Since leaving the Anchorage Café, Meyers worked briefly at the Holy Grale and on some independent projects. We will let you know as soon as we hear where he lands.

* Michael Hungerford’s departure as chef at Coals Artisan Pizza a month ago has not seen him resurface in the city, nor has his post in front of that blazing oven been filled—at least as far as we  know. Talented chef, great position open.