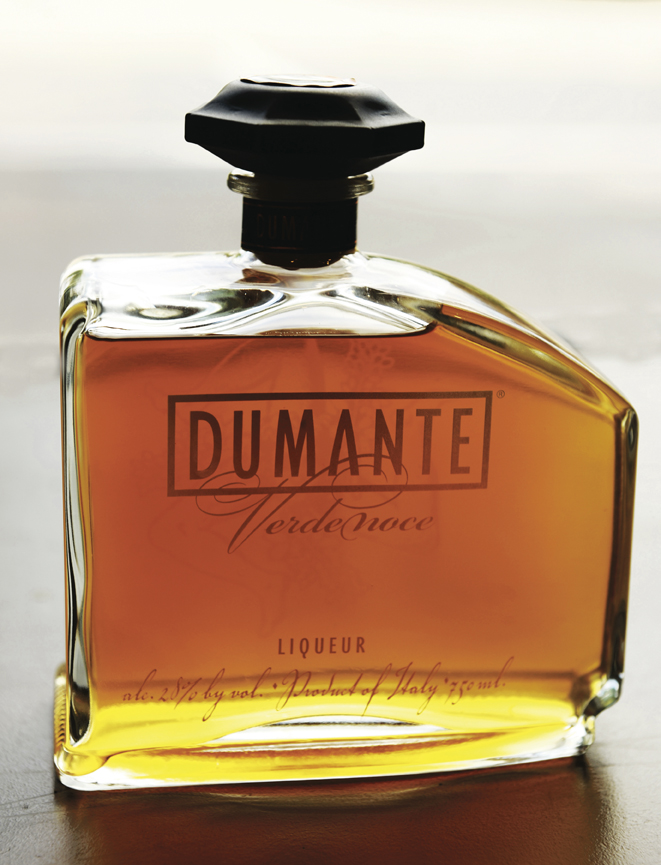 Have you tried Dumante, that ancient nutty liqueur sipped for ages in pistachio groves of Sicily?

Don’t feel bad if you haven’t, because Dumante has only been out since Fall of 2007, although its rich, sophisticated taste and elegant packaging suggest a more established product. The brainchild of local attorney and entrepreneur, Horward Sturm, Dumante was conceived to replicate the hand-crafted liqueurs he had on his travels through Italy.

Dumante Verdenoce is an ultra-premium Italian pistachio liqueur. I first heard of Dumante around three years ago, while the product was being developed. I was given samples and asked what I thought about the product. Although I prefer a product like Dumante unadulterated, I could see its mixing potential. One recipe I came up with was a whimsical version of spumoni ice cream, with Dumante pistachio liqueur, chocolate liqueur, and strawberry liqueur. The drink was dubbed Passionata and now hangs from the neck of each bottle sold.

Although Dumante is produced in Italy, it is an idea hatched here in Louisville by Sturm and his partners. Through his travels in Sicily and other parts of Italy, Sturm had tasted

similar products, but they were produced and consumed locally, usually by individual families. His idea was to bring a sophisticated product to the market to rival other world-class cordials, like Grand Marnier or Drambuie.

The base for Dumante is molasses alcohol made by a small distillery off the Amalfi coast of Italy, that has been around since the 1800’s. Infused with a distinctive nuttiness, Dumante is slow steeped with Sicilian pistachios and other natural flavors. Being a skeptical consumer, I had to ask about “other natural flavors.” Turns out, that refers mostly to the five different types of vanilla, including Madagascar vanilla, that rounds out the liqueur’s nuttiness. Good answer. And speaking of those Italian pistachios, Sturm told me that others had offered to replicate their flavor chemically and save him money on production.  I think his refusal to cut corners adds a weightiness in the mouth-feel, and I even get a touch of salinity from the amber colored liqueur, which only adds to its warm pistachio flavor.

Sturm’s ambition to create a world class product doesn’t stop with his commitment to using quality products. Dumante is bottled at fifty-six proof, higher than most sticky sweet

liqueurs, that appeals to brandy and straight whiskey drinkers. And then there is the bottle itself. A heavy vessel of thick cut glass with a distinctive, almost art-deco, appeal. A bottle of Dumante will sit nicely next to any decanter of cognac or scotch.

Local bartenders are taking Dumante and inventing new cocktails with it, or re-inventing classic cocktails, like the old-fashioned. The Dumante website,  HYPERLINK “http://www.dumante.com” www.dumante.com, is full of recipes like The Artisan, a combination of Dumante and vanilla vodka, or the Sicilian Manhattan, that replaces the sweet vermouth with Dumante and adds blood orange bitters. Of course, neat in a snifter, or just a few cubes of ice, works as well.

Sturm also has a strong commitment to the arts and sees Dumante as part of a cultured lifestyle. It seems like almost any night of the week, Sturm and Dumante will be featured at an event involving good food, like Sullivan University’s “Savory Culinary and Cocktails Challenge,” charity, like Dare to Care’s “Taste of Derby,”, or music, featuring several events with local favorites Carly and Craig. Sturm’s ambition for Dumante’s placement in the world of arts and culture even has Dumante as the sponsor for a performance of jazz legend Bela Fleck this fall in Louisville.

And as for the future of Dumante, Sturm says he is still steadily building the product, even in these recessionary times. Dumante is currently in four major markets, including

Louisville and Connecticut, and has plans to expand to four or five more in the near future. To help achieve these goals, Sturm has recently hired Lucca Bianchiccini as Dumante’s new COO. Bianchiccini is a local favorite in the spirits world. Formerly of Republic National Wine and Spirits (and a pretty good rock drummer), will bring his near two decades of experience in the spirits industry to help catapult Dumante into the rest of the country, from its humble Louisville roots.

Here are a few cocktail recipes using Dumante Verdenoce, including one of our favorites, the Sicilian Manhattan. For more drink ideas, visit their Web site – www.dumante.com.

Cut an orange garnish and lightly coat chilled Martini glass on rim and interior with orange skin and zest. Shake all ingredients with ice, strain and serve. Add orange garnish.

Coat the rim of a brandy snifter with brown sugar syrup and ground pistachios. Shake ingredients with ice and strain into Brandy snifter. Garnish with lemon wedge and fresh mint.

Combine ingredients and shake (no ice); poor into a white wine glass. Top with whipped cream, grated nutmeg, and a miniature candy cane.

See this story in the original PRINT VERSION —  Winter 2009