Home MAGAZINE ARTICLES COLUMNS Rye Not? — The Other American Whiskey 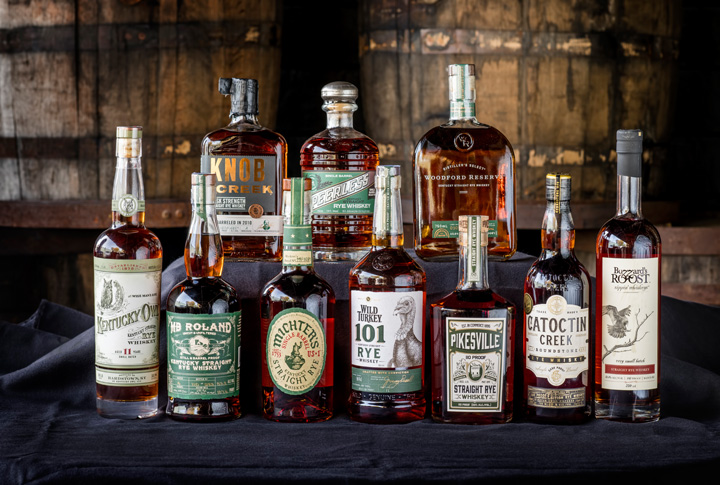 Bourbon drinkers are aware that their favorite whiskey, while distilled from a fermented grain recipe that is mostly made up of corn, usually also contains a fairly large percentage of rye, as well as a portion of malted barley. In the whiskey industry, rye in this context is referred to as a “flavoring grain.” Most bourbons are about three quarters corn. But some have quite a high rye content. The B mash bill for Four Roses, for example, is 60 percent corn, 35 percent rye, and five percent malted barley.

Occasionally (in about 20 brands nationally out of hundreds), wheat is used as the flavoring grain. Even more rarely, both will be used. Or some different grains entirely, such as rice or oats are included. Nonetheless, rye is the flavoring grain of choice for bourbon. It adds spice and backbone to the sweetness coming from the corn.

(By Susan Reigler. Originally published in the Winter 2019 issue of Food & Dining Magazine)

But, while bourbon is America’s “native spirit,” as defined by an Act of Congress in 1964 declaring that bourbon is “a distinctive American product,” a different whiskey was the darling of American drinkers just after the Revolutionary War. Rye whiskey, where corn was the flavoring grain, was king. Or perhaps, more fittingly, president.

The proprietor of one of the largest commercial whiskey distilleries in the United States at the end of the 1700s was George Washington. Turning grain into whiskey was a great value multiplier for the crop, since it could be converted to a non-perishable product and shipped easily. So, most farmers, including Washington, were also distillers.  (Similarly, excess fruit was distilled into brandy.)

Unlike other farmers, Washington employed an immigrant Scot named James Anderson, who built and ran his Mt. Vernon distillery as a large-scale enterprise. Upon Washington’s death in 1799, it was producing more than 10,000 gallons of alcohol per year which supplied taverns in Alexandria, Baltimore, and beyond. The Mt. Vernon rye had a mash bill of 60 percent rye, 35 percent corn, and five per cent malted barley. It was not aged (therefore clear in color) and sold as “common whiskey.”

Today Washington’s distillery has been recreated (with stills made at Louisville’s Vendome Copper & Brass Works) and a limited amount of both aged and unaged rye is made and sold at  Mt. Vernon.  George Washington’s Straight Rye is aged four years, uses the historic mash bill, and is 86 proof.

Rye was a grain that grew well in New York, Pennsylvania, and Maryland. So historically rye was the whiskey of choice in those states even as distillers west of the Appalachians were building the corn-based bourbon whiskey industry. The Manhattan cocktail, invented in New York in the late 1800s, was originally made with rye, as well as sweet vermouth and a dash of bitters. Well into the 1980s, that’s how it was served in New York. But one indicator of bourbon’s ascent is that now, when you order a Manhattan in Manhattan, the vast majority of the time you’ll be asked what brand of bourbon you want in it.

The other leading rye cocktail has been the Sazerac of New Orleans. It came on the scene a bit later than the Manhattan and was the drink of choice at the eponymous Sazerac House on Royal Street (a new version of which has recently opened on Canal Street) and the Absinthe House, which dispenses cocktails to this day at the corner of Bienville and Bourbon Streets. The cocktail was heavily promoted by Thomas H. Handy, a maker of bitters who acquired the Peychaud’s brand.

To make a Sazerac, add a sugar cube and a little water and muddle to mixing glass. Add two ounces of rye, a couple of dashes of Peychaud’s bitters, ice, and stir. Rinse a rocks glass with absinthe, discard the excess and strain the whiskey and bitters into the glass. Garnish with an orange peel.

Rye whiskeys, which have always been the brown spirits of choice in Canada, still play second banana to bourbon in the United States. But thanks to demand from whiskey drinkers who favor the bolder, spicier character of rye and to distillers around the country (including many in the Midwest, West, and mid-Atlantic, more different ryes are available now than since before Prohibition. They have the second largest number of brands after bourbon.

Few ryes produced elsewhere are available here, but Kentucky’s legacy bourbon distilleries have taken note of a rise in rye’s popularity and most are making at least one. The bottlings from the Bluegrass State tend to feature near the bare minimum of rye (51 per cent) required in order to be classified as rye whiskey. Like bourbon, they must be aged in new charred oak barrels. Here, in alphabetical order, are 11 from Kentucky, and one from Virginia, that can be found on local retailers’ shelves. Experiment with all in a Manhattan or Sazarac.

Sourced from MPG in Indiana but given a secondary finish in proprietary barrels with specially carved staves. Packed with fruit and spice.  A Christmas pudding in a glass.

This has a 100 percent rye mash bill. Lots of herbal rye grass and spice character, supported by plenty of caramel.

Vanilla and hazelnuts with rye grass and orchard fruit. F&D