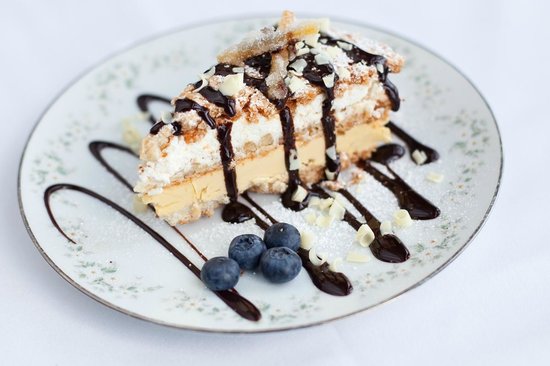 I have for some time now been waiting to see when Louisville’s restaurant scene is mentioned in Saveur, the national food magazine, now that Louisvillian Adam Sachs is the editor. It’s not like I didn’t introduce him around to several restaurants and chefs when he was here a few years ago to judge a bacon-cooking benefit, after he won his Beard award for magazine writing, but before his newest gig. Well, finally, we see some home-town attention.

Saveur’s website (I have not received the March issue yet, so I am not sure if it is also in print) has a good story about the mocha dacquoise that has been a mainstay of the dessert selection at Buck’s, 425 W. Ormsby Ave. for a long time now. The web story even has a video showing the construction of the cake.

In the article, the author, Matt Taylor-Gross considers how the textures and flavors of a dacquoise, made with layers of baked meringue, please him more than mere cake does, and cites several versions at Manhattan restaurants, before he makes this wise pronouncement: “The best dacquoise I ever tasted wasn’t in Manhattan, though. It was in Louisville, Kentucky. At a quarter-century-old restaurant called Buck’s, which is located on the ground floor of a historic apartment building in the city’s Old Louisville neighborhood.”

Taylor-Gross then goes on to cite several other Louisville restaurants that impressed him on a visit two years ago (I didn’t realize there was that big a lag time in monthly magazine publishing rhythms): Seviche, Proof on Main, Harvest, Doc Crow’s, the Seelbach bar, even Check’s. Then he says he asked around about lesser known places he should try, and he is guided to Buck’s.

He is impressed by the elegant decor, a “polar opposite” of the trendy faux-rustic, retro-casual style of so many places. “The dining room is painted the darkest of blues; providing contrast to the hundreds of white flowers that reside in small vases throughout the dining room and bar area. The tablecloths are white. There are chandeliers. There’s even a piano. Sitting at the restaurant’s bar, festooned with a Royal Wedding’s-worth of flowers, I felt like a little kid at a fancy restaurant my parents had taken me to because they couldn’t find a sitter.”

The dacquoise itself seems to him a throwback too, looking “like something straight out of an old Time-Life series come to life.”  He likes it. A lot.