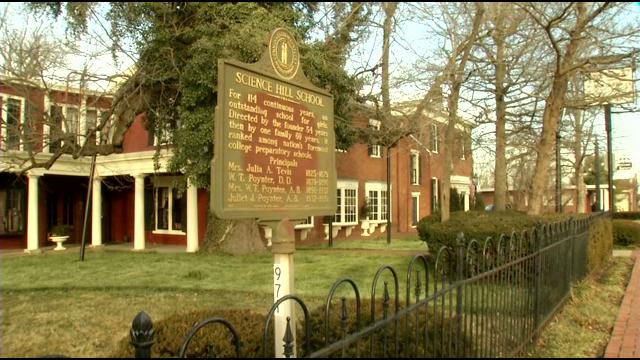 We reported earlier that Science Hill Inn had closed due to an illness in the McCarty family that had run the restaurant. We are now happy to report that the renowned Shelbyville restaurant is opened again, under new ownership, with a new name and new kitchen crew. In addition, a small pub at the rear of the restaurant has been resurrected, and is serving food and drinks in the evenings.

The restaurant in the Science Hill complex that also houses the Wakefield-Scearce galleries, now known as the Georgian Room at Science Hill, is open every day but Tuesday 11:30 a.m.-2:30 p.m.  The menu remains focused on traditional Southern-style cooking, served from a menu every day except Sunday lunch (not brunch), when service is buffet service, with the same hours.

Chefs Charles Rice and Joey Woods are the new team in the kitchen. Among their featured dishes are fried chicken, a Hot Brown served in a miniature cast iron skillet, Louisiana shrimp and grits, goat cheese-stuffed hamburger and chicken salad.

A smaller space at the rear of the restaurant has once been a pub, but for 30 years or so has been used as a storage area. Newly refurbished as an English-style pub, The Red Lion has opened again. The pub seats 25 people, has a full bar and serves dinner from 5:30 until 10 p.m every day but Tuesday. Bar service continues later than 10 for groups who wish to stay to watch ballgames on the TV. The menu changes often, but currently diners can find “Pork and Beans” – pinto soup beans topped with slabs of slow-roasted pork belly, hot Tennessee chow chow and a side of jalapeño corn fritters; “The King” – a 1/2 pound burger with peanut butter, onion marmalade, bacon and cheddar; a “German Banh Mi” – beer-braised cabbage and grilled kielbasa, topped with cilantro, pickled radish and carrot and Sriracha; and “Shep’s Pie” – a traditional shepherd’s pie with some “Kentucky styling,” according to a press announcement.

Inquiries about and reservations for both The Georgian Room at Science Hill and the Red Lion Pub can be made at (502) 512-3663.