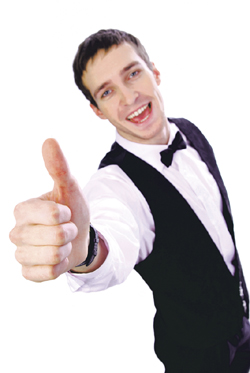 If you are growing weary of hyper-descriptive menus making implausible claims about the ancestry of their radishes, you are not alone.

I too have noticed this escalating trend, which results in turgid descriptions like the following:

I can be silent no longer. Cleary, this sort of thing is a threat, if not to diners than to the English language, and it must be stopped.

It started innocently enough, I believe, with the “locally sourced” movement. Chefs highlighted locally-grown produce that could be sourced dependably enough to put on their menus. Then, as the trend gathered steam and demand increased, it merged with easily exploited environmental claims regarding “carbon footprint” this and that. More and more “locally sourced” ingredients began to appear, some of which set off my own personal alarm bells as they cannot actually grow in locally offered conditions. Finally, in its most advanced stages, we as diners are asked to essentially believe that the tri-county area is a magical Eden tended by Keebler elves who herd miniature Kobe cows and Alaskan salmon beneath forests of spring pears and year-round, singing, perennially fructivating strawberry trees.
Now, couple this locally-sourced stuff with ultra-specific claims regarding which remote Irish cove this cockle was collected from by Fenian nationalists, and you have a recipe for balderdash. I might have cared about this for, like, a minute, five years ago, but I do so no longer. I do not care if a beet’s forefathers came over on the Mayflower, or that this particular oat was worshipped by the Mighty and Terrible God-Priests of the Toltec Empire. What I care about is how it tastes.

Trends are a part of the ever-shifting seascape of cuisine of course; there is a constant ebb and flow. What is fashionable one year is passé the next. This turnover serves to refresh and reinvigorate and is an indispensible part of dining. However, fashions in dining can also be reactionary instead of inspired, and this can do a disservice to cuisine. Shouldn’t the desire to plate up great tasting food be front and center instead of in what neighborhood the lettuce grew up? Besides, some things just grow better in one part of the country than in the other, and to choose something just because it came from closer by can hamstring the primary point of dining out in the first place: the taste. As a chef friend inNew Yorkput it, “I’d rather eat a good tomato from 300 miles away than a crappy tomato from 3 miles away.”

Which brings me to another sad point: I believe that in jumping on the “locally sourced” bandwagon, lots of chefs, frankly, lie. There is, to the best of my knowledge, no regulatory oversight about this kind of thing. Because carrots don’t carry passports, chefs can say pretty much whatever they want. Who’s going to stop them? Mike Wallace doesn’t work for the Food Network, and even if he did, it’s likely that GE’s thugs would threaten to roast him alive in a Monogram 30-inch dual-fuel double wall oven if he got too close to the truth. Also, we want to believe chefs. We are part of the problem.

I get PR announcements all the time which cheerfully burble that “Chef So-and-So uses only the freshest and locally sourced produce to…” I’m sick of seeing that. Not only do I generally not believe it but I question that, even if it is true, does it really offer a diner a special experience? What is the point of spending a lot of money on a meal if there is no adventure to it? Source what you can locally and don’t feel bad about the other stuff. Personally, if I spend $76 on a Kobe steak, I want to believe that that steak flew business-class from Kyoto to Chicago. I want to picture that steak in an Airbus A-380 with a seatbelt across its little steak lap and a martini in a top-deck seat with 180-degree recline. I want to see that steak’s boarding pass. And if I must, God-forbid, eat a brand-name steak that doesn’t come from overseas, say, Niemen Ranch, I’d like to believe it flew to the restaurant in a chartered Gulfstream V. Alone. But don’t tell me all this; let the food do the talking, not the menu, and my imagination can take care of the rest.