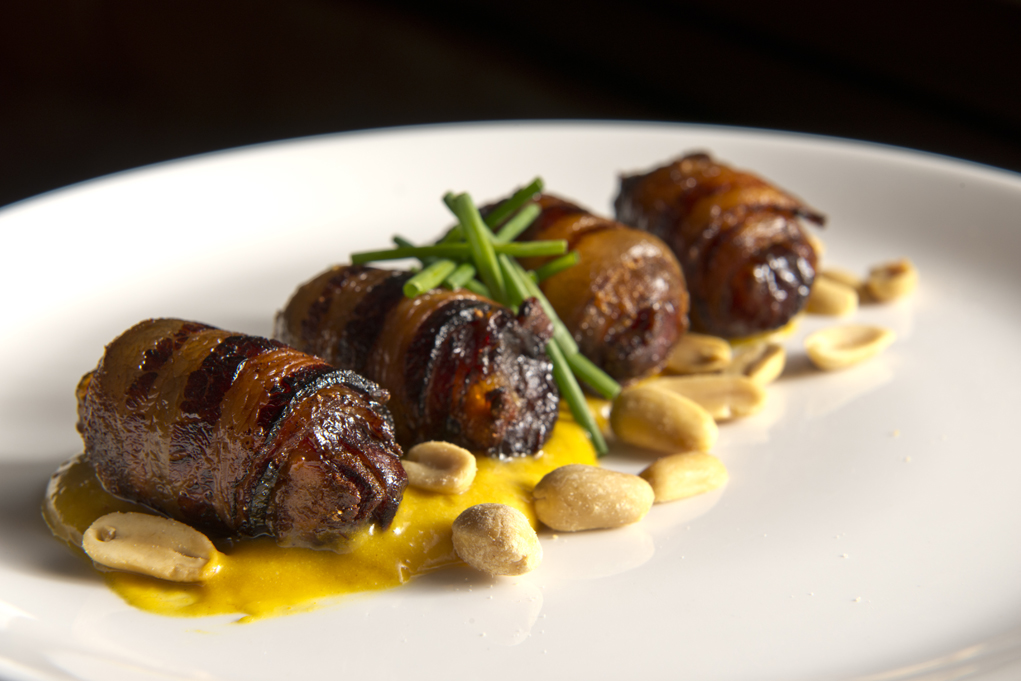 TThrough their décor and menu offerings, many restaurants in Louisville transport you to another place, but St. Charles Exchange transports you to another time. Open just since Derby 2012, it already feels like it’s been welcoming visitors since the turn of the century — the 20th century.

The Victorian-era building has a kind of tucked-away feeling, located as it is on Seventh Street just south of Main and across from 21C. With high ceilings, exposed-brick walls and floors of polished reclaimed barn wood, St. Charles Exchange could be loud and impersonal, but its hard edges are softened by the lush, bourbon-hued drapes on the floor-to-ceiling windows and a black leather banquette that runs the length of the main dining area. Sofas and chairs define a cozy lounge area inside the front door.

The entire right side of the room is dominated by an ornate black bar with nearly two dozen stools, where bartenders wearing flamboyant shirts and suspenders take their time crafting cocktails and chatting with their customers, encouraging them to linger. Sitting here, it’s easy to imagine you’re in the lobby bar of the St. Charles Hotel, which occupied the building from 1866 to 1888.

“That’s the feel we were going for,” said owner Amy Hoffmann Frey. “There is a lot of history here.”

The colorful history of the building at 113 S. Seventh St. includes its use in 1873 as a hideout for a gang of bank robbers led by master forger Walter Sheridan, according to the book “Professional Thieves and the Detective” by Allan Pinkerton.

While one group of thieves was digging at night toward the vault of the Falls City Tobacco Bank, Pinkerton writes, the others “were posted in a front room over the St. Charles restaurant immediately opposite” keeping watch. “In this manner the thieves had an abundance of time and leisure, and finally effected an entrance to the vault… when they carried away almost everything of value the vault contained,” he concludes.

After the hotel closed, the building housed the Bernheim Bros. bourbon distillery and warehouse. A wall made from barrel staves in the restaurant’s private dining room gives a nod to that chapter of its story.

“The name St. Charles came from the building, of course,” Amy Frey said. “‘Exchange’ is what they used to call hotel lobby bars in the early 1900s. They were a place for people to exchange social graces and make business exchanges. But Louisville was also a big city of exchange because it was a river town. It all tied in.”
She and her husband, Rob Frey, and investor David McGuire opened St. Charles Exchange with family and friends of the Freys from Philadelphia who operate the Franklin Mortgage & Investment Co., a speakeasy-type bar, and Lemon Hill, a restaurant and bar in which they partnered with noted Chef Mitch Prensky of Philadelphia’s Supper restaurant.

Prensky created St. Charles Exchange’s initial menu, which promised innovative variations of classic items from the turn of the century – the Elvis on Horseback appetizer, for instance, a twist on Devils on Horseback that features banana vinaigrette with bacon-wrapped, peanut butter-stuffed dates.

Several months in, chef de cuisine Patrick McCandless, an Indiana native who studied culinary arts at Sullivan University, became head chef, and the menu has evolved to include more regional cuisine under his direction – see the Kentucky Hot Brown Monte Cristo and Pork Belly Reuben. “I wanted to focus more on the Southern-style cuisine and the great products Kentucky has to offer,” he said. “I have also been working closely with local farmers to get the freshest products that are in season.”

Some of the restaurant’s most popular items are its daily selection of deviled eggs; the root beer chicken wings; the scallops with country ham; and the St. Chuck Burger, an 8-ounce lamb patty on an English muffin.

McCandless has added more vegetarian options to the menu and plans to incorporate some low-country influences in the future as well.

Even more than its food, St. Charles Exchange quickly became known for its retro-inspired cocktails, complicated concoctions involving exotic ingredients like absinthe, Benedictine and Pimm’s. Many incorporate the bar’s house-made syrups – ginger, grapefruit, cinnamon and such – and all are served over the proper kind of ice, whether crushed or formed into a rock that will melt slowly, so as not to water things down.

The cocktail program is overseen by bar manager Colin Shearn, a well-known bartender whose drinks have been featured in national publications. As general manager of The Franklin in Philadelphia, he originally served in a consulting role at St. Charles Exchange, but he fell in love with the restaurant and the city and moved his family here.

He brought with him The Franklin’s “punch bowl” concept – large-format servings of whatever punch recipes are on the current menu, meant to be shared by six to 10 people. “It’s one of my favorite things to see at the bar – a communal experience bringing people together,” he said. “It’s almost impossible to have a bad time drinking a bowl of punch.”

While St. Charles Exchange is located just off Louisville’s historic “Whiskey Row,” where a bourbon renaissance is taking place, one thing you won’t find there is a list of 50-plus bourbon brands. The Exchange has a respectable bourbon list and features the spirit in several cocktails, but quantity isn’t Shearn’s goal.

“I think curation is one of the most important, and often overlooked, aspects of a bar program,” he said. “Sure, I could bring in 100 more bourbons. But why? The back bar is only so big, I can only expect my staff to know so many products, I don’t want to carry an extra $5,000 in inventory. I also just edited the cocktail list. I want it to cover a certain amount of terrain, spirit and flavor wise; I want it to be fun and exciting. What I don’t want is for people to be intimidated by two pages of esoteric ingredients and flavors they’re not familiar with. That’s not fun for anyone.”

What is fun is being behind a bar that so defines a space – both literally and figuratively. The vintage feel that St. Charles Exchange seems to have effortlessly achieved in just months is due in no small part to that “grand old hotel bar” vibe, Shearn said.

It hasn’t happened yet, Frey said, but “I wouldn’t be surprised to have someone come in here and ask, ‘Where do we check in?’ You never know.”