Home CHEFS SuperChefs to open again in the Highlands 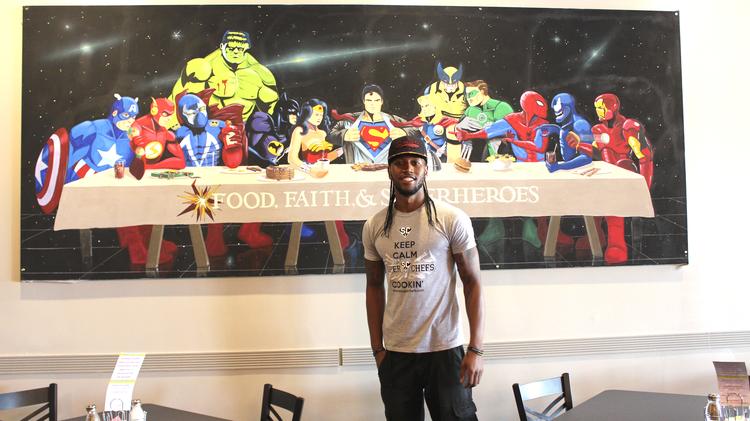 It has been a rather dizzying year for Darnell Ferguson, self-styled SuperChef. Last year about this time he was getting ready to open his own restaurant, after having developed a reputation with a series of popup restaurants in Louisville and elsewhere. His St. Matthews restaurant opened with considerable éclat, but then it took the brunt of a fire in January that affected several restaurants along the row on Fairfax Ave. Now, he is preparing to open Superchefs again, this time at 1702 Bardstown Rd., in the space that briefly had been Strati Wild Italian.

While the new space will be smaller than what he had in St. Matthews, Ferguson is happy to be locating along the well-traveled Bardstown Rd. restaurant corridor. He will keep his funky comic book themed decor and menu concepts, with a new twist: he will celebrate superheroes during the day, and their villainous opponents in the evening.

After the trauma of the fire, Ferguson got lots of media attention, including some national exposure on the Rachel Ray show, and he met with and got advice from Emerial Lagasse.

SuperChefs plans a soft opening July 9, the anniversary of his St. Matthews store opening last year. Menu favorites such as red velvet pancakes, eggs Benedict, and the green waffle “Hulk” sandwich with candied bacon, craft sausage, eggs, cheese and syrup will be featured. The new restaurant will be open for breakfast, lunch and dinner, but will close between 3 and 5 p.m. to convert the space from the superheroes theme to the night-time super-villains theme.