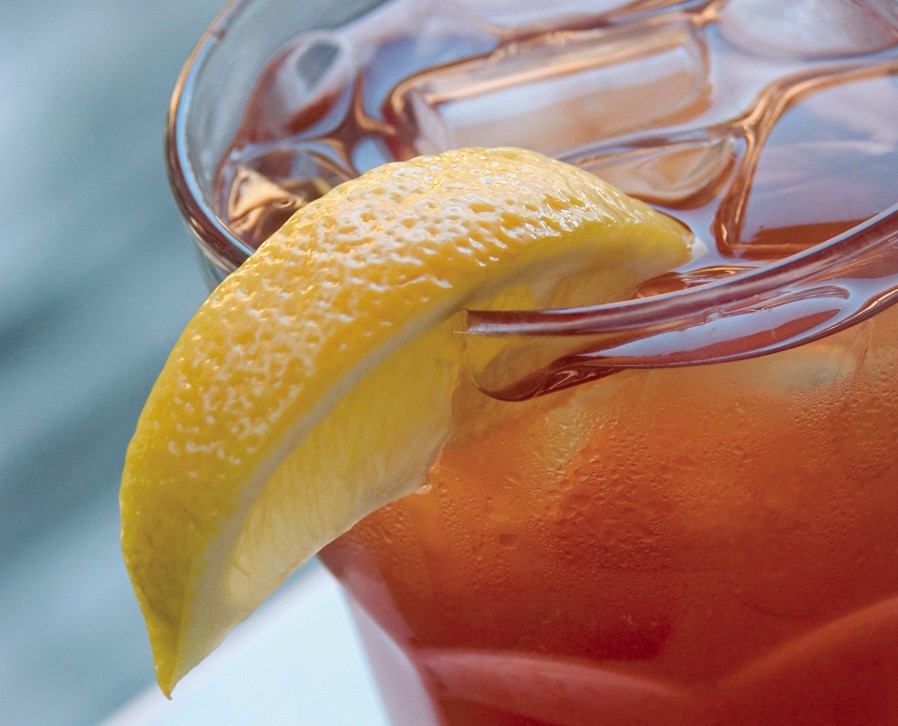 It starts making its appearance as you cross that mythical, yet definitive boundary that is the acclaimed Gateway to the South — the Mason-Dixon line. It is found in the land where the term “y’all” permeates in every conversation, where Alabama and Georgia football games are considered national holidays and where honey is the only thing that can accompany butter on biscuits. You have encountered the house wine of the south, sweet tea.

(Originally published in the Summer 2012 issue of Food & Dining)

Sweet tea, that clear, orange-to-red tinted elixir, is brewed long and strong to hold up to the assault that will come when introduced to 1 ½ or more cups of sugar per gallon. Then it is served in a tall glass, crammed full of ice cubes that crackle and sizzle when the tea is poured over them. When I say “sweet tea,” I really mean “sweet”. Some of the sweetest tea can reach 22 Brix of sugar. That means that 22 per cent of the liquid consists of dissolved sugar solids — twice what you would find in a can of Coke. Even with that teeth-numbing sugar content, the result is balanced, flavorful and refreshing.

Southerners seem to have a fascination for sugar in almost everything. For proof, there is their obsession with pecan pie and pralines that can make a dentist cringe. Coca-Cola, Pepsi, and Dr. Pepper all originated south of the Mason-Dixon line. Bourbon, the sweetest of whiskies, is the state beverage of Kentucky. In fact, the mint julep is merely a hybrid sweet tea made up of booze, simple syrup, ice and mint.

It seems that not just sugar, but ice was a key component to the evolution of sweet tea.  Tea at one time was a delicacy that was only enjoyed by the wealthy, and it was this elite class that had access to the ice shipped in to Southern cities from northern lakes prior to the invention of refrigerated icehouses. If ice was a luxury, then putting out an ice cold pitcher of tea was the pinnacle of hospitality. So sweet tea became one of the the South’s most revered traditions.

I have friends in New York City who don’t understand the southern tradition of drinking iced tea all year round. But we’ve done it for over a hundred years, since ice became available year-round.  Indeed, if you order tea in a restaurant in southeastern states, everyone gets a default tea that is syrupy, dark, strong, and icy cold. If you want want the British call a “cuppa,” you have to specify “hot tea.” Most Southerners can easily tell the difference between fresh sweet tea and the ersatz stuff made from concentrate and unless their “sugar jones” is too strong that day, chances are they will send it back.

Recently, I have observed that that magical Sweet Tea Line, seems to be creeping northward.  In my travels I have come upon establishments that offer sweet tea in such non-Southern locales as Indianapolis, Columbus and Chicago. The introduction of sweet tea by McDonald’s last year has brought out the Southern soul of countless non-believers.

When it’s time to make your own sweet tea, don’t make the mistake a restaurant in Boston did. Upon ordering a glass of sweet tea, I first got an hypnotic stare, followed by an emphatic shrug, and was brought a glass of ice, a jar of instant Nestea, 3 sugar packets and a pot of hot water.

The optimum ratio of sugar to tea varies, getting sweeter as you travel deeper into the South. I have seen recipes that call for 1 cup of sugar for every gallon of tea up to 2 cups or more for the same amount of tea. Many restaurants use a super-fine sugar that dissolves more quickly into the tea. I approve of the recent trend of restaurants serving small cruets of simple syrup along with the tea, allowing patrons to make the tea as sweet as they wish. Simple syrup is easy to make and can be used to sweeten any size of iced tea from a glass to a pitcher — and is essential to making mint juleps, as well.

In a small saucepan heat the water and sugar to a boil, stirring often.  When the sugar is completely dissolved, remove from the heat and cool to room temperature.  Place in a clean glass container and refrigerate for up to 1 week.

Another interesting way to sweeten tea is with flavored Italian syrups. Brands such as Torani, Monin or DaVinci introduce citrus, berry and tropical flavors to the iced tea base.

Some things to remember when brewing tea, to insure quality is do not store brewed tea overnight. Brew tea fresh each day. If making traditional iced tea (without a brewing machine), do not bring water to a full boil. Never use a coffee pot for tea. Any item previously used for brewing or storing coffee will contaminate tea. Also avoid placing brewed tea into the refrigerator. It will immediately cloud.

“Sun tea” — cold-brewing tea in a glass receptacle on a sunny shelf — has had a run of popularity, but I discourage the practice. Sun tea is the perfect medium for bacteria to grow. If the sun tea has a thick or syrupy appearance, it may be due to the presence of ropy bacteria called Alcaligenes viscolactis. So I would strongly advise against it.

As with anything that you make by hand, the most important thing to remember when making iced tea is quality. For the best iced tea, you’ll need the best tea.