The bourbon craze deserves some credit for tequila’s soaring popularity.

Most Baby Boomers recall bourbon as “the drunk’s drink” in the 1970s. Back then, gin was coming in, vodka was rockin’ and rum was running. Clear was king and brown was down.
What a difference a generation makes.

Tequila was similarly neglected until the early 1990s, when the good stuff began creeping north into better bars. Before that, the tequila most of America got was mixto, a low-quality blend of cheap tequila, sugary flavorings and color. No wonder the “lick, squeeze and shoot” method was invented for choking it down.

Drinking tequila straight is still the best way to understand its nuances, but not in the frat party way. Just like bourbon, it should be sipped slowly and at room temperature. (Unlike bourbon, which opens up and releases flavors and aromas with a few drops of water, tequila doesn’t benefit from dilution or the addition of ice.)

Several restaurants here are working to educate customers on the sipping approach, among them Manny & Merle, Wild Rita’s, El Camino, The Silver Dollar and Sol Aztecas. All have substantial tequila lists with 40 to 70 selections. Some also have loads of mezcal, tequila’s smoky cousin.

Junction 426 (the name to be given The Brewery in July, when its makeover concludes) will make a prominent tequila push. And five-unit Señor Iguana’s, owned by Juan Segoviano, a native of Degollado, Jalisco, Mexico, (where nearly all tequila is made) wants to create a Tequila Trail that mirrors Louisville’s Urban Bourbon Trail.

It would be easy to explain tequila’s newfound popularity as drinkers latching onto what’s hot and new, but some of it should be credited to the bourbon craze for educating the palates of straight spirits drinkers.

I’d been to a few bourbon tastings prior to sipping tequila straight. So when I tasted several aged tequilas from Casa Noble at The Blind Pig in 2011, I recognized the many flavors shared with bourbon (caramel, citrus, honey and cinnamon among them). Like bourbon, reposado and añejo tequilas (explanation below) get some barrel aging and pick up those same wood notes. In fact, about 98 percent of aged tequila spends time in used bourbon barrels, so some overlap is ensured. 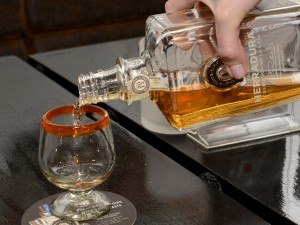 Tequila is made from the Blue Webber agave plant, a member of the lily family that looks like the top of a pineapple. An agave plant grows seven to 12 years in semi-arid climates before harvesting. At that time, its sharp, pointed leaves, which spread about five feet from the center, are cut off to reveal the egg-shaped center, called the piña. Within the piña are all the plant’s fermentable sugars.

To extract that sugar, piñas are roasted in steam-jacketed hornos (ovens) until soft and then pulverized to release the agave nectar. The nectar is mixed with water and fermented in open vessels that attract airborne yeast. After about three days, the fermented juice is distilled at least twice to achieve a liquid of about 115 proof.

Some of it will be diluted to 80 proof and bottled as blanco (or plata or silver or crystal–it’s all unaged). Other portions will be aged in wood barrels for two to 11 months and called reposado (“rested”); 12 to 23 months for añejo (“aged”) and 24 months or longer for extra añejo.

Blanco is the purest expression of distilled agave, and if you’re a tequila cocktail lover, you want those fruity and peppery accents slashing through your mixer. It’s also excellent for sipping straight, and doing so is the quickest way to learn what tequila is supposed to taste like.

Reposado and añejo typically are meant for sipping neat and at room temperature. (There’s no sin in working either into a cocktail as long as you don’t mind the cost!) Depending on its barrel time, reposado is commonly straw colored and emerges bearing roasted agave notes (think of the aroma of a cooked honey glaze) commingled with flavors of wood, vanilla, toast and cinnamon. It’s simultaneously spicy and soft.

Given the intense summer heat in Mexico, tequila ages rapidly, and añejo is a delicious example of that hastened maturity. In three years, the remaining amber liquid bears flavors of butterscotch and toffee that take a decade to emerge in bourbon. The resulting silky mouthfeel is as luxurious as flan, and the aromas of cinnamon and citrus are powerful.

There are two great ways to learn about tequila: Go to any of the bars mentioned above, ask questions and start tasting.

Or buy a bottle of blanco, reposado and añejo from the same distiller and compare at home. Pour about a half ounce of each into separate glasses, let stand 20 minutes, then sniff, taste and compare. Brown-Forman’s Herradura line is a great place to start since all three of its expressions overlap nicely.

Though great blanco can cost upwards of $50 a bottle, plenty of bargains can be had at $25. Good reposado will start in the $30 range and añejo in the $40s. Great ones can soar past $60, even $100 a bottle quickly, so choose wisely. For great selection and advice, visit the Party Mart on Rudy Lane, Westport Whiskey & Wine (Westport Village) and the Prospect Party Center on Hwy. 42.