Home FOOD The Exchange brings the Red Men’s signature chicken and dumplings back to... 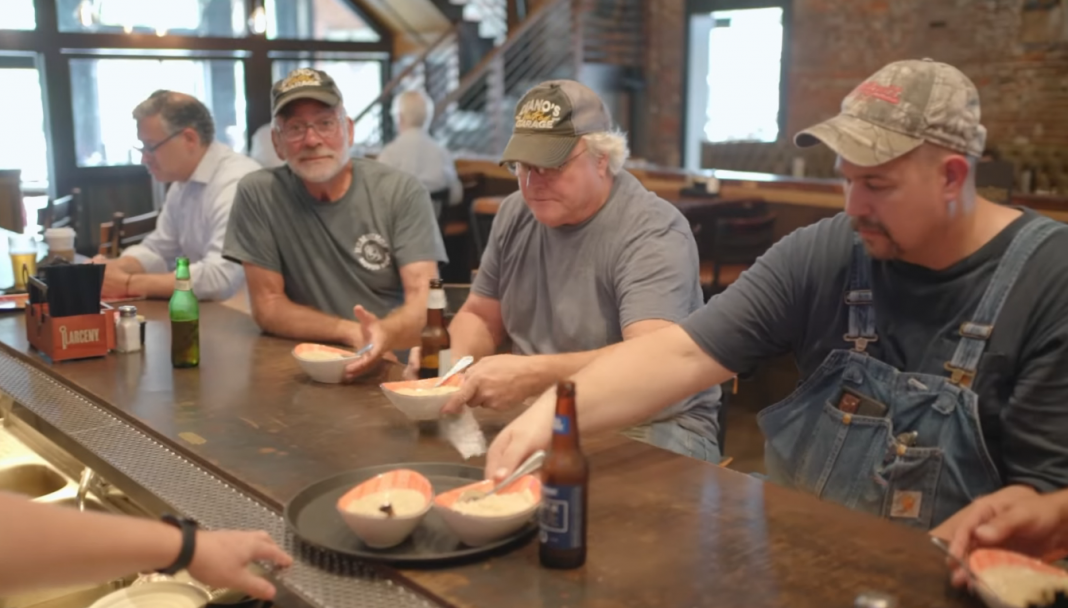 Harvest Homecoming is the tail that wags New Albany’s civic dog, and while the 52-year-old annual festival promotes numerous events throughout the city, in the mind of the public it’s all about “booth days,” when streets are closed in the epicenter of downtown and throngs descend to patronize booths occupied by a diverse array of vendors.

The past decade has seen a gradual but very real evolution in the festival, as impelled by the rejuvenation of downtown New Albany. For decades there was little in the way of commerce for Harvest Homecoming to displace during booth days. Now there are eateries, bars and retail shops, and so thinking “behind the booths” has become as important a mantra as the wares being displayed streetside.

It comes as no surprise that food is an enduring focus of booth days during Harvest Homecoming. When the event was young, the sort of roving victuals purveyor common to small fairs and celebrations was unknown. Churches, social clubs and civic organizations prepared Southern Indiana staples — doughnuts, fired mushrooms, persimmon pudding, rolled oysters, pork chops, chocolate-covered frozen bananas (!) — and put the proceeds toward their everyday programs of good works.

However as time passed the Harvest Homecoming booth days dining scene shifted away from these local grassroots cooks to the now common, for-profit professional operators. Part of it was more mouths to feed, with the original generation of once-yearly caterers lacking the means to keep pace. The old-timers aged, youth wasn’t as receptive to the notion of preparing chili for 20,000 of their closest friends, and health department regulations became more demanding.

As an example, there is New Albany’s venerable Red Men Club, founded in 1899, which has been scaling down throughout the period of downtown’s comeback. The Red Men Club is renowned locally for its annual Harvest Homecoming chicken and dumplings, and in 2019 the members were able to mount one last batch from its tiny storefront on Main Street. In 2020 the festival was cancelled, and in 2021 it appeared as if chicken and dumplings from the Red Men would go the way of long-departed culinary staples like South Side Inn and Tommy Lancaster.

Happily, cooperation has saved the day.

Readers unfamiliar with New Albany probably will be puzzled as to why any of this matters, but in the context of Harvest Homecoming it’s noteworthy. I’d suggest it’s just as important for the concept of economic localization.

No one wants to see longtime “fest food” go away, and as for those pro food trucks from Keokuk, the money they make is taken elsewhere. Harvest Homecoming began highly localized; the spending it generated recirculated inside the community. The way it can become more localized again is precisely this: The Exchange adopting the Red Men Club’s chicken and dumplings.

The analogy isn’t perfect, but New Albany’s downtown food and dining segment can help bring Harvest Homecoming’s metaphorical table full-circle, back to its roots. To me, chicken and dumplings suddenly have become highly symbolic, so much so that I probably need to put my wallet where my mouth is, and enjoy a portion.

A Popular Harvest Homecoming Dumplings Booth Is Retiring, So This Restaurant Stepped In