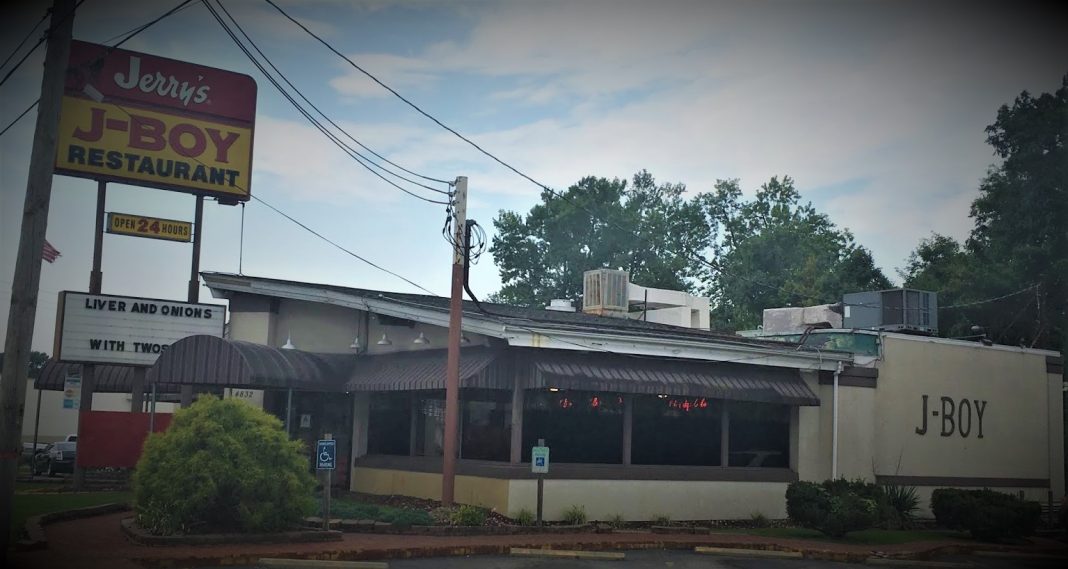 Louisville news outlets are reporting the impending demise of the city’s last Jerry’s J-Boy restaurant at 4832 Dixie Highway. The final day of business is slated for Sunday, February 16.

Jerry Lederer opened the first Jerry’s in Lexington in 1946, and franchising started in 1957. Jerrico, Inc. sold its company-owned Jerry’s restaurants in 1990, many destined to be converted into locations of Denny’s. Some Jerry’s franchisees kept going and have carried on to the present day, but their ranks are thinning.

From 2015, here is a quick Jerry’s history primer.

Jerry’s Restaurants, the eatery that dominated in the ’60s and ’70s, now dwindling, by Cheryl Truman (Kentucky.com)

It’s where your parents took you to celebrate your good report cards (J-Boy and Champ sandwiches), your come-to-Jesus moments (liver and onions), your first successful driving lesson (hot fudge cake) and maybe even your birthday (those magnificent strawberry pies).

The restaurants featured a big sign with a cheerful and chubby spokeswaiter. Parking spaces were capacious enough for the family LTD or Dodge Polara. The strawberry pies boasted berries as big as a baby’s fist and were glazed like jewels. Hot fudge cake was the treat of choice decades before anything appeared with a molten chocolate center.

In Lexington, it was a different time: Jerrico was a leading example of a homegrown business, owning or franchising 1,500 Long John Silver’s Seafood Shoppes and several smaller chains, such as Jerry’s and Lott’s roast beef.

At a blog called Broken Chains, a post from the summer of 2018 describes the author’s road trip to a Jerry’s restaurants in Paris, Kentucky and Louisville (Dixie Highway, the one now closing). It is believed the Jerry’s in Paris remains open. If so, it is the last in the state of Kentucky.

As is so often the case, the last Jerry’s franchisees are also the best ones. The holdouts in Louisville and Paris, plus a handful of others, outlasted Jerrico, and may very well outlast the Big Boy brand that they began imitating in 1946. These days they’re better at being Big Boy than either of the Big Boy chains are, and serve as monuments to Kentucky’s lesser known fast food empire.