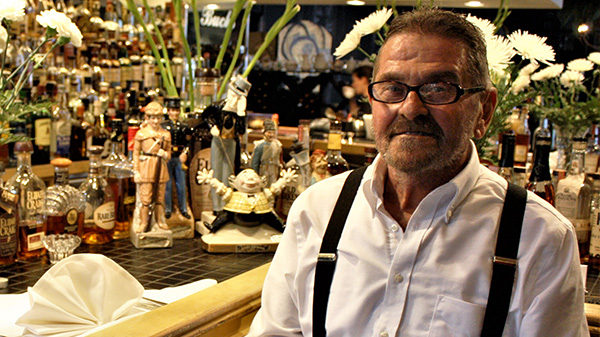 Tonight (Wednesday) from 5:00 p.m. to 9:00 p.m., Buck’s Restaurant and Bar (425 W. Ormsby) will honor the life and times of Hensel “Buck” Heath, who founded the eatery in 1992. Heath died earlier in March after a four-year struggle with cancer; he’d been given only six months to live after the original diagnosis.

In an information release, Buck’s Restaurant recalled the beginnings of the business.

Buck started the restaurant because he wanted to create an experience for guests that would never forget. He had always admired moon gardens, which are all-white flower gardens, and legend says that if you plant your garden in white, you will enjoy it day and night. So Buck painted the walls hunter green, added lots of candles, and filled the bar with white flowers. Paired with a fine continental menu, artfully mismatched china, and nightly live piano music, Buck’s Restaurant was born.

Heath sold Buck’s Restaurant in 1999 but stayed on for many years as manager. In 2017 he told Louisville Business First that those early days were a slow uphill climb for an establishment he was determined would preserve old-school norms of fine dining.

The early days of the restaurant were rough. (Heath) recalls rarely taking a paycheck for the first few years. “You have to just wait and be patient. A lot of people still today don’t know we’re here. They come in, they’re amazed they haven’t heard about us,” he said.

Tonight at Buck’s the restaurant will be closed for its regular dinner service, with guests past and present invited to toast the founder’s memory. There will be light hors d’oeuvres and a cash bar. Here’s the rest of the story, courtesy of the restaurant.

“Hensel “Buck” Heath was born in Virginia, July of 1944. From there he moved around the country, before settling in his beloved Louisville, Kentucky. During his travels, he worked at a florist shop creating beautiful arrangements, where he fancied one day creating a place with a ‘moon garden’ of white flowers.

“In his earlier days, Buck worked in some interesting places like Hugh Heffner’s yacht for a summer in the Florida Keys. There, he fell in love with the ocean. He also worked in the restaurant industry for many years, where he nurtured his passion for food and for making people happy. Over the years, he developed a love of buying and selling antiques, which gave Buck a great eye for items that were unusual, unique, and beautiful.

“So, in 1992, Buck took what he learned throughout his travels and life experiences and created Buck’s Restaurant and Bar. He filled the restaurant with antiques and white flowers and created a wonderful menu that had something for everyone.

“When his friends found out that he had been diagnosed with cancer, they asked him what was on his bucket list. Buck loved the ocean as well as the Keys and stated that he would like to visit the Keys, if just for one last time. Thanks to the many friends he had made throughout the years, they were able to grant his wish and send him to the Keys.

“Buck will be greatly missed. But his name, passions, and memory will live on through the spirit of Buck’s Restaurant and Bar.”