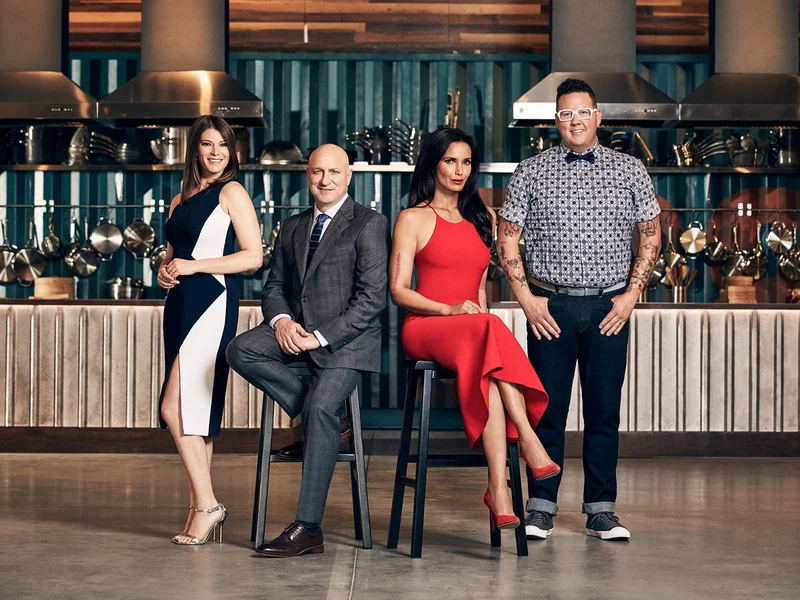 By now, it’s no secret that Bravo’s Top Chef has been filming Season 16 right here in the bluegrass state, and it seems like everyone wants to know where host Padma Lakshmi has been eating in Louisville. However, the foodie celebrity said she doesn’t actually go out that often and prefers to cook in her hotel room, because she has an 8-year-old daughter she doesn’t want living off room service and take out all the time.

But when she does go out, she said what she has noticed how happy everyone in Louisville seems to be that the series is here.

“You get the sense here that people are so sincere and warm,” she said. “They have a lot of pride, and you think ‘these people can’t all be this friendly;’ but really, they’re that friendly.”

She was first spotted at Feast BBQ  and said that she discovered “bourbon slushies are a thing.” She also visited Royals Hot Chicken, because she loves hot and spicy food.  However, she exclaimed she was really surprised to find good Sri Lankan food and such ethnic diversity in Kentucky, because she expected it to be mostly barbecue, pork and Southern comfort food.

Lakshmi divulged that she tries to eat light when filming for Top Chef, because she wants to give the chefs the full audience of her hunger — another reason for cooking with her daughter, which is done with one electric induction burner, the pots and pans that go with it, a saucepan, a frying pan, and a pasta pot. Her hotel room has just a dorm-sized fridge, so she usually guts the mini bar from it and packs it with vegetables from the Top Chef set, adding them as needed to rice and pasta dishes.

When asked what she has to have and brings with her, she said, “I always bring my own spices and a microplane – a long really fine grater, which looks almost like a metal ruler with a handle at one end. When you make food with very limited supplies, what often suffers are the aromatics or how fresh something is. So, a microplane allows you to zest an orange or lemon and lime, and it just gussies up your dish without being pretentious. It gives you that beautiful aroma of fresh grated lemon zest. I don’t know. It’s a small thing, but it can be really life changing when you are cooking out of your suitcase.”

She was 4-years-old when she began shelling peas and breaking beans with her family, and now she’s passing on a love for cooking to her own daughter.  She said that making dinner or washing dishes together is how memories are made, and that is why people love Top Chef – everyone has such an emotional connection to food.

“We wash the dishes in the sink or even the pasta pot in the bathtub sometimes,” she said. “My daughter loves to cook. She’s grown up around food; she’s grown up on the set of Top Chef. She’s sat on the director’s lap watching monitors from day one, and she has formed very sophisticated opinions of her own, because she’s heard everyone around her talk like that. She comes up with her own little recipes.”

Lakshmi’s eyes light up when talking about getting kids interested in food, and she had recommendations for others. She said the Top Chef blind taste test concept is a great game to play with kids (although, obviously, not with unpleasant things like Cayenne pepper.) She elaborated, saying that if kids are aware of the subtlety of the flavors in what they are eating, they’ll get into it.

“I always tell parents the easiest way to get kids interested in food is to be into food themselves,” she explained. “Children learn from what we do, and a child is more likely to eat something they have made because they have proprietorship over it. The one thing you can do for the health of your family is to cook at home. If you want to get a kid to eat healthy, get a kid cooking.”

Depending on their age, she said you can have them snap the end off beans, wash or cut vegetables or have them make the salad or fruit salad. There are lots of things you can do together in the kitchen for time you can spend together as a family.  Being an author of cookbooks, an herb and spice encyclopedia and a memoir, she had some recommendations for good starter cookbooks for children: “The Silver Spoon For Kids” or “Pretend Soup.”

“I think Top Chef has really changed a generation of Americans’ minds about food,” she said. “It has made such a lasting effect on the diets and philosophies of so many Americans. When I was a teenager, I didn’t know the difference between a chiffonade and julienne, and now I meet 13-year-olds on the street when I’m hailing a cab in New York who tell me they had a Quickfire Challenge at their sleepover. And it’s good, because the more a child is interested in food, the more likely they are to eat well – and that is a gift that will live with that child and keep them healthy until long after you are gone. You give a child good eating habits or a curiosity about food, and that will serve them for the rest of their lives.”