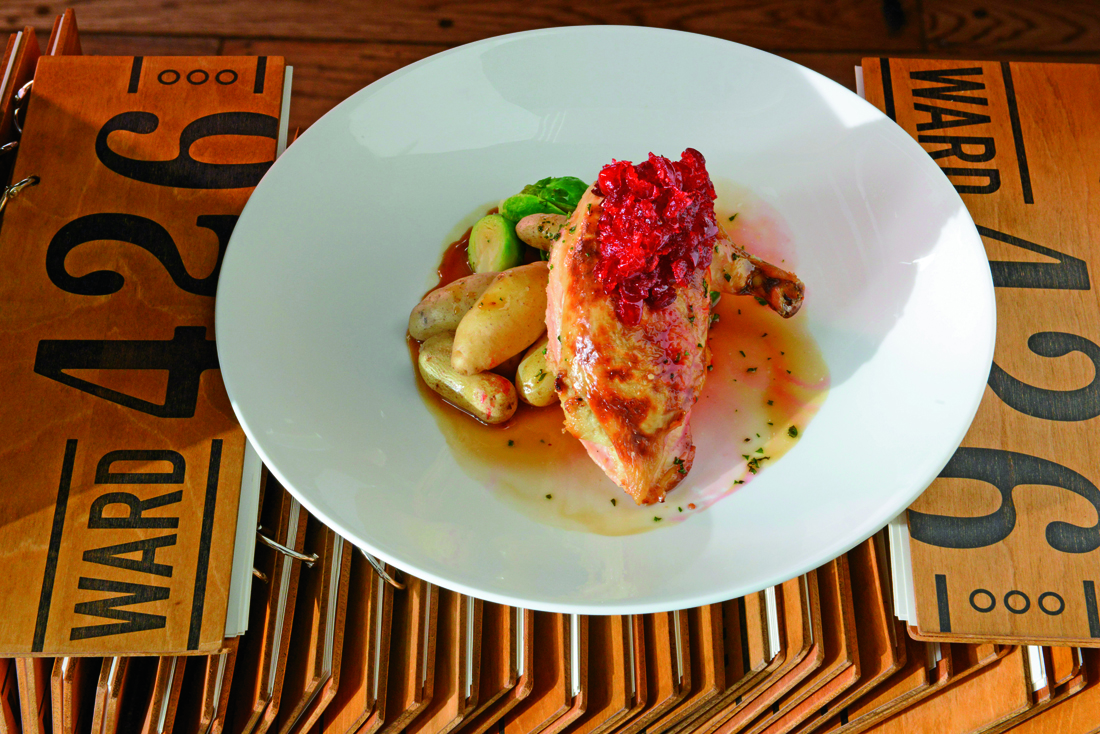 On April Fool’s Day 2014, Chefs Dean Corbett and Shawn Ward and their partners took over the kitchen of The Brewery.

To long-time followers of the two high profile chefs, it might have seemed like a prank – neither had ever shown much interest in pub grub.

Corbett, who’s been in the restaurant business for nearly 40 years, has a fine dining resumé that dates back to the glory days of Casa Grisanti and Sixth Avenue. He founded Equus twenty years ago, and in 2008 his eponymous restaurant Corbett’s — an American Place was named one of Esquire’s Best New Restaurants the following year.

As for Ward, during his 18 year tenure at Jack Fry’s, the restaurant earned several constellations of stars from area critics, and enough “best of” awards to populate a few display cases.

And The Brewery? For decades (off and on) it had been a perfectly reliable place to grab a burger and fries or a fish sandwich while watching games on the dozens of TV screens that adorned the walls.

By early summer, Dean Corbett realized something wasn’t right. “We got two months in,” he recalled, “and I thought, this is ridiculous. People were walking in the door looking at Shawn and me and saying, ‘Tater Tots? Really?’”

One night, Corbett asked Ward to step outside for a chat. “I said to him, ‘Let’s just give this up. Why are we trying to be something we’re not? Why not just do your food, the food you’ve always wanted to do, and use the gifts you have? Let’s quit with the tater tots and the French Dips, and let’s do what the good Lord put you on the planet to do, which is to cook great food.’ Shawn was so happy, I thought he was going to cry.”

Ward remembers that night. “I felt like a huge weight had been lifted from my shoulders,” he says. “I told him if he could make that happen, it would be the greatest thing in the world.

The next day, Corbett rang his bank and the designers at Bittners and started the process that would eventually lead to the opening of Ward 426 — a name that celebrates Chef Ward’s cuisine, the restaurant’s historic location at 426 Baxter Avenue and the traditional happy hour time slot, 4 to 6.

Ward, Corbett, and their partner and General Manager Nirmesh Agrawal, opened Ward 426 at the end of November, and the word “makeover” doesn’t come close to expressing what they’ve accomplished.

The only physical features that seem unchanged are the lead glass windows behind the bar and the bar itself, a dark, gleaming length of wood that was fashioned over a century ago. According to Dave McNamara, Assistant General Manager, the bar is a marvel of 19th century ingenuity. At one end there’s a ladder that was originally used to lift blocks of ice into high chambers where the ice would thaw, dripping chilled water on the bottles below.

Where once The Brewery seemed to encompass a sprawling, ill-defined space, there are now carefully delineated zones that promote a feeling of intimacy and warmth.

Ron Wolz, Vice President for Interior Design at Bittners, said in a phone interview that the design goal was to create a space that was contemporary and relevant, but still respectful of the old architecture. He segmented the space into what became four zones. Besides the bar, there’s a comfortable lounge area facing Baxter Avenue — a perfect spot for sharing a cocktail, or watching a televised event. In the elevated front dining room, carpet was replaced by crisp black and white mosaic tiles that look as if they might have been installed a hundred years ago. Bright white trim works perfectly with the warm lighting and emphatically frames the dark allure of the bar. A rear dining room offers a quieter ambiance (and is well-suited to private and corporate events).

Furnishings include comfortable seating and handsome butcher block tables that give the room some heft. And onyx lighting fixtures give off an amber glow that one might mistake for copper or bronze.

Ward and Corbett are thrilled with the result. Says Corbett, “I wanted something that had the classic feel of the Berghoff in Chicago. We basically just gave them our thoughts, and they ran with it.”

Ward echoes that: “Bittners has been great — and they keep making changes. They come in to dine, look around, see something they want to improve, and the next day somebody shows up with something new. One day I got here and a couple of fellows were waiting with a tree…”

Wolz says, “Well, I approach it the way I would my own home or a client’s home. Ideas evolve as a space gets used, so it’s still a bit of a work in progress. And they’re planning to add patio space this spring, so we have more things planned.

The overall effect is extraordinary. But Wolz says it’s calibrated not to distract a diner from Chef Ward’s food – not that any but the most radical design would likely accomplish that.

It’s safe to say that at Jack Fry’s, Ward had cooked himself into a corner. Over the years, so many of his dishes had developed a devout following that it was hard for him to make changes. “Every time I took something off the menu and replaced it with something new, we’d get a half-dozen letters questioning our intelligence,” he said with a chuckle.

At Ward 426, he’s building on the work he did at Jack Fry’s, but he feels free to explore new ideas. Menus will change seasonally (a late winter menu is slated for early February, and March will see the introduction of an early spring menu).

On a tour of the bustling, newly remodeled kitchen which looks like a laboratory (“He’s got some cool toys in there that I don’t even know how to use,” commented Corbett), staff were dissecting locally harvested red peppers and delicate heads of Bibb lettuce, working with smoked beets, and Carolina Gold rice. Ward’s menu includes dishes that he introduced at Jack Fry’s – including the shrimp and grits he picked up during an early career stint in Charleston, South Carolina, made here with Weisenberger Mill Grits. And there is a burger – though its accoutrements, which include Morbier cheese, caramelized onions, cornichons, and arugula might have seemed out of place at The Brewery.

But Ward offers plenty of options — The Chicken & The Egg features a richly flavored boneless chicken wing confit, a soft-boiled egg, and an intense garlic puree. An order of gnocchi features duck Worcestershire gastrique, black garlic, and a wintry touch of turnips. Roasted chicken is served with a chestnut mousse and a cranberry marmalade. A Creekstone filet is embellished with Bourguignon vegetables, pork belly, and herb butter. But every little thing is hand-made and hand-crafted, right down to the biscuits and the delightfully pungent pickled vegetables that accompany the charcuterie — especially some crunchy, zesty bread-and-butter pickles that mix a sweet start with a burning, fiery finish. There are five and seven course tasting menus, for both omnivores and vegetarians.

Service is impressive as well. When Ward, Corbett, and Agrawal took over The Brewery, they invited existing staff to stay on. Many of them did, and while The Brewery was morphing into Ward 426, they retrained at Corbett’s two other restaurants.

“After all my years in the business,” said Corbett, I can say that this place is running at a higher efficiency than any restaurant that I’ve ever been involved with – in fact, I’d put us up against all but maybe five percent of the restaurants in the city, and that’s extraordinary for a place that’s only been open for this amount of time. We took the staff to Corbett’s and Equus over the holidays, and I’d say that people who started out at, say, a 50% finesse level, came back at 85%, and have just gotten better.We’re only two months in, and it’s amazing how smoothy we’re running,. And that’s thanks to the leadership of Shawn, Nirmesh, Dave, and Zach [Sous Chef Zach Young]. And by the way, Zach and our Pastry Chef Robbi Santos are part of a group of young Louisville chefs who’ll be featured at the James Beard House later this spring.

It’s also remarkable how well Corbett and Ward complement one another. Their relationship is as warm and fraternal as it could be. Manager Dave McNamara observed that the two men had developed a mutual admiration for one another over years of working side-by-side in charity events. Corbett founded the Kosair Charities Bourbon and Bowties benefit, McNamara said, “and it features a who’s who of chefs in this town, including folks like Anthony Lamas, Josh Moore, Edward Lee, and John Plymale. It’s one of the cool things about this town – and about Dean and Shawn – that the chefs here really like one another and like working together. It’s a tight knit community, and we’ve had already had a lot of chefs come by to visit.” (In fact, Chef Nick Sullivan, of 610 Magnolia, was at a nearby table one night when I dined at Ward 426.)

Talking about the partnership, Corbett said, “The cuisine here is really Shawn’s – he’s introduced me to a lot of things I wasn’t familiar with, including that dinosaur kale, which makes an amazing salad. But we have some of the same peculiarities and standards. If something comes out of the kitchen that isn’t just right, it’s like a race between us to say something first – we’re on the same frame. The other night, a salad came out with a bruised piece of lettuce. It’s a salad that conceptually has fried oysters and a dressing, but the focal point is really this great Bibb lettuce from Grateful Greens here in town. We both saw it at the same time, and had the kitchen redo it, because as a guest the first thing your eyes are going to be drawn to is not the garnish, but that beautiful lettuce. It’s amazing how often we have exactly the same response to something.”

As for Ward, he sums up the relationship with Zen-like precision: “He’s my rock,” he says.