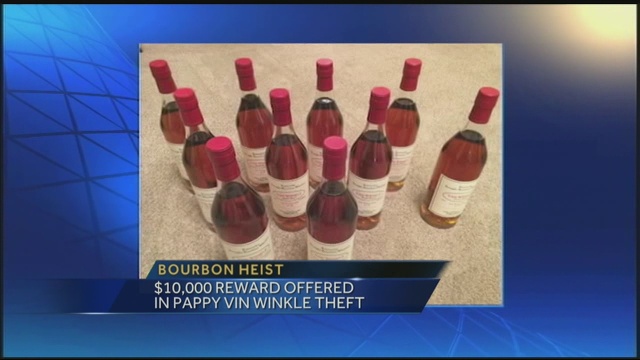 The mystery of what happened to all that Pappy Van Winkle whiskey–95 bottles of 20-year-old Pappy Van Winkle, and nine bottles of 13-year-old rye reserve–, stolen from Buffalo Trace Distillery in Frankfort last October remains unsolved, despite the $10,000 reward for information leading to the arrest of the thieves.

Apparently that much-ballyhooed crime was the inspiration for a rare tasting event  Tuesday, April 8, 7-9 p.m. at Bourbons Bistro, 2255 Frankfort Ave.  Tom Fischer, founder of BourbonBlog.com, the first and only online TV show and content site dedicated to bourbon, will join with Bourbons Bistro owner Jason Brauner to lead a tasting of five rare, limited release and small batch bourbon and rye whiskies.

A range of passed appetizers from Bourbons Bistro’s kitchen will accompany the tasting of these whiskies:

An Export Only bourbon so rare, they can’t divulge the secret.

This whiskey was placed in older bourbon barrels, aged at sea and shipped around the world. Stopping at 5 different continents, the whiskey crossed the equator four times.