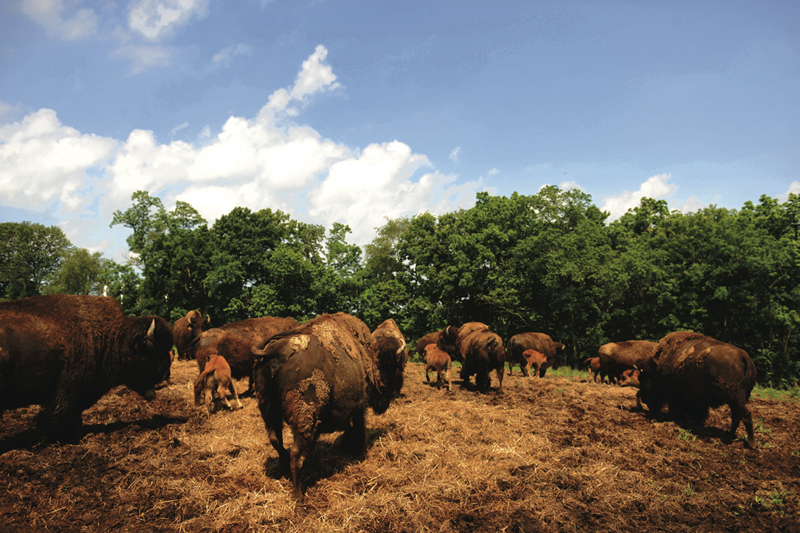 From ancient forests and savannahs of Kentucky comes a native food that helps define our local cuisine as naturally delicious.

There was a blip on the culinary radar a decade or so ago, when chefs became enamored of exotic meats, particularly ostrich, which was purported to be lean and crammed with protein. It tasted OK, but it was somewhat removed from its terroir, as it were. Even if the birds were raised in Southern Indiana, it didn’t feel like they belonged on our menus.

Buffalo — bison — is different. Back in the day bison meat, too, seemed exotic, but only because the animals had hovered near extinction in the mid 1800s and were slow to come back, to be observed like zoo animals roaming in national parks. Centuries before, herds estimated at millions literally cleared the way for Daniel Boone to make his way through Kentucky and north to Ohio. Buffalo “traces” were wide, worn paths made by the animals as they moved through fields and woods toward the salt licks of Northern Kentucky, named Big Bone and Blue Licks today. Unlike ostrich, bison meat is downright indigenous.

Today, grazing on grass as they did for centuries (only now behind fences in places like Oldham County), bison produce a meat that is lean and high in Omega-3 fatty acids. High levels of Omega-3s are the reason health specialists suggest we eat lots of fatty fish (salmon and mackerel, for instance). Grass fed animals of all kinds produce more Omega-3s (chickens on grass produce eggs with higher Omega-3 content). Eating bison (and grass-fed beef) is how we can stay healthy even if we can’t or don’t eat seafood.

Nutrition has a little something to do with why Bea Chamberlain has eliminated beef from her menu at El Mundo and fills all her tacos with ground bison, to the tune of 50 pounds a week or so. She uses bison because, “it’s a leaner, more sustainable, local product,” she says, “and also because it’s delicious.”

Genetics has something to do with the great taste. But the way the animals are raised has something to do with it. A bison gains weight slowly on grass, and won’t reach processing weight until he’s two years old. It’s against American Bison Society protocol to feed the animals subtherapeutic antibiotics, steroids or hormones to make bison gain weight more quickly. In theory, if a bison became ill, you’d be allowed to shoot it with antibiotics, but according to Dave Carter with the ABS, you really don’t want to be doing that. Bison aren’t domesticated, and the vet’s not holding them down to give them a shot.

In contrast, supermarket beef comes from animals that are shipped to a feed lot at 650 pounds or so and force-fed a high-corn diet with plenty of growth stimulants that rush them to slaughter weight in 14 months or so. Harvesting young animals yields bigger profits, but less flavor.

The extra months of grazing and living mean extra flavor in bison meat, and an extra dollar or two on your bison burger.

At Wiltshire on Market, restaurant owner Susan Hershberg says bison is featured often: bison osso buco with ricotta dumplings and green garlic gremolata, bison Bolognese with tenderloin and mushroom confit and homemade pappardelle noodles, bison flank steak pho and bison meatballs. And lots of hangar steak. “When we serve hangar steak it sells two to one over everything else,” says Hershberg.

“It’s always tender,” she adds. “it’s like butter. Even the flank steak, wich is a cut you always have to be careful with in beef, in bison we never have an issue with it.”

From ancient forests and savannahs of Kentucky comes a native food that helps define our local cuisine as naturally delicious.