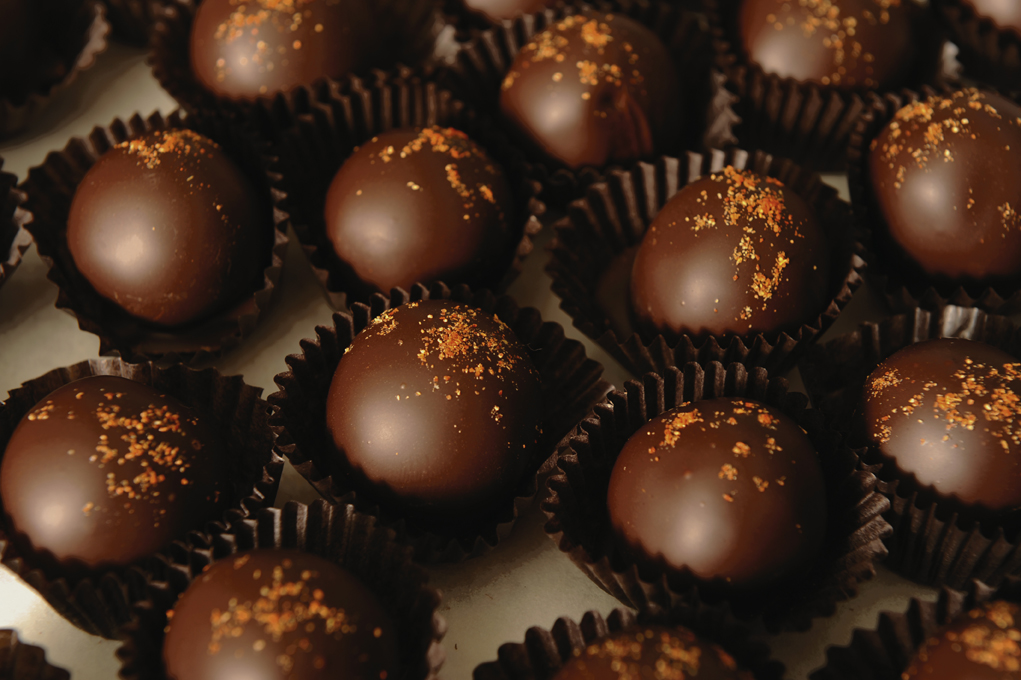 The little girl who learned to cook in her grandmother’s New Mexican kitchen has grown up to bring a sophisticated option to the candy connoisseurs of Louisville Metro.

A few years ago, 29 year-old Erika Chavez-Graziano was working on her economics degree in Binghamton, New York and making truffles for “friends, family, pot lucks . . .” When she moved to Louisville for the sake of a relationship, she thought she might be able to earn a living making truffles. Soon after, she opened Cellar Door Chocolates.

“I always cooked, I love to bake,” says Chavez-Graziano, “(truffles were) the next challenge.”

Maybe. But a short course in truffle-making will leave the average cook humbled and often a little frustrated. The glossy, brittle coating that enrobes Chavez-Graziano’s truffles is the result of more science and skill than the creativity and practice normally associated with good cooks, and even good bakers.

That chocolate coating — Chavez-Graziano uses premium-brand E. Guittard — must be heated to a precise temperature (115 degrees for dark chocolate, 110 for milk and white), and removed immediately from heat, at which time smaller pieces of chocolate are stirred in, both to cool the chocolate and to help it remember its crystal formation. As the chocolate cools to no lower than 84 degrees, that crystalline structure begins to set up again. The chocolate is then warmed over hot water to 85 to 88 degrees, allowing her to dip them.

This melting-cooling-warming process is called “tempering” and home cooks usually avoid it by a variety of methods, all of which interfere with the final enjoyment of the candy. Sometimes, cooks use a product called “chocolate coating” that is sold in the baking section of supermarkets, in which silky cocoa butter is replaced by a more stable fat that leaves a waxy feel on the palate and muddies the pure chocolate flavor. In old home recipes, paraffin was sometimes added to real chocolate to stabilize it.

Other home truffle makers dip their centers in chocolate that has been simply melted, as it will harden at room temperature. The hardened coating is deceptive, however: it will melt as soon as your 98.6 degree fingers grab it on either side. Some cooks forgo the chocolate coating completely, rolling their “centers” in a coating of nuts, coconut or cocoa. These alternative coatings avoid the chocolaty finger problem, but require refrigerated storage, which is a problem, because cold chocolate inhibits flavor perception.

Perfectly tempered chocolate can be stored on the counter; it will retain its brittle exterior while the center remains creamy, even runny. But though the chocolate is firm enough to snap when you bite it, the cocoa butter begins to melt immediately in your mouth, creating a luxurious coating with the most possible flavor. You get the full impact of flavor and texture.
These are the kinds of truffles mastered by Chavez-Graziano, beautifully decorated with swirls of chocolate, chocolate nibs, sprinkles of cayenne pepper or Madras curry powder, or nearly powdered nut pieces, among many of her toppings.

“I constantly have to do something new,” says Chavez-Graziano. A slow summer season nudged her to an ambitious marketing campaign. She decided to riff off the “Julie/Julia” project, during which New York resident Julie Powell cooked in one year all the recipes in “Mastering the Art of French Cooking” by Julia Child.

Chavez-Graziano started the 365 Days of Chocolate project in September and now makes a different chocolate for every day of the week, inspired by her favorite flavors in life.

But not just any beer. Local beers made with specific characteristics, like New Albanian Brewing Co.’s Hoptimist, or Browning’s She Devil. Each day in September brought a different beer flavor. Super-hoppy beers like the Hoptimist might flavor a buttercream filling; peanut butter is mixed with nut brown ale and dark chocolate for a center, then enrobed in milk chocolate.

Not all the projects are truffles. There are barks-one flavored with olive oil and sea salt – and candy bars and giandujas (equal parts chocolate and nut paste), and the afore-mentioned buttercreams.

Other flavoring themes included savories, junk food and wine. Savory flavors included pork tenderloin, beet, avocado (a customer favorite), and duck. Wines were chosen based on recommendations from owners of her favorite wine stores. Junk food truffle flavors included Milky Way (with homemade marshmallow cream) and, her personal favorite, Butterfinger. And each month, 10 percent of sales from the project candies goes to a different local charity.

Chavez-Graziano insists, “I’m not trying to cook, I’m trying to crunch numbers”- that is, to make her living. And to do that, she sold more than 6,000 truffles during the Christmas season. That number doesn’t include the extras, like barks and peanut butter cups. “This is my life, this is my livelihood.”

Still, reinforcement comes in forms other than money. Creativity counts for something. “When I made that Butterfinger, it showed me what I could do,” she says.

Each chocolate in the 365 project can be found and bought by the piece at Quills coffee shop (Chavez-Graziano’s kitchen is in back), 930 Baxter Avenue, and is available only on the day it is made.

You can find her more conventional truffles (green chili coconut?) and other candies at Dundee Candy Shop, 2112 Bardstown Road and Taste of Kentucky in the Aegon Center at 4th and Market streets downtown.

At the end of the 365 Days of Chocolate, Chavez-Graziano hopes to have completed two books. One is a children’s book, “for girls, based on finance and making good things,” she says. “I want to introduce them into the world of checks and balances and how to make money, how to figure out your cost of goods.”

The other book is a record of what she’s done for the 365 Days, containing recipes, instructions on truffle making, and information distilled from her mistakes. It will be more cookbook than blog narrative. “You’ll pick it up with the idea that you’ll make chocolate,” she says.