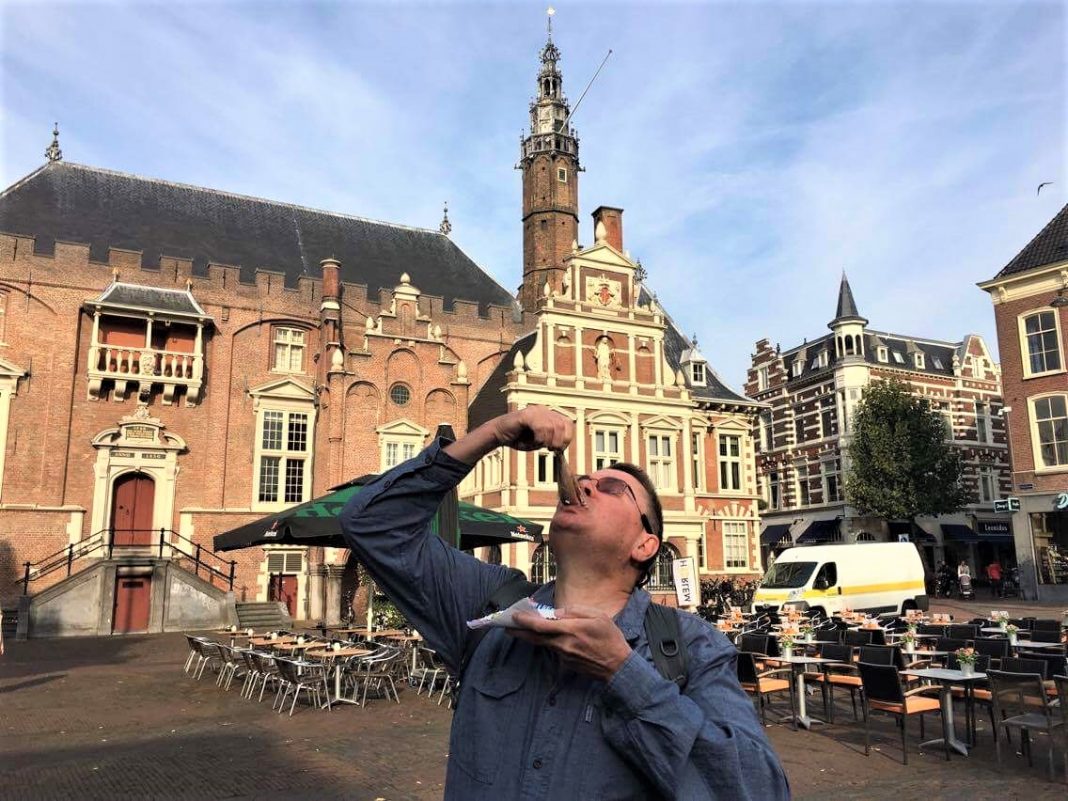 “A kind word is no substitute for a piece of herring or a bag of oats.”
— Sholom Aleichem

When it comes to social media, other people go berserk about postings on politics and religion, but the ones that really annoy me go something like this:

Q: Hey guys, what’s the weirdest restaurant experience you ever had in a foreign country?

A: Well, one time we were in a McDonald’s in Casablanca, and …

You what? You went all the way to Morocco and ate in a McDonald’s? Why on earth would a person do something like that?

I mean, it’s bad enough to brag about your Chick-fil-A Platinum Rewards card here in America, but why waste your time patronizing generic chains when you’re have the good fortune to travel overseas in the first place?

(gurgling sounds are emitted in reply)

Wait — what was that? You’re asking me if I think the Chick Fil A in Beijing serves Peking Duck Bites?

Sigh. We can only hope, seeing as they would make for another “gotta try” Instagram moment, and I realize how crucial those are to you. If you’ll excuse me, I may need to remove myself from the conversation; if I’m lucky enough to last another two decades before paying my tab for the final time, you can rest assured I’ll be spending as little as possible on foods like these from places like those.

It reminds me of a visit decades ago to Salzburg, Austria. I was chatting with a forlorn and utterly terrified Texan who was depressed to the point of a nervous breakdown because he couldn’t find any beer to drink in this lovely and cultured mountain city.

Pitying the disoriented Lone Star specimen, I tried to talk him off the ledge: cheer up, mate, because it’s your lucky day as a beer lover. You’re in Salzburg, and Germany’s just across those mountains; meanwhile the brilliant Augustiner beer garden lies a few blocks away. They have sausages, and the beer there? Heavenly.

He looked at me like I was a mutant space alien.

“But there’s no Miller Lite. It’s my favorite beer. These Austrian beers are awful. It just isn’t the same.”

That’s because IT’S BETTER! WHO COMES TO EUROPE TO DRINK AMERICAN LIGHT BEER?

Well then, I suppose there’s only one recourse. Tuck tail and flee back to Dallas, rent an efficiency apartment upstairs at Hooters and take your meals at Arby’s before repairing to Applebee’s for a Lite-cap.

Now that I’ve gotten all that off my chest, is it time yet for breakfast?

I prefer fish for breakfast — but not just any fish.

Among the rotating selections from the pantry at dawn’s early light are pungent smoked kippers with crackers; piquant pickled herring on buttered rye bread; and lox with the requisite bagel, cream cheese and just a light sprinkling of capers.

On special occasions, just for garnish, there’ll be a garlic-stuffed olive.

Happily there are repercussions to such culinary preferences. From nowhere, impatient cats find me as I’m walking down alleyways, and they make an eager, impromptu parade. As an unapologetic “cat person,” I congratulate my feline friends for their exquisite taste.

Even better, some mornings I get in a hurry, forget to brush my teeth, and inadvertently breathe on a prim, proper, crisply attired banker — and he promptly wilts, as though beaned on the noggin by a stray aesthetic revelation. If it doesn’t render the suit entirely unconscious, I’ll breathe on him a second time.

That usually does it.

Let’s be clear. I like deceased marine life in the morning. Captain Crunch isn’t even close. Pop Tarts need not apply. However eggs will do, generally when pickled.

Obviously, these dining strategies are best complemented by stiff, aromatic black coffee, such as that produced through the saving grace of our home Saeco espresso maker. As for side orders and balance amid the oil, vinegar and brine, there’s properly bitter orange marmalade on toast and the occasional serving of Greek-style yogurt with fruit. Both balance quite well.

Indeed, pungency settles the humors. Until the pallid likes of Bob Evans and Cracker Barrel grasp the eternal wisdom of treats like these, it’s hard for me to take them seriously as contenders for my early morning dollars.

May these franchised monuments to white bread, Velveeta and decaf never, ever besmirch the shining shores of Scandinavia, where so many years ago I learned to eat breakfast the right way.

It was July, 1985 in Oslo, Norway. Thanks to an exchange rate highly favorable to Americans, Scandinavia briefly became almost affordable, and when I stepped off the overnight train from Copenhagen to explore Oslo’s main station in search of a bite to eat, the handy restaurant with its all-you-can-eat breakfast buffet actually was reasonably priced.

(As a side note that for budget travelers, buffets always mean two or perhaps even three meals, not just one. A clean freezer bag can be artfully stuffed full of meat and cheese when no one is looking and reserved for duty later in the day.)

While industriously filling my plate (and bag) I saw three ceramic pots positioned on a narrow shelf. Innocently imagining they were filled with jams or jellies, I scooped out a spoonful of … rectangular silvery-gray piquant vinegary fish parts.

Inadvertently, I had been introduced to pickled herring, a delicacy that hitherto had eluded me. Quickly I realized it was time to put up or shut up, because what possible purpose would have been served by traveling all the way from SoIN to Norway and then being too timid to taste the difference between the two?

Right there in Oslo, with every corn-fed Indiana olfactory receptor sounding a red alert — “BEWARE, Midwesterner: Ocean products not fully processed into paste to make Filet O’Fish sandwiches … do not compute … WARNING!” — I piled the pickled herring onto a flat, dense and nutty slice of rye bread.

The funky aroma tickled my proboscis. I hadn’t eaten pickled herring before, not even once, but it was love at first chew.

Later that week in Bergen, Norway, I treated myself to a culinary splurge. For three hours at lunchtime, a renowned local eatery ran an all-you-can eat seafood buffet for the equivalent of $15. Bearing in mind that my daily budget for lodging, meals and alcohol was $25, this was a budget-buster.

The fact that it has lingered in my memory three decades later attests to the correctness of the decision to abandon fiscal rectitude.

The buffet served as a Nawbany rube’s introduction to smoked salmon, something quite rare in the rural, corn-fed Indiana of my youth. In 1985, I had no way of knowing the same-but-different confluences between Norwegian smoked salmon and Jewish lox (the latter cultural norms being as uncommon as Vikings in Baptist-laced Hoosierland), or the meticulous culinary strategies for preparing such treats, which are every bit as traditional, proud and locally varied as American barbecue methodology.

I could say only that I liked it, a lot, along with mussels, oysters, flounder and all the rest of the bounty.

The summer of 1985 was an introduction to all things European. I became enamored of the continent, and always will be. Food in general captivated me, especially those items and recipes we didn’t commonly experience at home at the time, like moussaka (from Greece), North African cuisine (in Paris) and even Nutella (rare in Louisville back then).

Specifically, engaging in strange, subversive encounters with un-American fish became a thread running through most subsequent journeys, from pie, mash, eel and liquor (gravy) in London in 2013, to the snack tray at my Northern German friend Suzanne’s wedding on the Baltic in 1996, which also included eel, this time smoked. The black scabbard fish with indigenous bananas on the island of Madeira is worthy of note, too.

But my single proudest moment came when I enjoyed the distinction of being the oddball foreigner who introduced my Danish pals to the grandeur of the Faergekro restaurant at Nyhavn (“new” harbor) in their own hometown of Copenhagen.

The daily herring buffet was and remains a highlight of western civilization. At least ten varieties of pickled herring (with sour cream, curry and Madeira sauce, among others) are offered, along with dense dark bread, butter, and garnishes like raw egg, onion and caper berry. Whole smoked herrings are carved from the bone and replenished.

Beer is available, as well as Akvavit (Scandinavian schnapps), along with the wonderful northern custom of providing house-made infusions of herbs and spices for flavoring the firewater and washing down the tasty pickled and smoked morsels.

You can spend whole days in a joint like this, and one time in 1989, I did just that, starting at Faergekro for lunch and finally arriving back at my temporary Danish doorstep in a taxi well past midnight, pea soup fog choking the street as well as the inner recesses of my cranium, fully tempted to join W.C. Fields in returning to the eatery the next day and asking the manager:

(Insert whatever the words are for “yes, you did” in Denmark.)

The pure enjoyment of succulent fishies and creatively flavored Akvavit surely is preferable to losing the money, and for all I know, it may have been a wonderful evening.