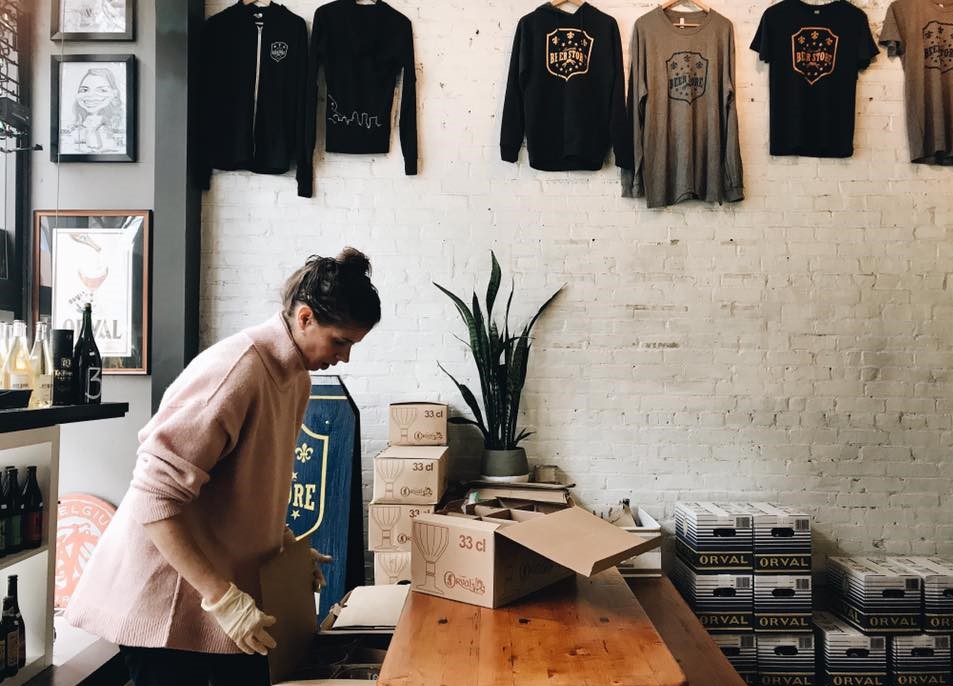 “To understand why this myth persists,” explains Bryson, “it helps to realize that the beer business has two main parts when it comes to putting drinks in your hands. There’s the ‘on-premise’ side where you buy a drink and consume it at the bar, restaurant, sports arena, brewery taproom, and so on. And then there’s the ‘off-premise’ side, where you buy cans or bottles for home consumption, including liquor stores, groceries, convenience stores, and pharmacies.”

For the most part, those off-premise beer vendors have remained open during the pandemic. Concurrently, on-premise establishments have been subject to closures and various capacity restrictions. Right, wrong or indifferent, these are the businesses not selling anywhere near as much beer as before.

Bryson finds that many brewers and beer industry suppliers, while willing to express optimism over the long term, are bluntly realistic about the months to come, short-term.

Sierra Nevada’s Jeff White is also forecasting a very different landscape. “It will certainly be quite some time—well into next year—before the vast majority of the population is comfortable returning to old routines,” he said. “Unfortunately, the retail landscape—bars, restaurants and many brewpubs and small breweries—will not be able to survive the loss of business for that long, and so the options will unfortunately diminish as a result.”

It is against this backdrop that the Louisville Beer Store announced its impending October 31 closure last week in a mildly ambiguous post at Facebook.

It’s a lovely day to enjoy a beer on our patio while it still exists in our current location. Louisville Beer Store will be closing our doors in NuLu at the end of this month. October 31st will be our last day of business. Things in the World are too uncertain to speculate a future for the store at this point in time, but we would still hope to make something happen and we’ll be sure to keep you posted as time goes on. A massive thanks to everyone who has made the store possible over the last 11 years. We love you all!

“We would still hope to make something happen” sounds to me like a cryptic clue, so we’ll keep all eyes and ears open while congratulating Lori Beck and Tyler Trotter (who also own the local icons Holy Grale and the gralehaus) for a decade’s hospitality and innovation at LBS.

In Great Britain, the pub that you visit most regularly is your “local.” It’s a third space, after home and work, and the place where everybody knows your name. We can and will wax rhapsodic about our locals, and yet they remain small businesses, subject to the remorseless vicissitudes of capitalism, with finite life spans just like our own (excepting Sean’s Bar in Athlone, Ireland, which claims to have been serving since 900 AD).

When our locals come to an end, we mourn as customers. So do their owners, employees and families. They usually mourn even harder. Recently the Syracuse Post-Standard reported the demise of GAEL Brewing Company, in itself not particularly noteworthy for those residing outside of the area, except for the headline: “Not Covid. Not Cuomo. Owner of closed Finger Lakes brewery blames himself.”

It’s one of the most remarkable statements I’ve read in recent years, and fortunately I thought to copy these words before the brewery’s Facebook page disappeared. The honesty of the owner’s self-scrutiny is brutal; it’s not an easy read. Folks closer to the situation say he’s being too hard on himself, and this might well be the case.

And yet, speaking from personal experience five years ago, this is the gut-wrenching way it really feels. Now more than ever, please support your locals.

“GAEL Brewing Company is announcing the closing of the brewery effective
immediately.

“This decision is a difficult one to make but based on an exhaustive analysis, the numbers did not add up. A significant part of my life is gone. I am sure that there are many people who will be critical of what I did. I tried the best I could. Unfortunately, that is the nature of life these days, to be critical, to feel superior especially from those who have never risked anything in life and who have never met me.

“The brewery did not make money at any time during its existence and I did not take one dollar of pay during the time that we were open. The failure of the business rests entirely on me. It was not NY State, Governor Cuomo, COVID-19 or any other excuse. The failure is because of me solely. The market has spoken loudly and they rejected our brand. I have failed. It is that simple. People/businesses fail every day. Hoping and wishing is not a business strategy and it does not cover health insurance premiums and other expenses. Someone has to be sacrificed on the capitalistic altar of creative destruction. Sometimes in the epic struggle of rolling the rock up the hill, it falls back down the hill and runs you over.

“I regret that I had to make this decision but it is based on declining foot traffic within the tasting room and lack of wholesale sales. I was hoping to fill a void being a dedicated brewery focused on quality on the northern edge of Seneca Lake but the anticipated growth did not materialize. The COVID-19 crisis did not cause this; it was just the last strike of the hammer on the nail to close the coffin.

“I made many catastrophic strategic business mistakes especially early on that contributed to this decision. I was overly optimistic for the need for our craft beer in the area over time. I tried to increase our brand recognition within the area but didn’t accomplish what I set out to do. I couldn’t invest in the constant measures necessary to draw people to the brewery. When the brewery did have entertainment the additional foot traffic did not materialize.

“I tried to emphasize the family aspect of the Irish-American heritage with our business. In hindsight, I should have been edgier to draw attention to ourselves as some have done, but that is not in my personality.

“I truly appreciate everyone who came through our doors and supported us in the time that we were open and hope that you had a great time here. The memories of us for you may fade over time but for me I will remember everyone who visited.

“I will not be able to speak to most of you personally who see and respond to this post. Our paths will probably not cross again. No one knows what the future will hold for each of us; however I just want to say a sincere thank you and goodbye. I will now just fade away and disappear.

“Please be safe and alive during this time. That is what is important.”