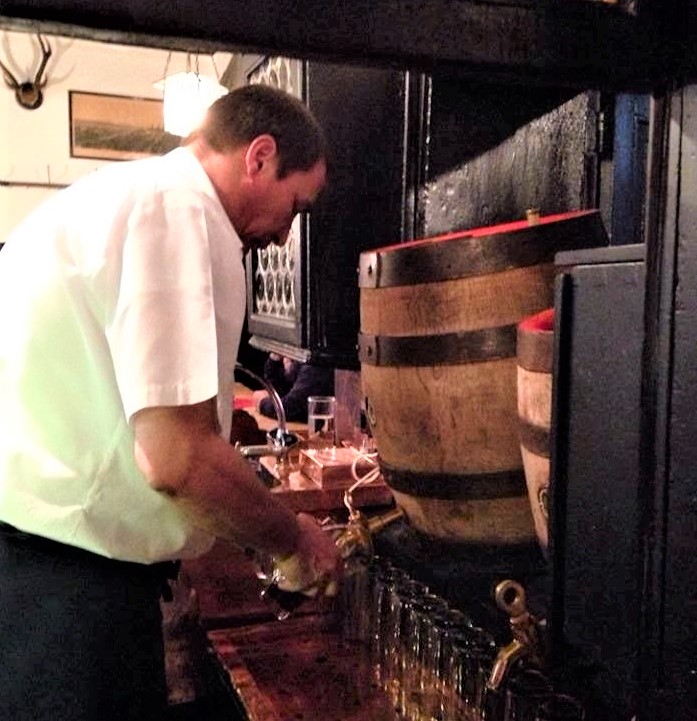 Preserving tradition means to keep the fire burning, not to conserve the ashes.
– German proverb

Smoked beer (or “Rauchbier” in German) has been an obsession of mine since the very first time I tasted it more than 30 years ago. Smokiness in beer might strike one as misplaced, given the technical perfection (read: flavorlessness) of modern mass-market lager beers, and yet as brewing traditions go, smoke character has a long and noble pedigree.

During the malting process, the precise details of which far exceed my generalized aim today, barley is soaked, then dried. Drying can come from the use of indirect heat, or by spreading wet barley on the floor, or utilizing the most elemental way of all: designing a way to build a fire below the wet grain, and allowing the rising heat to do the trick.

The smoke duly permeates the malt and becomes a flavor component, something perhaps more obvious to peaty Scotch whisky aficionados than beer drinkers. It works the same, either way.

These days many craft brewers include smoked malt in their arsenals, usually for seasonal or specialty beers. Just last week I had a pint of Abzug at New Albanian Brewing Company, which first appeared in New Albany in 2009 after then-brewer Jared Williamson was researching Central European lager styles.

In Vienna in the late 1800s, Abzug was the session-strength “younger” brother of Märzen and Vienna, with less lagering time and a lower alcohol content – similar in ultimate purpose to what we know as Kentucky Common from the same period in Louisville. Current brewer Ben Minton added a dollop of smoked malt to his Abzug variation, and it’s both noticeable and appreciated.

Conversely, in the 1980s smoked beer was exceedingly rare in America, although in larger metropolitan areas it was possible to find a German one called Kaiserdom Rauchbier, from the pioneering beer importer Merchant du Vin. When the beer writer Michael “Beer Hunter” Jackson commented about smoked beer in his books, at least we had something to taste as an example.

Kaiserdom is an actual brewery in Bamberg, but as I learned in 1995 while touring it, the smoked lager has always been largely an export-only product. That strange March day neither the brewery nor its tasting room had any of its own Rauchbier available for consumption. Still, this atypical weirdness aside, Kaiserdom’s version was an adequate introduction to the genre when others couldn’t be found.

Spezial’s gentler tawny  smoked lager should not be missed by any beer lover visiting Bamberg. When exported sporadically in the past, it didn’t seem to travel as well. Consumed fresh, it is amazing. In Bamberg, both Spezial and Schlenkerla maintain wonderful taverns and cook delicious rustic Bavarian cuisine. The city outside these classic institutions is absolutely lovely, too, though best navigated after laying a proper foundation of beer and pork at either establishment.

Schlenkerla is king of the hill, crucial to a city built atop several of them. It began coming to our neck of the woods in the late 1990s. I’d already fallen in love with Bamberg prior to being in the enviable position of selling Schlenkerla at my workplace, and via the importer B. United, the latter led in turn to my making the acquaintance of Matthias Trum, the 6th-generation owner of the family brewing business.

One of the top-tier bucket-list and Holy Grail goals of my life in the beer business has been to have Aecht Schlenkerla Rauchbier Märzen on tap within walking or biking distance of my home. For quite some time at my former business, we managed it. Maybe 2021 will be the year to make it happen again in downtown New Albany, wholesaler willing.

The following two highly informative links make me thirsty. Follow them, read, and learn more about Schlenkerla’s unique place in the beer cosmos.

THE MAKING OF A CLASSIC: SCHLENKERLA MÄRZEN (Beervana blog)

No one may have studied the process at a highly technical level outside the walls of Schenkerla, but the family has perfected the process over the century and a half of kilning over fire. “We often get questions from American craft brewers and American homebrewers—how do you do this, and how do you do that? And we always have to decline and say, ‘sorry, that’s a family secret that we have been working on for centuries.’”

Given the overwhelming ‘bacon in a glass’ flavour associated with Schlenkerla’s beers, you could be forgiven that the primary goal of their maltings is to impart as much smoke flavour as possible into the malt, and final beer. However, Matthias assures that the focus is in remaining true to the historical methods of producing quality malt, the smoke being a welcome byproduct of that storied process.