Home DRINK Beer Hip Hops: When pairing beer with food, the trick is to transcend... 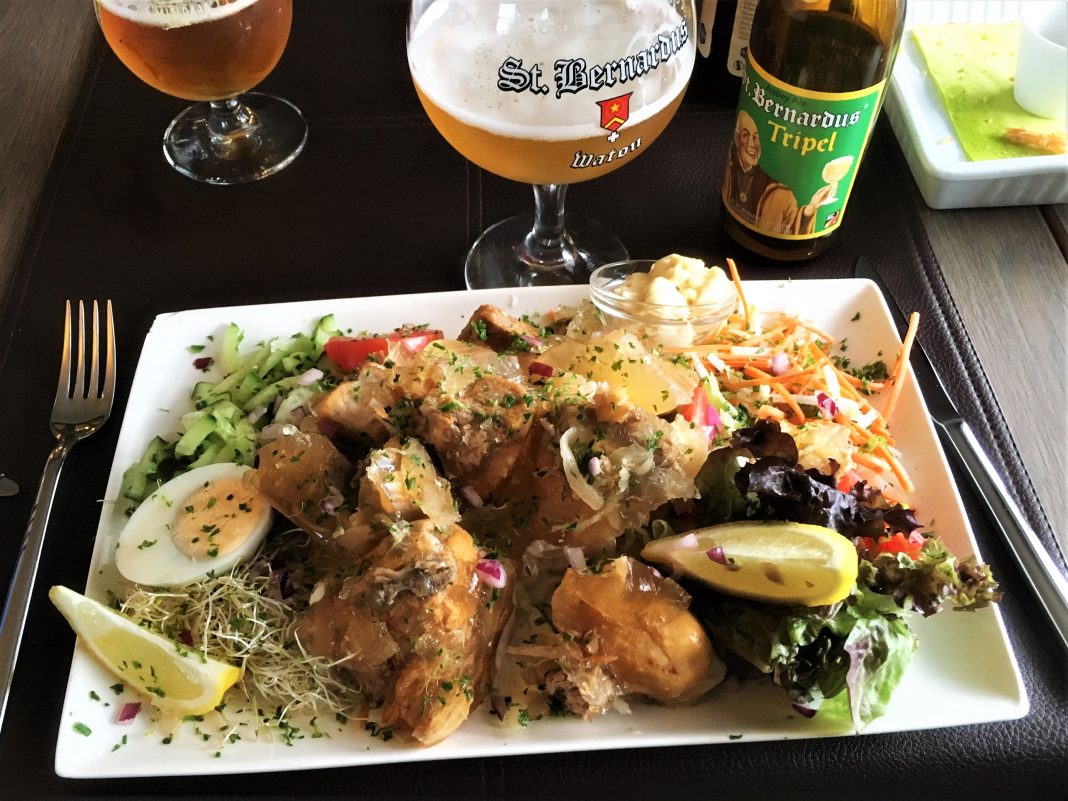 Every major industrialized nation has A BEER (you can’t be a Real Country unless you have A BEER and an airline—it helps if you have some kind of a football team, or some nuclear weapons, but at the very least you need A BEER).
— Frank Zappa

With apologies to the late Mr. Z, allow me to advance a modest proposal with regard to a nation’s beer, particularly as it pairs with the same nation’s food.

Just because a nation has a beer, it isn’t necessarily the best beer for pairing with a nation’s food.

Here as always, the devil dwells in the depths of semantics (or in Zappa’s case, the risqué lyrics), and yes, I am well aware that the notion of “pairing” beer is a first-world consideration, one not particularly relevant to the lives of billions, and furthermore, using the term “first-world” implies a hierarchical view of humanity, and deserves a long, thoughtful discussion.

Similarly, the concept of ethnicity in the context of immigration, cultural appropriation and a host of other issues pertaining to identity is a minefield, and I’d prefer to avoid slogging across it in my size-16 heavy boots.

These disclaimers aside, the food and drink reality we face right here on the ground in America is that some (maybe even “most”) restaurants offer diners a bit of everything, while broadly differentiating only by price point (fast food versus white tablecloth), while others specialize in certain types of cuisine, a simple definition of which would be “a style or method of cooking, especially as characteristic of a particular country, region, or establishment.”

I’d argue that “steakhouse” is a recognized and replicable cuisine, to be rated by its adherents in much the same way as judges at the Olympics score gymnastics performances, whether the beef purveyor in question is a purely pedestrian Texas Roadhouse or one of the true high-dollar indie throwbacks.

Insofar as nations are concerned, random examples of international cuisine, as prepared in restaurants in metropolitan Louisville, include Mexican, Nigerian, Italian, Chinese, Scandinavian, Japanese, Caribbean, Thai, Bosnian and Indian, and this list is by no means exhaustive.

To be sure, regional variations within nations are real, and also more complicated. Rightly or wrongly, many of us have only a vague notion of what these culinary regions entail within geopolitical contexts. Maybe we are aware that Cantonese and Sichuan cooking differs, or that Sicilians and Florentines have distinct ideas about food. After that, it’s tough.

But at a basic level, most of us grasp that the notion of cuisine derives from human beings living in a particular place, making use of foodstuffs at their disposal, and developing a way of cooking and eating in their own places and times.

And, when people move around the planet, they take their culinary ideas with them, hence Irish pubs boasting Guinness, fish & chips and colcannon, located in most major cities from Siberia to Argentina.

Returning to the sort of beer we’d expect to see in these international table settings, perhaps the most common example guaranteed to resonate with casual American beer drinkers are Mexican brands at Mexican eateries: Modelo Especial, Corona, Tecate, and so on.

But there are others.

Now, here’s the rub. I’ve just listed eight distinct international cuisines, in some instances featuring wildly diverse ingredients, accompanied by 13 “national” beers, every last one of them a variant of the golden lager style originally brewed two centuries ago in Pilsen, in the Czech Republic.

Ironically there isn’t a Czech restaurant within two hundred miles (probably more) of Louisville. Perhaps in Chicago; otherwise, a plane ticket may be required.

I’m tempted to say that the Czech Republic (or for that matter, Germany) constitutes an exception, because Pilsner Urquell, Budvar and Staropramen go quite nicely with pork, sauerkraut and dumplings, except that the only reason I say this is because, until recently, there’d have been no chance to pair Czech cuisine with any other style of beer.

These days American Pale Ale, Imperial Stout and English Mild presumably are being brewed by rebellious nanobrewery start-ups in Prague, and there are other stylistic options. They might taste worse with Segedínský guláš, or as good, or maybe even better.

As we stumble forward, I’ll posit three primary ways to look at the idea of pairing beer with food.

Just Wash It Down Theory: The majority of national beers are golden lagers, hence the shorthand “international lagers,” which are light and bubbly, and pair well enough with everything imaginable because they don’t taste much like anything specific.

Pairing by Association Theory: Even if all the ingredients on one’s plate were grown, harvested, processed and prepared in America, the fact that they comprise (for instance) a Mexican culinary ethos means the beer simply must come from Mexico, too, even if the beer’s own family tree originated not in Mexico, but Europe.

Pairing by Comparison Theory: Each in turn, the flavor characteristics of food and beer can be weighed according to certain criteria, in an effort to see which styles of beer complement certain elements of cuisine, taking into account all beer styles and cuisines.

The latter constitutes the road less traveled, although at least one luminary in the brewing community has been signposting the pathway for more than two decades.

“Do you bake bread at home? Try to make a loaf of Wonder Bread. Just try. Believe me, you can’t do it. No home baker can. You’d need a laboratory and millions of dollars of equipment to achieve such a remarkably bland creation. American mass-market beer is exactly the same thing. It’s undead.”
― Garrett Oliver, The Brewmaster’s Table: Discovering the Pleasures of Real Beer with Real Food

Garrett Oliver is a brewer and writer best known for his long tenure at Brooklyn Brewing. In his genuinely groundbreaking book from 2003, he goes to great lengths to explain that once the respective characteristics of beer and dish are determined and understood, as with a strong, dark Trappist-style ale and Capriole Farms’ Wabash Cannonball goat cheese, there is greater satisfaction to be had by enjoying them together, rather than separately.

In a long-ago feature at Food & Wine, Oliver elaborated.

I generally think about the same thing I do with wine: whether I want to compliment or contrast flavors. The nice thing is that beer has a better chance of doing both. Say I have a seared piece of meat or a piece of pancetta, I can contrast it with some carbonation, bitterness or fruitiness. But at the same time, I also have a set of flavors, which I call flavor hooks—the beer flavors that link up specifically with the flavors in the food. So in a dubbel, for example, I have caramel flavors that can grip onto the caramel flavors in the meat.

Oliver concludes with the knockout punch, one sure to be contested by my friends in the ranks of the sommeliers (although as the great beer writer Michael Jackson once noted, most of them drink beer after work) .

The fact of the matter is, beer is far more diverse than wine. And the reason for that is pretty simple: Brewing is much more like cooking than winemaking. Wine is just one ingredient: grapes. That’s it. To a pairing it brings acid, fruit and perhaps some tannin. Beer may be spiced, sour, smoked; it can taste like bananas or flowers or coffee beans or chocolate or chiles. It can contrast or compliment pretty much any food, because our range of flavor is close to infinite.

To cite a random example of international cuisine, in his book Oliver offered this brief cheat sheet for pairing beer with Indian food.

I’d slide a pleasant English-style ESB into the slot with IPA, but no matter. We needn’t dive into this as deeply as Oliver did.

At the very least, bottles of American Pale Ale, German-style Hefeweizen and Porter; toss in a standard strength Hazy IPA, a Saison or Belgian Tripel, and a Gose, and we’re getting somewhere. It’d be $300 wholesale for six cases of beer, and assuming solid margins, the task of choosing isn’t commensurate with nuclear physics.

To reiterate: “Just because a nation has a beer, it isn’t necessarily the best beer for pairing with a nation’s food.”

It’s why of all the restaurants that have come and gone in Louisville during my adult life, the one I miss the most is Maido Essential Japanese, which provided the likes of La Chouffe and Two Hearted Ale to accompany Izakaya nibbles and sushi. Of course Maido’s successor, Dragon King’s Daughter, follows this template too.

Am I being unfair to the ubiquitous lager theory?

Are there noteworthy local examples of international cuisine not beholden to yawn-inducing global golden lager?

Let me know. My aim is to expand possibilities, and I’m eager to shine the spotlight where it is most deserved.