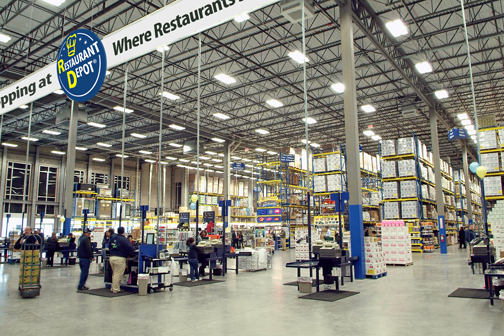 As hard as it might be to believe, a career spent writing humor columns did not prepare me for the rigors of restaurant ownership. Shocking, I know, but true. Yet restaurant ownership remains the dream of many a deluded soul out there in the world. So as the owner of Gracious Bakery + Café and its subsidiaries here in New Orleans, I would like to share with such interested parties my keen insights gleaned from the past three years of proprietorship. Learn from my mistakes so that you in turn do not make them. Or better yet, open up a traveling cat circus. That would be the safer bet.

LESSON 1: When purchasing gigantic ovens, don’t get upsold on the Prison Package.

When the installers uncrated and began assembling our LBC Double Rotating Rack Oven with the help of a forklift, we ogled its size. The baking chamber could easily accommodate an NFL defensive lineman with room for a long snapper or two. When our pastry chef Summer, who likes to keep ownership on their toes by envisioning otherwise unthinkable workplace injury scenarios, asked the salesman if there was a way to turn it off from the inside in the event someone, like say a drag queen (see lesson 4), accidentally got trapped inside, the salesman laconically replied, “Not with this trim line. For that, you need the prison package.” Really. Apparently this is a problem in lockdown, and good old American manufacturing has engineered a solution as an upsell.

Its slogan is “Where Restaurants Shop,” but I like to call ours Soulcrusher. Have you ever been to one? If not, just imagine if Sam’s Club had a baby with the DMV and that should give you an idea of the overall feel. The one we use in New Orleans is a particularly striking example of such, nestled snugly between a halfway house for recovering crank addicts and an abandoned railway switchyard. Inside you will find aisles clogged with abandoned pallets of hand sinks (see sink Shadow Conspiracy, in lesson 3) and defrosting chicken niblets. Here, employees call customers “Old Ladies” and make a cruel sport of side-swiping them with electric pallet jacks. And despite their inability to match the price on the item with the price at the register, the mathematicians at The Depot have nevertheless mastered an extraordinarily subtle and complex store policy of being out of exactly the one thing you really need every time you go regardless of what it is. At least ours has feral chickens living in the parking lot by a pile of broken carts. They are pretty amusing, although I’ve been chased by the rooster a few times.

LESSON 3: Be sure to budget enough buildout money for sinks and sink-related expenses.

Ah, code. Where would we be without health departments to keep us safe? Wherever that is, we’d have a whole lot more money in our pockets. Doing a buildout? Get ready to get yo’ sink on. I have a 700-square-foot kitchen in my first restaurant and within it you will find approximately 8 billion sinks. OK, so maybe seven, but still. Way more sinks than logic would dictate. Code requires us, among other head-scratchers, to have a sink next to a sink. True, one might be for washing dishes and the other for washing hands, but the reality is that everyone just uses the main one and the auxiliary one is essentially a $1,500 fully plumbed cup holder for Big Gulp Mountain Dews. Don’t go down the sink rabbit hole. You don’t want to know how far it goes. G7 Nations don’t rule the planet. A hand sink Shadow Conspiracy does. Does Oliver Stone know about this?

LESSON 4: Drag queens may be fabulous but they make for sketchy bakers.

Club life and a bread baker’s hours, like gluten-free and a sense of humor, don’t mix. We learned this the hard way with Ginger Snapp (name changed to protect his anonymity). Ginger started strong but he faded down the stretch, and he also wore more makeup than the rest of the entire company combined. I had the feeling he came straight from the club to work his morning shift, which started about 3:30 AM. True, he had terrific bread-shaping skills, but he came up short in other ways. For example, commercial appliance repairs. When the high-tensile canvas belt on our dough sheeter began to fray, he suggested we might be able to fix it with fashion tape. Really. Toward the end of his employment a mysterious Audi would often be seen idling out front, glow sticks a-wavin’ through the tint. This would typically herald a hangover the next day or, worse, a no-show. After one too many late nights we had to let him go, though we considered retiring his frock to hang from the Sveba Dahlen Deck Oven as at this point he had kind of become an unofficial mascot.

Oh boy, where to start? On the one hand I feel like if I complain I’ll be discovered in a shallow digital grave with my star rating slashed, but on the other if I don’t, I’m being complicit in a business model that basically boils down to extortion. Few things are as deeply rooted in the rage ganglia of small business owners as opinions of Yelp. But after holding out for three years I’ve finally started paying for advertising and now, at least, the sales reps have stopped calling me 20 times a day and I can again answer phone calls from San Francisco instead of cringing in fear. That’s probably worth the $400 a month. But it is hard to defend a system that basically arms an army of chimpanzee-troll hybrids with metaphorical M4 grenade launchers spraying idiocy and vitriol willy-nilly. Favorite complaint – “I love their food but I gave them one star because they are too far from my house.” What does one say to that? Seriously.

Excited to open your own place? You should be. I’ve had so much turnover lately I have seriously started to research if drones are capable of making wholesale deliveries. They aren’t. Oh, well. Gotta go. It’s time to make the donuts.  F&D

Hip Hops: Welcome my son, welcome to The Machine (at TEN20 Craft Brewery)