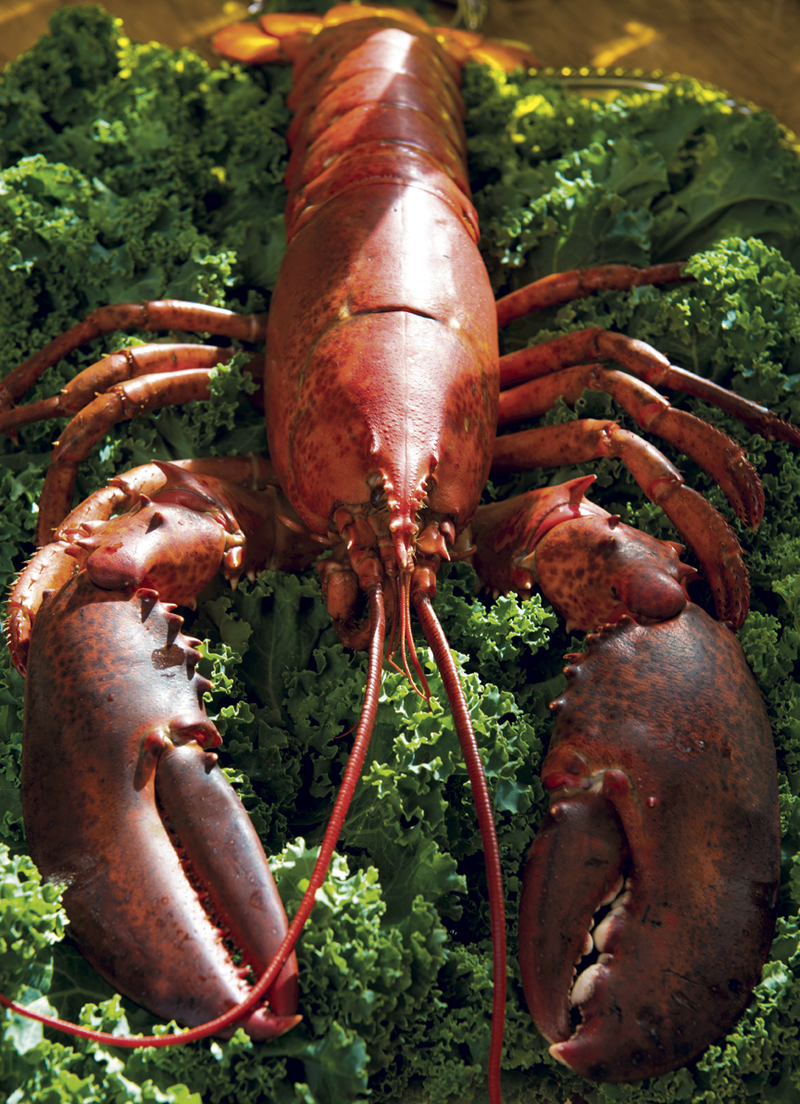 Ask anyone who has seen Woody Allen’s “Annie Hall” knows, cooking whole live lobsters can be intimidating. But we’ve taken the fear out of the process by providing easy steps to properly cook lobsters, for the reward is well worth the effort.

Not only is lobster delicious eaten whole, its rich meat is luxurious in a variety of dishes including appetizers, soups, entrees and sides as well. We’ve included several of our favorite lobster recipes to enjoy as a full lobster-feast meal or as an accompaniment to other dishes.

For a wine pairing, we suggest a chardonnay to compliment the flavor and not over-power the lobster. Sonoma-Cutrer Sonoma Coast Chardonnay fits that bill perfectly. For dessert, do as they do in the northeast: enjoy fresh blackberries with a dollop of whipped cream — the perfect ending to a decadent lobster filled dinner.

Having the ability to buy top quality lobster at a very good price is an amazing benefit of living in Louisville. Clearwater Seafood is truly a hidden gem in our city. Be sure to see Greg Gapsis’s “From the Earth” feature on them to learn how Louisville became the major trans-shipment point for East Coast lobsters.

To get the skinny on how to manage cooking one of those squirming green arthropods, we went to the source — Clearwater Seafood, whose Produce Road operation keeps them happily squirming until they are ready for our tables. Here is their advice on how to easily cook a whole lobster.

Add in 4 tablespoons of sea salt per ½ gallon of water — that’s a half-cup for a 2-pounder. 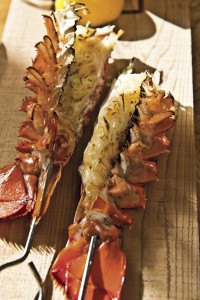 For the lobster tails:

For the Champagne dipping sauce:

Heat the grill to medium-high heat. Cut the lobster tails in half lengthwise. Remove the meat from the tail shell and rub the inside of each shell with 1 tablespoon of the butter. Replace the meat and skewer each tail to keep the meat in place and to stop it from curling while cooking. Place the tail, shell side down, on the grill and cook without flipping the tail, until the meat is opaque, about 8 – 12 minutes.

Dipping sauce: Pour the champagne into a medium-size saucepan. Add the parsley, thyme, bay leaf and shallots. Cook over medium heat until just 1 cup of the liquid remains, about 25 minutes.
Strain the liquid and discard the herbs. Slowly whisk in the butter, one tablespoon at a time, over low heat. When all the butter has been incorporated, season with salt and pepper to taste. Keep the mixture warm while grilling the lobsters then divide into individual bowls for dipping.

For the lobster broth:

For the lobster meat:

In a large pot, over medium heat, combine the butter and olive oil. Add the garlic, carrots, celery, onions, salt, pepper and sauté for 10 minutes. Deglaze the pan with the bourbon. Add the chardonnay and let reduce for 1 – 2 minutes. Add the vegetable stock, tomato paste, peppercorns, lobster carcasses, bay leaves, parsley and thyme. Add enough water to just cover the shells. Turn the heat down to medium-low and simmer, partially covered, for 1 hour.

Roux: In a small saucepan, over medium heat, add the butter and flour and cook, whisking continuously until amber in color, 6 – 7 minutes. Remove from heat.

Bisque: Using a very fine strainer, strain the lobster broth into a medium pot. Add the roux and heavy cream and stir to combine. Let reduce on medium-low heat until thick, another 15 – 20 minutes.

Lobster meat: In a medium size pan, over medium-high heat, melt the butter. Add the lobster meat and sauté until heated through, 1 to 2 minutes.

To serve: Divide the lobster meat among 6 bowls, placing it in the center. Ladle the bisque around the meat and top with a claw and chives.

Note: Avalon is gone now, but the memory of its rich lobster mac ‘n’ cheese lingers. F&D liked the dish so much that we featured it back in the Spring 2006 issue (available online).

Bring one gallon of water to a boil with ample salt to make the water “taste like the sea,” as Italians say. Boil the pasta until it’s al dente, taking care not to overcook as it will cook further in the dish.

Drain and rinse with cool water to stop it cooking; drizzle with a little vegetable oil and toss, to keep the pasta from sticking together.

Melt the butter in a two-quart saucepan over medium heat, and whisk in the flour. Cook for 1 minute, then slowly pour in the milk while stirring constantly with a wire whisk. Stir vigorously to ensure that there are no lumps. Bring to a simmer, then, once the milk has thickened somewhat, remove the pan from heat and add the heavy cream and Cheddar cheese. Mix well. Season to taste with salt, pepper and cayenne.

Toss the cooked pasta, cheese sauce and lobster meat together and place in a heavy oven-proof casserole dish. Sprinkle with the grated Parmesan cheese and bake uncovered at 350 degrees for 15 or 20 minutes, until the dish is bubbly and browning on top.

Remove from the oven, drizzle with the truffle oil, and sprinkle with chopped chives as garnish.