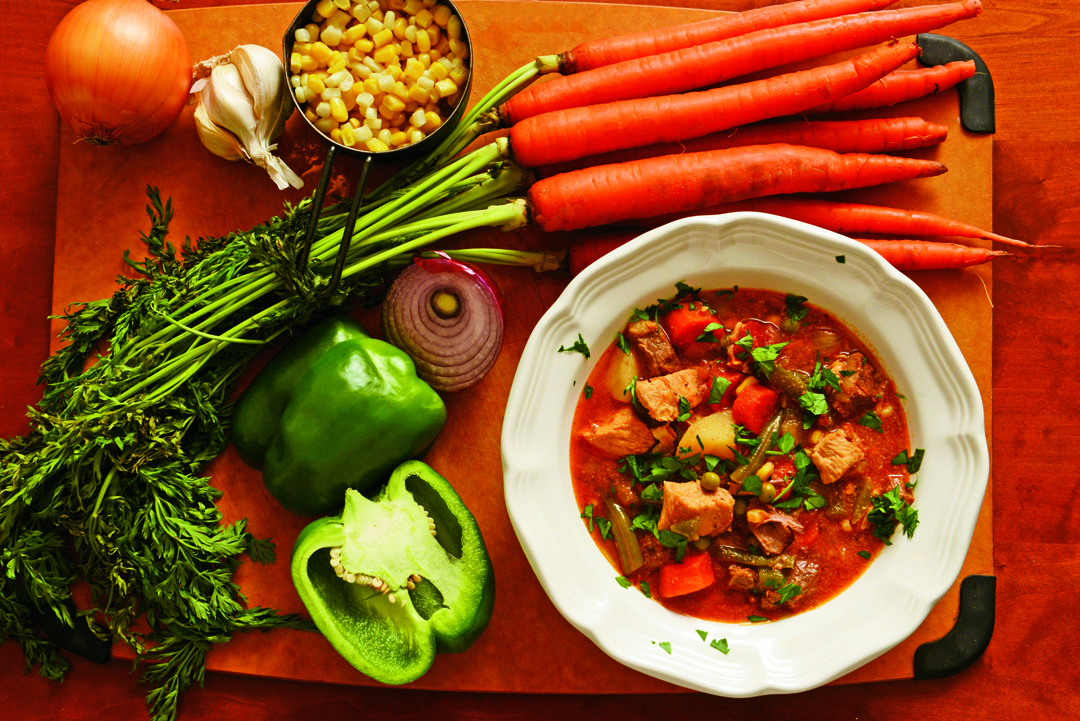 Many Derby visitors hope to dine on regional delights like country ham on beaten biscuits, Benedictine sandwiches, beef tenderloin served with Henry Bain’s sauce (if someone offers you a jar as a gift, take it with thanks and be sure to get the story behind it), and, of course, Derby Pie. If they are fortunate enough to attend an informal brunch out in the countryside, they might even be treated to burgoo.

Burgoo is among those regional dishes as legendary as cassoulet, cioppino, Brunswick and Mulligatawny stews, slumgullion and gumbo. These hearty, single-bowl meals date back centuries in some cases, varying with each generation and relocation and spurring heated debates about “authentic” recipes, even though the provenance of all such “recipes” is clear: All of these dishes surely began as communal efforts, composed of whatever might be available in local larders.

So it is with burgoo, Kentucky’s contribution to this socio-culinary tradition. It likely began as a small-game stew centered on the locally abundant squirrel. Many a rabbit also met its fate here, as did irascible old hens long past their egg-laying prime. We raise our share of lamb and hogs here, so finding a slab of mutton or a pork shoulder in burgoo is no accident. Whatever the meat, it’s typically mixed with chopped onions and corn, tomatoes and beans and water, and cooked slowly. Like the stone soup of folklore, soon you have something tasty and filling to eat.

One story traces burgoo’s beginning to the Civil War, when local rebel hero John Hunt Morgan’s men brought back a conglomeration of foraged stuff, some clearly edible (potatoes and corn, hens, a goose, a small pig) and others of questionable digestibility (several blackbirds and a large crow). Apparently clever with such field fare, Morgan’s French cook managed to stew the haul into a hearty meal for the men, who surely were ravenous from fighting and marauding.
Other food histories clearly call the dish Kentucky burgoo, saying that it was served at large picnics and political rallies out in the state. Similar dishes are served all over the Ohio Valley, however, and even Utica, Ill., has an annual Burgoo Festival.

But only Kentucky has a Burgoo King. That was the name of the 1932 Kentucky Derby winner, a product of the Bluegrass Idle Hour Stock Farm named in honor of J.T. Looney, a Lexington chef and caterer famed for his burgoo recipes. Burgoo King was a lightly regarded contender who went off at 6-1 odds but made a strong stretch run to win by three lengths. He made it interesting in the Preakness, winning only by a head, but a foot injury denied him a Triple Crown chance in the Belmont.

Burgoo King and the Lexington chef are both gone now, but the tradition of burgoo celebrations lives on. Unless there’s a hunter in your family, you’d have to go pretty far out into the state to find burgoo made with squirrel, rabbit or other game nowadays, but it is a common enough restaurant dish, almost always made with chicken and pork, sometimes with beef, and, in the Owensboro area, with mutton. The vegetables can vary, with some argument over whether cabbage belongs at all, but almost all recipes call for tomatoes and corn and usually some sort of bean.

How long one should cook burgoo is another issue of debate.Former Courier-Journal food editor (and my predecessor at Food & Dining) Sarah Fritschner describes burgoo in one of her Derby cookbooks as “cooked and stirred so long that the soup is nearly as homogenous as gravy, with bits of corn or lima bean appearing once in a while and the meat… reduced to shreds.” But burgoo can be chunky, too. Chacun à son gout, as Morgan’s French chef would say. Here are two approaches to burgoo to suit your own tastes.

They have big parties out in the state for occasions like the Derby. This original recipe called for a 4-gallon stewpot, a larger kitchen implement than most city folks keep on hand. I reduced proportions to make it more reasonable in a contemporary kitchen, but you still need a pot that will hold at least 2 gallons. If you have frozen, dressed squirrel or rabbit or a shank of venison, add a pound or so with the other meats; otherwise, store-bought meats will do the trick.

Put all the meat in a large, deep pot and add 1 gallon water. Turn the heat to high, bring to a boil, then reduce to low and simmer gently, skimming any foam off the top, until the meat falls from the bones – about 2 hours. Strain the broth and chill meat and broth separately.

When the meat is cool enough to handle, separate it from the bone (much of this may have already happened); remove and discard skin, cartilage, fat and other pieces you want out of your soup. When the broth is cold, skim fat from the top and discard. Combine meat and broth and return to a boil over high heat. Add remaining ingredients (except parsley) as you prepare them, stirring often. When the mixture boils again, reduce heat and simmer 4 to 6 hours, adding water when necessary and stirring often.

The finished meat should become thin shreds and the vegetables should be insignificant — at the very least, the potatoes should disintegrate — with fragments of a few still visible. The mixture will be almost like a thick meat gravy. Add chopped parsley just before serving. Burgoo improves on standing a day or two refrigerated, and freezes well. Serves at least 15.

This recipe makes for a fairly conservative “urban” style of burgoo, using only beef and chicken and cooked to a still-chunky texture rather than the gravy-like rendition above.

Add oil to large, heavy pot over medium heat. Season the beef with salt and pepper. When the oil is hot, sear the meat in batches for a couple of minutes on all sides. Add the onions, garlic cloves and pepper. Cover with water. Bring to a boil, reduce the heat to low, and simmer gently until tender, partially covered (about 3 hours).

Remove the meat and vegetables from the pan and set aside to cool. Discard the cooked vegetables.
Add the remaining vegetables to the pot of hot liquid. Dice the chicken into 1-inch pieces and add to the pot. Continue to cook for 1 hour. Add the cooked meat to the pot and heat until warmed through.

Taste, and adjust seasoning with salt and pepper. Ladle the stew into serving bowls, garnish with parsley and serve with hot cornbread or biscuits. Serves 10-15.