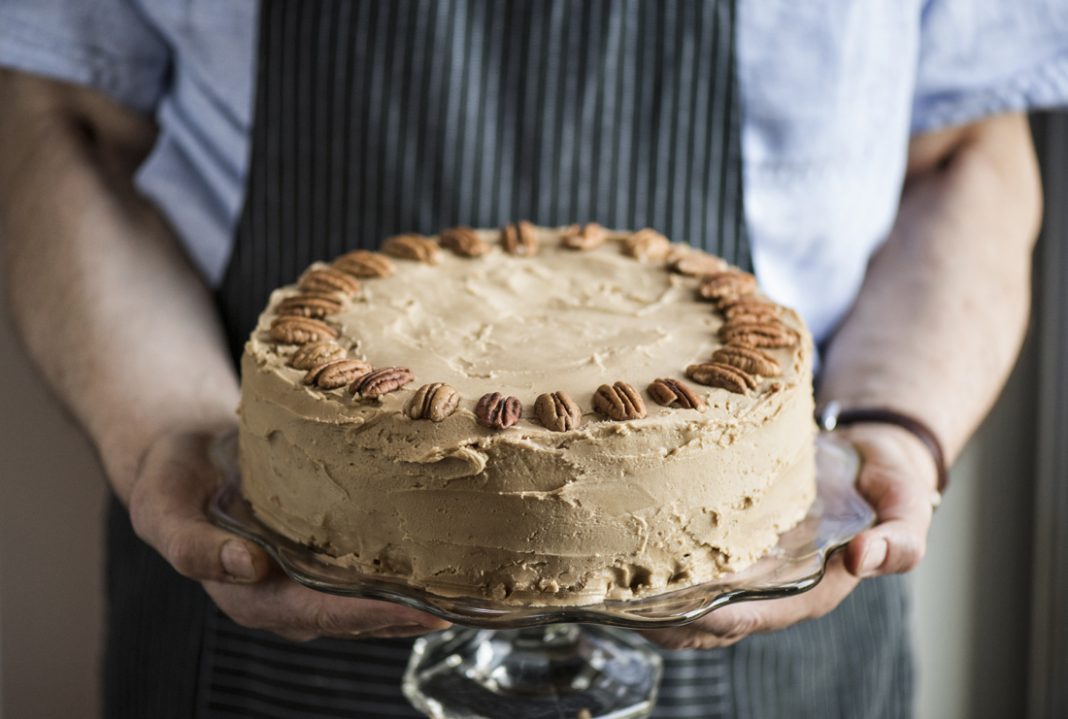 Recently, a neighbor stopped by to give me a little gift, just something she had found while going through her files that she was sure I would be interested in. She presented me with a rare and curious document indeed: an intact copy of “Cissy Gregg’s Cookbook and Guide to Gracious Living.”

This large-format, staple-bound paperback was issued by The Courier-Journal on Oct. 4, 1953. I had seen this cookbook before. When I was assistant food editor for The Courier-Journal in the early 2000s, we had a copy or two in the extensive cookbook library that the newspaper kept at the time. And behind my desk in the now-unused test kitchen at the C-J sat an old-style metal filing cabinet,3-feet deep and two rows of 5-inch by 8-inch file cards wide, filled with recipes. It was from these drawers that Cissy Gregg, identified in this cookbook as “Courier-Journal Home Consultant,” drew for the cookbook.

In the introduction to the book, Gregg says, “During these [last 11] years, we have filed away something over 12,000 recipes and tried out many more than that even. Our place has not been to develop recipes but more to slave over the hot stove and help you use them with success.” Gregg continued to publish recipes in the C-J for 10 more years, clipping out each one as it was published and rubber-cementing it onto a file card on which she typed the date of publication. The cards were filed so meticulously that I was invariably able to locate within a few minutes most recipes that readers asked me for, things they suddenly remembered from 30, 40 or 50 years before and now wanted to try to make again – things like “Katharine Hepburn’s Favorite Brownies” (with a layer of raspberry jam between layers of brownie batter), or “President Eisenhower’s Barbecued Chicken” or “Jennie Benedict’s Fruitcake,” a formidable recipe that calls for a pound each of butter, sugar and flour, 12 eggs, 6 ½ pounds of assorted dried fruit and nuts and a “half-glass” of both brandy and wine, among other ingredients. The recipe calls for baking “slowly” for four hours to produce two 6-pound fruitcakes.

As a good newspaper food editor, Gregg comments on Ms. Benedict’s housewifery style, clarifying for other less experienced but ambitious home bakers that she assumes Benedict’s “half-glass” of spirits can be successfully interpreted as a half-cup of standard kitchen measure, and a “slow” oven likely means one set to 300 or 315 degrees.

All this effort to make a confection that is now little more than a tired holiday joke, something that even ambitious cooks who like fruitcake are more likely to order online from the Abbey of Gethsemani than to undertake in their own kitchens. But this fruitcake recipe is indicative of many of the now quaint-seeming foodways of an earlier generation of home cooks that Gregg recorded for posterity in her once-helpful publication.

When tongue and brains were “Family Fare”

It would seem unlikely now that an American housewife would care to – or dare – serve cold beef tongue to her family, yet in 1953 a recipe for such is among the first half-dozen Gregg chooses to include in her section on “Family Fare.” To make it, the cook is instructed to wash the fresh tongue well, simmer it in salted water for three to four hours until tender, and cool it in ice water before peeling off the skin and “cutting away the roots.”

An equally unlikely dinner dish for the 21st century housewife that apparently would not have fazed her counterpart 64 years ago is veal and brain croquettes. The croquettes are made by simmering two pounds of veal until tender and then grinding the cooked meat. The veal is mixed with a pound of finely chopped calf’s brains, folded into a white sauce, chilled until firm and then shaped “as desired,” rolled in cracker crumbs and deep fried. Gregg suggests serving these croquettes with a mushroom cream sauce, for which she also supplies a recipe.

I imagine the following scenario at the family dining table:

10-year-old Bobby, ravenous from shooting baskets in the backyard slides into his chair, adjusting his napkin and gazing at the serving platter before his Dad: “Oh no! Not veal and brain croquettes again!”

Bobby’s Mom: “Now, Bobby. They are very nutritious. And besides, I’m serving them with the mushroom cream sauce you liked last time.”

Bobby’s Dad: “Be appreciative. We could be having beef tongue.”

Today, it is hard to know what would be trickier to find at Kroger’s – veal you would be willing to boil and grind up, or calf brains. I do recall seeing beef tongue at the meat counter, but that was several years ago; finding tongue is as unlikely as finding brains nowadays.

To be fair, other “Family Fare” suggested by Gregg continues to be familiar: stuffed pork chops, chicken and dumplings, baked or fried fish, baked ham, bean soup. But the straight-faced inclusion of items such as lamb Hawaii (a leg of lamb stuffed with crushed pineapple and basted during roasting with pineapple juice), spaghetti ring, macaroni loaf, frosted salmon mousse and steamed salmon pudding (both made with canned salmon) suggests that, as far as everyday food tastes go, the past is a strange place.

This historic cookbook offers other curious pleasures. Food photography in the 1950s clearly was informed by aesthetic standards different from those we adhere to today. Perhaps the somewhat fuzzy photographs in the copy I was given are due to the ravages of time on photogravure printing on newsprint. The result that we see today depicts foods that do not read as appealing as they likely were in reality. I am not sure any photographic or printing technique could help the photo in the Delmonico’s pasta advertisement on the back of the cookbook – a large round dish of what is most likely macaroni and cheese, with spokes of whole hot dogs radiating from the central hub of hot dog slices nestled on a bed of parsley. The dish is inexplicably labeled “Fancy Fair for Easy Fixin.”

Being a newspaper publication, the cookbook is supported by advertising, and browsing through half-century-old ads is always entertaining. Some ads make us wistful: a reminder of forgotten appliance brands like Philco and Norge refrigerators; local supermarkets like Scotty’s and Steiden, long defunct; retail institutions like Lemon & Son Jewelers and Stewart’s department stores that have disappeared. Other ads are head scratchers – did the marketplace once really support items like Krey brand canned sliced beef with brown gravy over rice, or Old Judge Irradiated coffee? (“The only coffee that’s irradiated – an exclusive process that makes Old Judge’s secret blend of the world’s finest coffee taste better!”) And then there is the occasional surprise that satisfies: An ad for KitchenAid stand mixers shows an appliance that looks exactly the same as it does today, evidence of the endurance of excellent functional design.

Cissy Gregg’s cookbook, and the voluminous recipe files which she amassed in her long tenure, are clearly vivid historical documents of daily life in the mid-20th century. When I was at the C-J, I fielded quite a few requests for the cookbook – did the newspaper still have any copies for sale? It didn’t, and it is not clear to me what has become of those file cabinets full of thousands of yellowing recipes clipped from the newspaper. The cookbook is available from online book purveyors, for prices ranging between $25 and $50 the last time I looked.

Many of the recipes that Cissy Gregg printed she attributed to various local home cooks – invariably women and almost always referred to by their married names, Mrs. So-and-So. Perhaps the most famous of these is the one that I think is well worth sharing – Mrs. Creason’s jam cake. This has become a classic Kentucky dessert, one that has been widely shared, but not for a while. I am happy to be able to continue to pass this along.

There are many variations on this cake floating around, with many recipes calling for it to be made in a Bundt cake pan. I was going to do that until my wife objected, insisting that this was everyone’s preferred birthday cake, and as such, had to be made as a layer cake and had to be made with caramel frosting. So, this is how Cissy Gregg reported that Mrs. Herman Creason from Benton, Ky. made her jam cake.

Another note: Other jam cake recipes I have seen call for soaking the cake with up to a cup of Bourbon. If you choose to make the cake for your 12-year-old’s birthday party, omit that step.

Heat oven to 325 degrees. Butter two 9-inch cake pans, line with parchment paper rounds cut to fit, and butter the tops of the parchment. Dust buttered pans lightly with flour and set aside.

Cream butter with a hand or stand mixer and gradually beat in sugar for several minutes until mixture is light and fluffy. Add eggs one at a time and beat in well.

Sift flour before measuring. Then, sift again with salt and spices. Dissolve baking soda in the buttermilk.

Beat in the flour-spice mixture alternately with the buttermilk in three cycles, beating well after each one. Lightly dust the fruit and nuts with flour, and fold into the batter. Then, fold in the blackberry jam. Divide batter evenly between the two prepared cake pans and bake for 45 minutes, or until the cakes test done in center and the sides are browned nicely and start to pull away from the sides of the pan. (It is important to let the cake bake through thoroughly. The best test is to see the sides browned and pulling slightly from the sides of the pan.) Let cool before removing from pan to a cooling rack. Frost when cooled to room temperature.

For the Caramel Frosting

Cissy Gregg and Mrs. Creason used a boiled icing, requiring heating the caramel mixture to soft ball stage. This more up to date, easier to manage recipe worked just fine. Using salted butter gives a subtle salted caramel taste. If you like a bit saltier caramel, beat in additional sea salt 1/4 teaspoon at a time, tasting carefully so you don’t overdo it.

Melt butter in a saucepan over medium low heat. Add brown sugar and cream and cook, stirring, until sugar completely dissolves and mixture is smooth, two or three minutes or so. Remove from heat and stir in vanilla. Transfer to a large bowl.

With a hand mixer, add powdered sugar a bit at a time, beating well after each addition and scraping down sides as needed. When all the powdered sugar is beaten in and mixture is smooth, taste and add more salt in small increments, if desired. If too thick, beat in more cream a tablespoon or so at a time until spreading consistency is reached. F&D