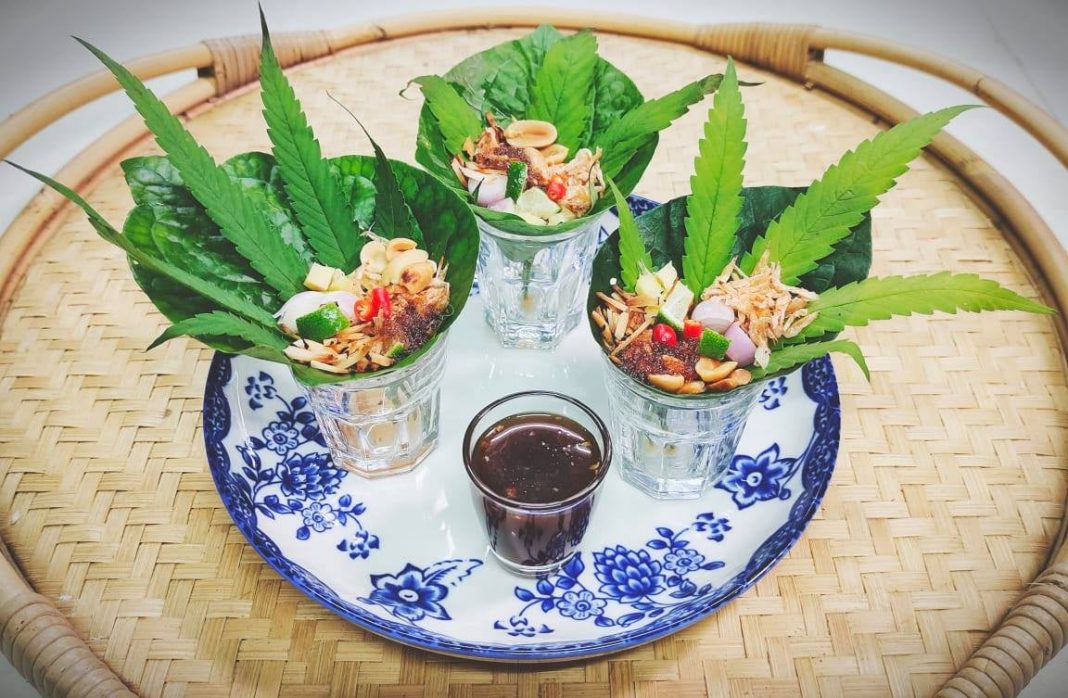 Each Sunday at F&D we consider culinary topics from the dusty “edibles and potables” three-ring binder, as existing outside the boundaries of our metropolitan Louisville coverage area, and you can rest assured that cannabis cooking in Thailand fits the bill, although for my money, Murray Head was much better as Judas in Jesus Christ Superstar than Freddie Trumper from the original Chess concept album. But in the end, it’s all personal taste, right?

In 2019 Thailand became the first country in Asia to legalize cannabis for medical purposes, and soon afterward those parts of the plant with less than 0.2% THC were declared legal for use in cosmetics and food.

The Economist of London picks up the story.

There is a long tradition in Thailand of cooking with cannabis. Thais began mixing the plant, which is native to Asia, into herbal remedies and then food centuries ago. Even after it was criminalised in 1934, many Thais carried on cooking with it. Chakree Lapboonruang, a 30-something Bangkokian, says his father regularly tossed cannabis leaves into the pad gaprao (basil chicken stir-fry) he cooked for the family. “When you have something tasty, [cannabis] makes it better,” Mr Chakree says. “It’s just like msg, except it’s natural.”

Ban Lao Rueng was the first eatery in Thailand to go all-in, and began cooking with cannabis ahead of other establishments because of a pre-existing affiliation with a hospital specializing in herbal medicine.

Weed is on the menu at Thailand’s first cannabis-cookin’ cafe, by Chayanit Itthipongmaetee (Coconuts Bangkok)

Good moods are on the menu just a couple hours outside Bangkok at what looks to be yet another charming and folksy riverside cafe, albeit one transformed by embrace of cannabis-based wellness. It’s there that Amara Akamanon preaches the benefits of a menu infused with ingredients that were criminal just last month.

Two weeks after the law was amended to declassify most of the marijuana plant as illicit, Ban Lao Rueng (Storytelling House) in Prachinburi city has updated its menu with cannabis dishes such as the plate of “tempura weed,” as well as cannabis juice-infused drinks and pot pizza.

Asked if these cannabis dishes have the oomph to render one “zonked,” Amara has a good-natured response.

“You might feel uplifted by my food,” she said. “Your mood might improve. Maybe you’ll get the giggles. You will relax, sleeping better that night.”

Or you might not feel much at all. Amara only cooks with cannabis leaves, which have very little THC. (The high-inducing chemical is concentrated in the flower or bud.) Catching a little buzz is nice, she said, but what really intrigues her is the plant’s taste.

Munching cannabis leaves is like eating wheatgrass — earthy, not too pleasant — but when the leaves or stems are minced and added to food, it brings out the umami.

Ironically, 2021 was my chosen year to finally learn how to make a handful of Thai dishes, including red curry, pad thai and drunken noodles. Perhaps at some point down the road, amateur American cooks like me can consider umami adjustments like those being pioneered at the Storytelling House.