Home FOOD Edibles & Potables: I got food, but I’m not a foodie 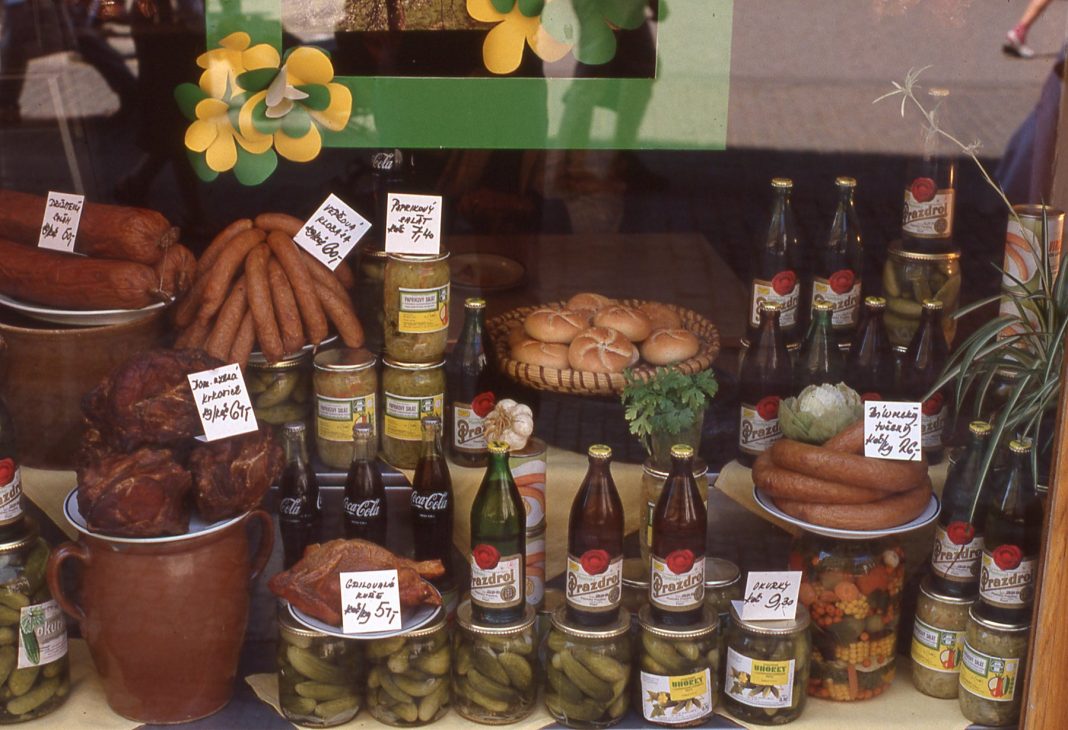 To paraphrase Esquire’s Charles P. Pierce: pertinent musical accompaniment to the last post of the week, by The Killers. Sunday is a time to range outside our usual coverage area and examine items of broader “edible and potable” interest. Today, a consideration of self-identity that originally appeared at the digital editor’s blog.

What is a “foodie,” anyway, other than a concept I’ve never thought applied to me in the slightest?

According to Merriam-Webster, a foodie is “a person having an avid interest in the latest food fads.”

Cambridge Dictionary describes a foodie as “a person who loves food and is very interested in different types of food.”

And, at Wikipedia, it’s “a person who has an ardent or refined interest in food and who eats food not only out of hunger but due to their interest or hobby.”

These definitions surely cover the waterfront, length and breadth, which by no great coincidence tends to be the place closest to the boats, and consequently where the freshest fish are to be found. Of course, as the late Anthony Bourdain taught us so many years ago, there are enduringly solid reasons for avoiding theoretically fresh seafood in restaurants in Keokuk on Monday.

Why? Read his book Kitchen Confidential and find out, but just because I remember this passage after two decades, it doesn’t necessarily make me a “foodie.”

In the increasingly remote days of my youth, certain of the elderly wits around town used to say “I don’t eat to live – I live to eat,” and while this statement encapsulates my own point of view, chronologically as well as measured by a current poundage in the neighborhood of 260, the word “foodie” has never seemed proper as a descriptor.

Where did this whole foodie business start, anyway? I turn to The Guardian for answers.

People with an overweening interest in food have been calling themselves “foodies” since a Harper’s & Queen article entitled “Cuisine Poseur” in 1982, one of whose editors then co-wrote the semi-satirical The Official Foodie Handbook of 1984. The OED’s very first citation of “foodie” is from 1980, an oozing New York magazine celebration of the mistress of a Parisian restaurant and her “devotees, serious foodies”.

“Foodie” has now pretty much everywhere replaced “gourmet”, perhaps because the latter more strongly evokes privilege and a snobbish claim to uncommon sensory discrimination – even though those qualities are rampant among the “foodies” themselves. The word “foodie”, it is true, lays claim to a kind of cloying, infantile cuteness which is in a way appropriate to its subject; but one should not allow them the rhetorical claim of harmless innocence implied. The Official Foodie Handbook spoke of the “foodism” worldview; I propose to call its adherents foodists.

The term “foodist” is actually much older, used from the late 19th century for hucksters selling fad diets (which is quite apt); and as late as 1987 one New York Times writer proposed it semi-seriously as a positive description, to replace the unlovely “gastronaut”: “In the tradition of nudist, philanthropist and Buddhist, may I suggest ‘foodist’, one who is enthusiastic about good eating?” The writer’s joking offer of “nudist” as an analogy is telling. I like “foodist” precisely for its taint of an -ism. Like a racist or a sexist, a foodist operates under the prejudices of a governing ideology, viewing the whole world through the grease-smeared lenses of a militant eater.

Foodie, foodist; gourmets, gourmands and gastronauts. Epicures. It all reeks of self-satire. Can’t we just be eaters? After all, when it comes to drinking beer, the simplest and least annoying term of reference remains “beer drinker.”

Granted, some people insist on calling me a beer “expert,” but I’m painfully aware of how much I don’t know about the topic in spite of reveling in it for the past 40 years.

The term “beer geek” is too pimply adolescent for me (that “cloying, infantile cuteness” again), and “beer snob” frankly sounds like a pejorative. “Connoisseur” and “aficionado” both strike me as pretentious.

Before the television series Seinfeld became a stale and anachronistic cobwebbed cultural artifact, there were utter morons who preferred the term “beer Nazi.” I’m down with gazpacho, but the comedian’s “soup Nazi” humor didn’t improve a gutter word, one already objectionable by its own considerable historical demerits.

But yes, when I’m not drinking lots of beer, I’m probably eating all sorts of food. True, I’ve been in the food service business for more than 30 years. Indisputably, I’m currently being paid to write about food, hence today’s prose.

So, what the hell am I, apart from consistently hungry?

My personal preference remains “trencherman,” or one possessing a hearty appetite and a disdain for portion control. My pal Graham tagged me as a “trencherman” when we road-tripped to the Pacific Coast in 2006; I kept finishing his leftovers after polishing off my own platters, before draining a growler of local beer.

Trencherman? I resemble that remark.

Happily, and quite apart from restaurant meals, cooking appeals to me. I listened just enough to the lessons of my high school home economics teacher to feel comfortable enough in the kitchen.

Her name was “mom” and she taught at home, too.

There’s nothing intuitive about it. I follow recipes, measure everything and seldom improvise, although since the advent of COVID-19, having prepared more home-cooked meals during the past four months than ever before, I’m getting better at using the ingredients I have available, and making substitutions when necessary.

Victory gardening doesn’t interest me much, although I’ve planted tomatoes out in the yard the past few years. It took a while to get them in the ground amid the pandemic, primarily because I didn’t feel much like going out and battling the unmasked covidiocracy at the nursery in order to buy tomato plants.

Trencherman and amateur cook? Sure, just leave “foodie” out of it.

Perhaps my biggest beef with the word “foodie” is that it always sounds faddish to me, and as a contrarian, chasing trends is a form of exercise always calculated to alarm and perturb.

Granted, self-identification as a “foodie” can be good-natured and self-deprecatory, but just as often, out there in American Narcissism Land, it devolves into a secret club with self-contained language, passwords, knowing winks and nods, and various efforts to impress. Allow me to shrug. In terms of craft beer, I’ve been there and done that, and promise it will never happen again.

I’ve never watched the Food Network, and shows like Top Chef, Chopped, Bizarre Foods or anything with some guy called Fieri aren’t going to be streaming from my device any time soon.

Food interests me; very much, in fact. Sensationalizing and trivializing it, not so much. As with beer and pubs, all of my interests collide during a meal: history, sociology, geography and the pervasive culture of it all.

Whatever latent interests about food and cooking were lurking inside me during the early 1980s became overt following my first trip to Europe. Once I’d traveled overseas, there was a problem; I’d become enamored of menu items from the various cuisines, and Louisville had far fewer world eateries then as now. The only solution was to learn how to replicate them as best I could with my own kitchen as base.

That’s why one of the most influential books of my life is Betty Crocker’s International Cookbook (1980 edition). My friend Bob discovered it. I’d already found a few Greek and Russian recipes at the library prior to the trip in 1985, learning that venison was a fine stand-in for lamb in moussaka, and borscht wasn’t necessarily thin or cold; make it Ukrainian and it could feed legions.

It was a start.

The photocopied recipes accumulated: Segedínský guláš (pork and sauerkraut goulash), pasta puttanesca, herring salad, paella, steak and kidney pie, gołąbki (stuffed cabbage rolls), colcannon, cassoulet, risotto – and the list goes on and on. Each trip yielded a new eating experience, to be attempted once I was back home.

In Europe, these foods generally had been consumed in small family restaurants (and the occasional huge beer hall), and accompanied by local beer, wine and slivovitz. Those beverages weren’t common back then, but they or their stylistic equivalents could be found with a little effort. I never mastered any of it, just improved sufficiently to mark time, keeping alive the dream of the next journey.

And here’s the rub: The majority of European meals and libations were nothing fancy. They were cooked by ordinary people, for ordinary people, and derived from regional ingredients. To my mind, these recipes were synonymous with national and ethnic heritages, nourishing me and also mirroring all the things I was trying to learn by traveling in Europe to begin with. They were inexorably tied together, bound into an immersive experience.

Last week that dog-eared international cookbook once again came off the shelf. On hand were a half-bag of noodles, onions, eggs, and some ham in the fridge that was about to go south. I remembered an Austrian recipe for ham and noodle casserole (Schinkennudeln) – with sour cream, butter, caraway seeds, black pepper and a pinch of smoked paprika.

We had a bag of frozen peas and a bottle of Italian white table wine. All that was missing was a nice crusty loaf, but you can’t always have everything.

I got food, but I’m not a foodie. And it was a wonderful meal. To be honest, I’d have preferred being in Salzburg. Sadly, there’ll be many more such meals prepared at home before Europe comes around to us again.

All I can do is keep eating; trust me, I will.