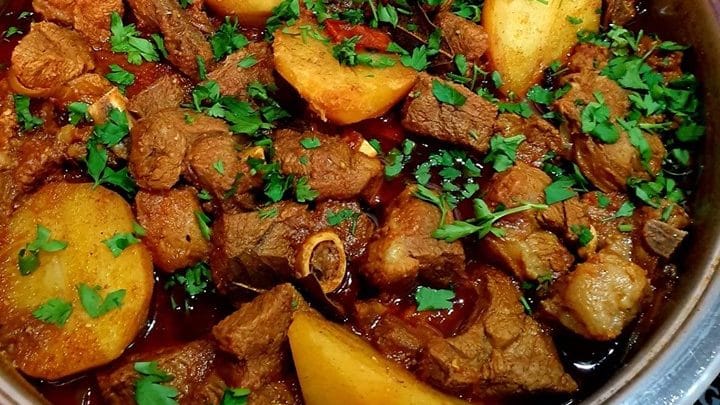 Edibles & Potables is Food & Dining’s weekly Sunday brunch for digressions culled from the world outside our metro Louisville coverage area.

Today’s topic is Durban curry, but first a confession.

Prior to Friday morning, I’d never heard of Durban curry. During the course of messaging with my Danish friend Kim, a former resident of Cape Town who now lives in the Netherlands, he mentioned preparing the South African curry with the assistance of Madame Jeanette. Since Jeanette isn’t his wife’s name, I was doubly confused. A friend of the family, perhaps?

No worries, because Kim quickly reminded me that “she” is a hot pepper.

In an article by food writer Ishay Govender-Ypma, the “dark, complicated history” of Durban curry is explored.

In Ultimate Curry Bible, Madhur Jaffrey points out that Durban curry is “a collective spicy cuisine in which regional specifics were replaced by a more general ‘Indianness’.” Over time, a blend of South African cultures helped shape Durban’s culinary identity.

She continues, “Durban curry and rice was labeled a ‘national dish’ in 1961 in Indian Delights by Zuleikha Mayat and the Women’s Cultural Group, an instrumental community collection that was also the first cookbook by local Muslim authors.”

The port city of Durban is situated  on South Africa’s eastern coast, with the Indian Ocean a ready conduit for trade with India, given that both India and South Africa were British colonial possessions in the 19th century. In truth, commerce wasn’t restricted to items.

The story of this cuisine commences long before my ancestors, the indentured Indians, arrived in Durban. More than 150,000 Indians were sent to the South African port city at the request of the British between 1860 until 1911, mainly agricultural laborers from lower castes. They were destined for the unruly sugar cane plantations, railways, fishing and boating industries.

An earlier article about Durban curry by Govender-Ypma at Vice bears a title that pulls no punches: “The Brutal History of South Africa’s Most Famous Curry,” subtitled “The real story of Durban curry, the dish that sparked countless urban legends.”

When you talk about the cuisine of South Africa, a culturally and ethnically diverse country with no less than 11 official languages, Durban curry comes up in the first breath. Maybe that’s not surprising, necessarily. Durban is a mini-India, outside India; the office of the Indian Consulate in Durban confirms that the city has the highest concentration of Indians (800,000) of any city outside of India. But the Durban curry is an anomaly—loved fiercely by locals and rarely so by Indians from India, feared by those unfamiliar with the complex layers of spices, the glossy sea of orange-tinged oil that floats to the top, the flavor profile that can be described as linear and unrelenting—it burns from the moment it hits your tongue.

I love learning, and enjoy casual cooking at home. Accordingly, there are hundreds of Durban curry recipes available online for home chefs wishing to have a whirl, perhaps even with Madame Jeanette.

One of them is the source of today’s cover photo credit: Durban mutton curry recipe.