Home DRINK Beer Hip Hops: An excellent day at the Augustiner in Salzburg, 2003 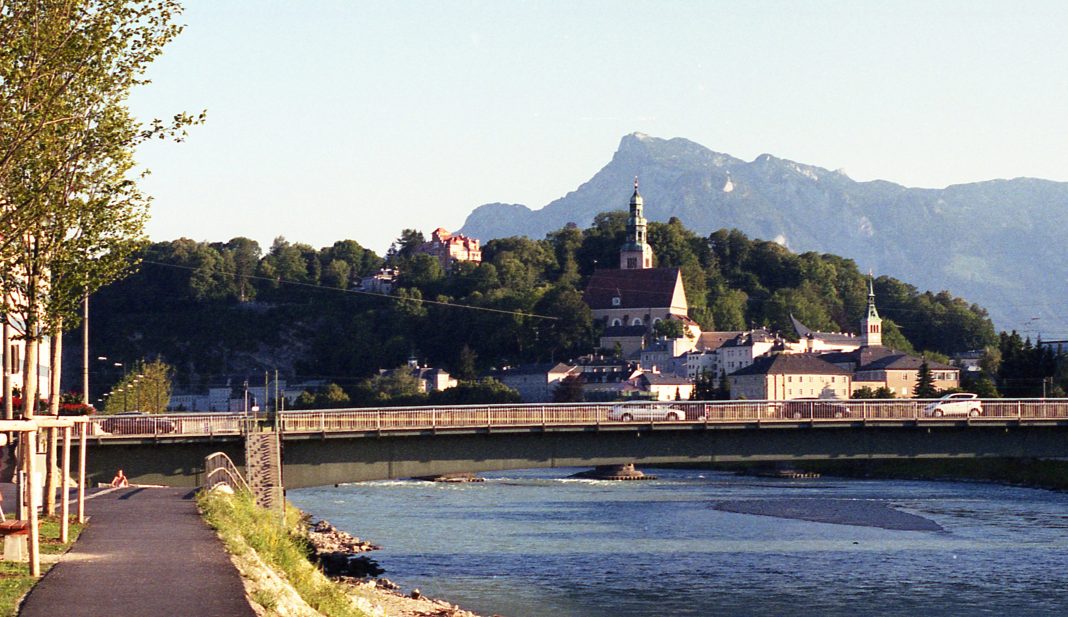 All this talk of snow has me recalling good times in the sunshine with beer, of course.

In 2003 I  took a 27-day bicycling holiday in Germany and Austria., starting all by myself and later meeting up with good friends. The ride began a few miles from Frankfurt, following various cycling routes to Vienna, roughly a 500-mile trip. Many of the paths were dedicated to bikes alone, and most of them followed the rivers: the Main River path from Frankfurt led to the Tauber River, cross-country to the Altmühl River watershed, flowing into the Danube, then from Kelheim (where Schneider Weisse is brewed) all the way to Vienna.

There were side excursions, and from Vienna I stowed the bike on the train to Munich and hit Bamberg for still more beercycling with old pals and a Schlenkerla brewery tour. Total bike mileage came to around 625 miles. All but a few of those summer days were sunny and dry. It was absolutely glorious, and a trip perhaps incapable of being topped, ever again.

Roughly halfway through the Danube journey, Craig, Bob and I rolled into Linz, Austria and loaded our bicycles on a train bound for the beautiful mountain city of Salzburg. The weather was gorgeous, the Alps were in full view, and there was ample time for short bike trips and sightseeing.

The photos that follow have nothing whatever to do with bicycles. What you’ll be seeing are views pertaining to beer, which will come as no great surprise to anyone who knows me.

That’s because it was a pleasure to return in 2003 to the Augustiner Bräustübel, home of Müllner Bräu. It’s a venerable brewery and tavern founded by monks in 1621, and the first real German-style beer garden I ever experienced during my first European adventure in 1985.

As it turned out my last photo on the roll of color film was the church complex and brewery ahead of us (today’s featured view). I changed to a roll of black and white and tried to capture the scene at Augustiner, inside and out. In a moment, those photos.

Inside the Augustiner are various public rooms with heavy tables, excessive woodwork, tile stoves and stained glass windows. The “Schmankerlgang” is a sort of food court where local vendors rent space and vend all sorts of edibles, from pretzels and sausages to full meals with schnitzel and all the trimmings. Note the Steckerlfisch — grilled fish on a stick, a with a choice of either trout or salmon on the day we visited.

We entered the brewery from the smaller backstreet entrance. In 1985, in a state of excitement and youthful muddle, my first choice of entry doors from the narrow lane was utterly mistaken. I heard people singing, stepped across a threshold through a partly ajar door, and found a choir practicing. One of them saw me and affably gestured: go out, to the left, then down the stairs.

In terms of the main gate on the other side of the brewery, there’s a bus stop and also a parking area; typically, you’ll see far more bicycles than cars.

On a summer’s midday in 2003 the beer garden was the same as it had been in 1985. I fell in love all over again with this relaxed Central European way of life. Hundreds of beer lovers were seated at tables, shaded by those towering trees, surrounded by stone walls and stucco, virtually all of them drinking the malty house-brewed Märzenbier.

It was mostly self-service, although there may have been a full-service section with servers. We joined the line for beer. A cashier accepted payment and handed back a receipt. Upon choosing a liter (33.8 ounces) ceramic mug from the freshly washed public stack, one must ritualistically rinse it in a fountain of cold water, hand both mug and receipt to one of the aproned men pouring the deep golden beer from a tap embedded in a wooden barrel, and prepare for nirvana. My friend Bob shows you how, below.

Teens drank alongside elderly men. There were people playing cards, songs for singing, chicken bones and carts filled with emptied mugs. Strangers shared tables and bought rounds. Worldwide languages were spoken. I thought back to my initial visit almost two decades before, when I ate, drank, used the WC, drank some more, and returned the following two nights to do it all over again, each time walking 25 minutes back to my hostel lodging, feeling perfectly contented and wishing we could do the same at home with automobiles a distant afterthought.

The photos are arranged in approximate chronological order. If the gallery will not enlarge the photos for closer viewing, try opening one in a new tab.

In the decades since, I’ve visited dozens of similar beer gardens in Central Europe. Some proved superior to the Augustiner, but it’s the first time you’ll always remember, isn’t it?