Home DRINK Beer Hip Hops: Like I was saying, Oktoberfest in July, Halloween in …... 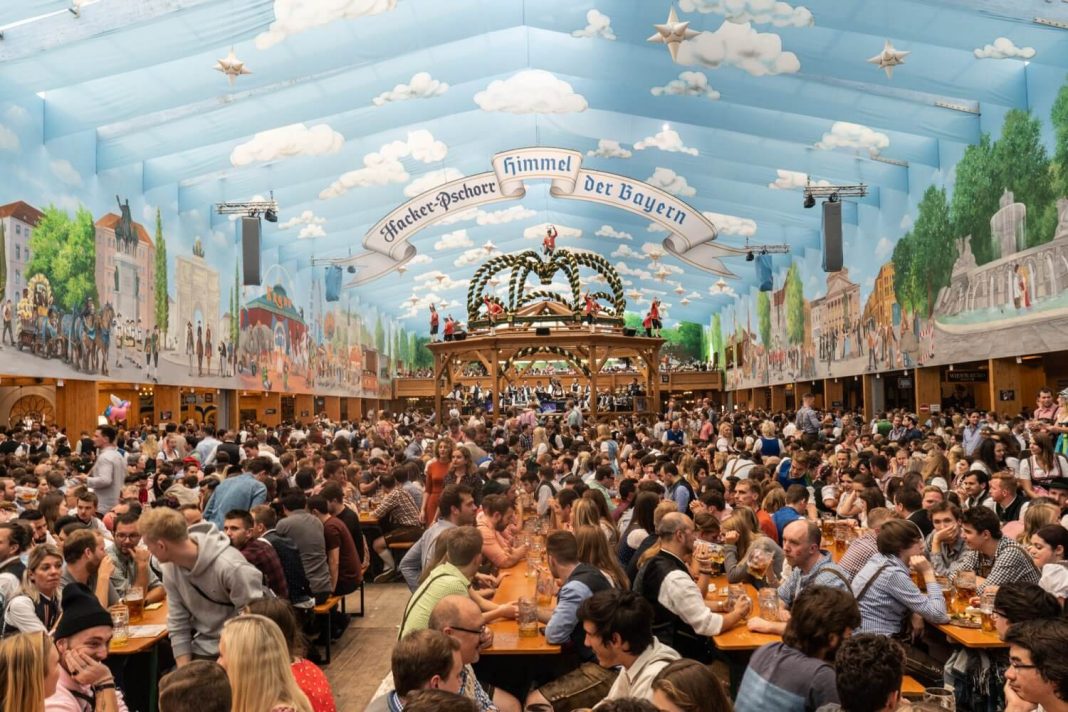 The following installment of our weekly beer dialogue first appeared on August 17, 2020, and is being reheated today (bei stovetop, nicht microwave) because of two excellent reasons: (1) it remains relevant, and (2) I was busy the past weekend finishing a profile for the forthcoming fall edition of Food & Dining Magazine and didn’t have time to conjure something new. Will the new norm of shipping delays affect imported Oktoberfest beers this year? Every ordering cycle is a new reality, and we’ll learn the answer yesterday.

Even before climate change became a heated barstool topic back in the days when we could still sit at the bar and be topical absent quarantine, Ohio Valley summers were just as capable of attaining high levels of humid discomfort, although admittedly these sieges didn’t last as long as they do now.

The advent of air conditioning solved the problem – and also made it worse by warming the globe even more.

Before coal-fired AC became an American birthright, front porches at dusk simply had to do. Pre-Prohibition buckets of fresh beer fetched from the local tap house by the eldest male heir of the household helped to ease heat stroke, but folks had to drink quickly for their liquid solace to remain cool.

At least a few neighbors might offer drainage assistance, especially if a breeze kicked up.

It is now August, and a review of the weather report for the week to come reveals day after day of 90-plus-degree blast furnace intent. A classically-trained craft beer drinker’s thoughts might have long since turned to seasonal wheat ales, Kölsch, Pilsner or various fruited sours, perhaps the stray session-strength IPA, these being a few examples of milder beer styles with higher thirst-quenching quotients, ideally suited for sun, sweat and suffering.

However, dissonance is forever afoot, and the struggle is real when it comes to seasonal beer style creep. Why have literally dozens of Oktoberfest lagers and pumpkin-influenced ales already started to appear on package store shelves and at your favorite local tap house?

Why were some of them there as early as mid-July?

Aren’t these styles commonly associated with colorful autumns, German drinking marathons and crisp, nippy evenings in the patch with Linus, waiting for the Great Fermentable to rise?

Yes, they are, and no, these days it hardly seems to matter. The rowdy modernist angel on my left shoulder says enjoy the premature bounty, while the traditionalist pedant on the right disagrees.

From the moment they’re weaned with a sip from daddy’s longneck, aspiring beer aficionados know that the most famous Oktoberfest gathering takes place in the Bavarian capital of Munich.

(Except for 2021, of course, thanks to the ongoing pandemic).

I’ve attended Oktoberfest in Munich, and the oft-told stories of delightful excess are accurate. For more than two weeks, delirious throngs descend daily on a prefabricated beer city, paying airport prices for liters of lager, devouring sausages, schnitzel and rows of chickens on spits alongside the random roasted ox, and carousing until closing time, when they’re not-so-gently corralled into the September night.

Oktoberfest in Munich begins in September, and usually only the last two or three hangovers extend into the festival’s namesake month.

Why? For one, northern European summers historically have been shorter than ours, and harvest celebrations can begin as early as late August. In Munich, a 19th-century royal wedding fete coincided with the usual fall revelry, providing a sufficiently convenient excuse to fix an early start for October’s fest, as intended to innovate some quality autumnal beer drinking time annually for the next two to three centuries.

Many beer styles we know today are of European origin, evolving over the ages according to slow, rural, agricultural rhythms. Before refrigeration, it was too hot to brew in high summer, and so brewing schedules were tailored to accommodate. Oktoberfest-style lagers intended for autumn consumption were brewed in late winter and early spring, then aged (lagered) until needed, which is why they’re sometimes called Märzen, from the German word for March.

Nature has its way, humans have theirs, and as beer styles, Märzen (the original fuller-bodied version) and Oktoberfest (or Festbier, the ubiquitous toned-down modern variant) suit both season and occasion. Compared with everyday golden lager, they’re marginally stronger in alcohol, slightly heavier in the mouth, often colored in tawnier shades of amber, brown and orange, and offering malty flavor profiles with the discreet, yet firm presence of classic Bavarian “noble” hops.

In relative terms, pumpkin ale is as newfangled as Märzen and Oktoberfest lagers are venerable. There are Colonial American antecedents for the use of pumpkins in brewing, but not until the craft brewing movement, and perhaps Halloween’s transformation into the year’s favored (and raucous) adult holiday, did a new generation of pumpkin-inspired creations appear.

Some brewers use pumpkin as an active ingredient, as with Dogfish Head Punkin Ale, while others, like Shipyard’s Pumpkinhead, add pumpkin pie spices. Alcohol contents typically are moderate, but Schlafly’s is 8% abv. There are so many of them now, formulated in myriad ways, that groaning store shelves yield a diverse bounty of labels for a pumpkin fan’s sampling.

Differences aside, these concoctions redolent of pumpkin-laced imagery seem most appropriate for the period of cooler weather between Halloween and Thanksgiving, and yet, as with the Oktoberfests, we see them in summer’s peak boil. The problem for a beer buyer like me with limited storage space is if I wait too long, until the traditional season actually seems appropriate, there’s a risk pumpkin ales will be sold out.

By now, you might well be asking: “Who the hell cares?”

Indeed, today’s craft brewery can produce any style of beer, any time, year round, irrespective of the season and the prevailing temperature. Somewhere in a hothouse, a pumpkin is being grown, and nutmeg, allspice, cinnamon and ginger can be procured at any supermarket. Each ingredient required to brew an Oktoberfest-style lager, including authentic malts, hops and yeast from Germany, sit ready and waiting to be ordered, whether February or November.

Brewing technology long since usurped agrarian tugs of seasonal romance, and the prerequisites of marketing, pre-selling and delivering seasonal beers to an eager public shift the very meaning of the word “seasonal.” These days it implies limited overall availability, not time of year; if you want a chillier venue, notch down the home thermostat or head to Baffin Island. Otherwise, hurry up and get some, because after all, Christmas ales must be available by late September.

The verdict? Ultimately, as with so many other examples of societal decay, seasonal beer style creep occurs because we as consumers favor it. Those of us in the beer biz adapt, and we’re all relatively happy. Especially during COVID times, everything’s been up in the air; whichever beer gets us through this long, strange, enduring night … it’s all right.

And yet for me, the classicist angel’s voice is insistent. Although it is unrealistic in the modern world, I must admit to a stubborn, nostalgic and almost elegiac wish that seasonal beers like Oktoberfest and pumpkin ale would remain wedded to a time of year when sweaters are worn, not bathing suits, even if this means waiting for the first cold snap of the season in January.

But what do I know? I’m just the beer guy, singing the beer guy’s song (seasonally, of course).