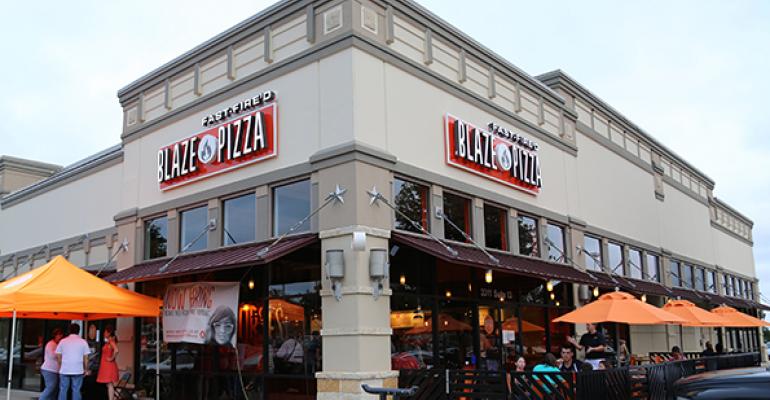 We recently posted about several new restaurants that have opened in recent weeks. Several other new restaurant announcements have been circulating as well, but about businesses planned for the near future. Aware that, as the saying goes, there is many a slip twixt cup and the lip, nonetheless, here are some future dining choices we will be keeping an eye on.

Blaze Fast-Fire’d Pizza, which touts itself in a press release as “the fastest growing restaurant in history,” has started construction for its fourth Louisville-area location at 1225 Veterans Square Blvd. in Clarksville, Ind., at the Veterans Crossing development.

Blaze Pizza’s niche in the richly-saturated pizza market is that customers customize one of the menu’s personal-sized pizzas or create their own from the restaurant’s ingredients list, which is then shoveled into an open-flame, super-hot oven to be baked in two or three minutes.

A press release also touted that the Clarksville location is being built with recycled and sustainable materials, will use eco-friendly packaging and feature energy-efficient LED lighting. The new restaurant is expected to open by Spring, 2018. The other Blaze Pizza locations are Middletown, 13317 Shelbyville Rd.; Paddock Shop, 4118 Summit Plaza Dr.; and St. Matthews, 4600 Shelbyville Rd.

Feast BBQ, which started a few years ago in New Albany, and opened a second location on Market St. in NuLu, is planning to open a third store in early 2018 in Jeffersontown’s Historic Gaslight Square District, when it renovates a former former muffler repair shop 10318 Taylorsville Rd., at the corner of Watterson Trail.

Ryan Rogers, who owns Feast BBQ, also announced plans last year to develop a restaurant in the 800 Building at 800 S. Fourth St. We will forward further word on that concept as we hear more details.

The owner of The Mysterious Rack, the upscale hat store on Fourth St., has announced plans to open a tiki bar at 411 W. Chestnut St., just around the corner her hat shop and boutique. In a story in Insider Louisville, Olivia Griffin, who lived for a while in San Francisco, said she misses the peculiar ambiance of places like Smuggler’s Cove, Forbidden Island and Trader Vic’s, and has always wanted to bring the tiki-bar concept to Louisville.

The Insider Louisville story cites Griffin as saying, “There’s something magical about tiki bars, in particular, because when you walk in, you feel transported to another place and time — not quite identifiable but lovely and exotic. My place will be mysterious, lush and full of the interesting characters that keep Louisville weird.”

The cocktail list will be focused on “inventive versions of classic Polynesian drinks,” and she plans to have a resident band, The Bluegrass Shack Boys, fronted by her husband, Rick Quisol, (who plays with the Derby City Dandies). The band will include, of course, a Hawaiian steel guitar player.

Griffin has not yet announced a name for her new enterprise, but hopes to open before the end of the year, and construct a patio by next spring.

Texas Roadhouse is altering its local restaurant mix by closing its location at 6460 Dutchmans Pkwy. and opening its replacement outlet at Shelbyville Rd. and Ten Pin Ln.  The change-over is scheduled to take place between Oct. 31 and Nov. 4.

Most of the Dutchmans Pkwy store’s roughly 175 employees will be moved to the new location across from Mall St. Matthews.  In a story in the Courier-Journal  Josh Garrett, the kitchen manager at the Dutchmans Pkwy. site, said, “We will be the exact same restaurant, just in a different place.”