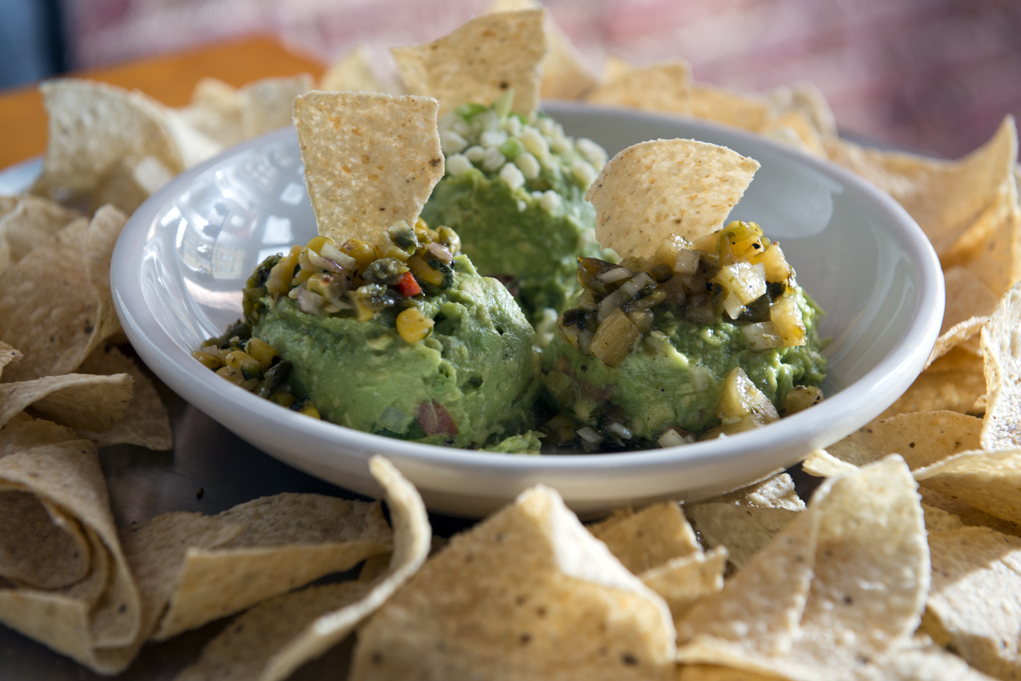 Tony Palombino is at it again.

The dining-concept king who brought fish tacos and potato-topped pizza to Louisville is now serving up “ModMex” cuisine washed down with bourbon and tequila and followed by a chaser of live music in a honkytonk on West Main Street’s Whiskey Row.

The new place, Manny & Merle, which opened in late November in the building at Second and Main that once housed Zena’s Café, features a short list of tacos and sandwiches, house-made salsa, a trio of house-made guacamoles and a couple of salads and desserts, complemented by an extensive list of bourbons and tequilas. The one-sheet menu makes ordering quick and easy, a bonus if you’re on your way to a concert or game at the KFC Yum! Center across the street.

“This is a destination location,” Palombino said. “The bar is the main focus, and we back that up with creative food and round it out with live music four or five nights a week.”
Palombino, the brains behind Tony BoomBozz and AP Crafters, said he’d been eyeing this location for almost a year, drawn by its proximity to the arena, the city’s intention to develop Whiskey Row and “just being downtown in general. It’s an area that’s just hitting its stride.”

He drew inspiration for the dining concept from honkytonks in Texas and California in the 1940s, ’50s and ’60s. “The kitchens were run by Mexican immigrants who served up Old World Mexican – what we now call Modern Mexican, basically a modern take on Mexican street food,” he said. “That’s where the ‘Manny’ comes in.”

“Merle,” of course, is Merle Haggard, who along with Buck Owens and others in 1950s California created the Bakersfield Sound, a barroom country music genre much rawer than the heavily produced Nashville Sound.

The Hag, Hank Williams and Johnny Cash provided the soundtrack at Manny & Merle on a recent visit. The shotgun-style space has been warmed with brick walls up front and wood-plank walls in the back. A black-leather banquette runs down the right side of the restaurant; bar-height tables and tall black stools provide more seating. Large ceiling fans connected by belts that run the length of the ceiling give a nice “old-timey” feel. Servers wear cowboy-style shirts with piping and snaps.

The large bar was built in 1920. Sitting atop it are a miniature Route 66 gas pump, a bass fiddle covered in license plates and a small Woodford Reserve barrel. A nearby chalkboard advertises the $3 bourbon and tequila shots of the day.

“When I saw the location, here on Whiskey Row, I felt compelled to incorporate the history of bourbon” in the concept, Palombino said. The bourbon list currently stands at 54, but he is shooting for at least 60 and a spot on the Urban Bourbon Trail. That would seem entirely appropriate, considering that a large portion of the side of the building is covered by a poster celebrating bourbon innovator and Brown-Forman founder George Garvin Brown, credited with being the first to sell bourbon in bottles.

Manny & Merle also carries 32 kinds of tequila, in keeping with the menu. “People are always amazed by the number of tequilas we have,” said general manager Emily Tolle. Creative cocktails include the popular Sarsparilla (Buffalo Trace bourbon with cinnamon schnapps and root beer), the Sangritatini (a martini featuring El Jimador tequila and house-made sangrita) and the Blue-Eyed Merle, which combines bourbon and tequila, along with sour mix, triple sec and blue curacao.

The place has been busy since it opened, she said, particularly on the day of the UofL-UK game, when former Cards coach Denny Crum stopped by. But things have gone smoothly, which she credited to the overall vision and direction of Palombino, with whom she first worked at AP Crafters, his gastropub in Westport Village.

His philosophy, she said, is “this is what we are; this is who we are; and we will always be this,” she said. “That makes it easy for the staff to execute things well.”

Palombino takes a very hands-on role in developing each of his concepts, from the décor to the food to the beverage program. While he doesn’t have professional culinary training, he does have a background in food, having grown up in the restaurant industry. His father, mother and sister moved to the States from Naples, Italy, and ran Italian restaurants in Lexington and Orlando before moving in 1975 to Louisville, where they operated several other eateries.

In 1997, Palombino opened his first concept in Louisville, Thatsa Wrapp. After selling it, he opened BoomBozz Pizza, home of that chicken-and-potato-topped pizza, the Pollotate. Now in its 15th year, BoomBozz has grown from that one small carryout and delivery store to multiple sit-down locations featuring craft beer as well as gourmet pizza.

About the same time, he also developed Baja Grill – later sold and renamed Bazo’s – which brought fish tacos from the West Coast to Louisville. “Fish tacos have always been dear to me,” he said. “I love fish tacos. I remember when I first put them on a menu and how ‘weird’ that was for some people.” But not for anyone who had ever lived near the Baja Peninsula. “I think everyone who was born and raised in San Diego came to Baja in those first two weeks; they were like, ‘Oh my god, fish tacos.’”

It was while traveling the Baja coast in the early 2000s researching that concept that he first discovered the Mexican street food he’s now featuring at Manny & Merle. The beloved fish taco is on the menu, the cod coated in a batter made with Pabst Blue Ribbon.

Other favorites so far, Tolle said, are the Machaca taco, made with braised beef brisket, caramelized onions and peppers, cilantro and queso fresco, and the chorizo and rock shrimp torta (sandwich). The menu has already been tweaked a bit, Tolle said, to add two desserts (a bourbon flan and sopapillas) and a couple more sandwiches, including one made with pork belly.

“But overall, we’ve gotten really good feedback on the food,” she said.

“Louisville is a great incubator” for new dining ideas, Palombino said. Louisvillians seem more open to trying new things, or to trying a local version of something they’ve sampled elsewhere. “We aren’t inventing things; we are bringing things that fill a niche. Louisville has embraced everything we’ve done.”