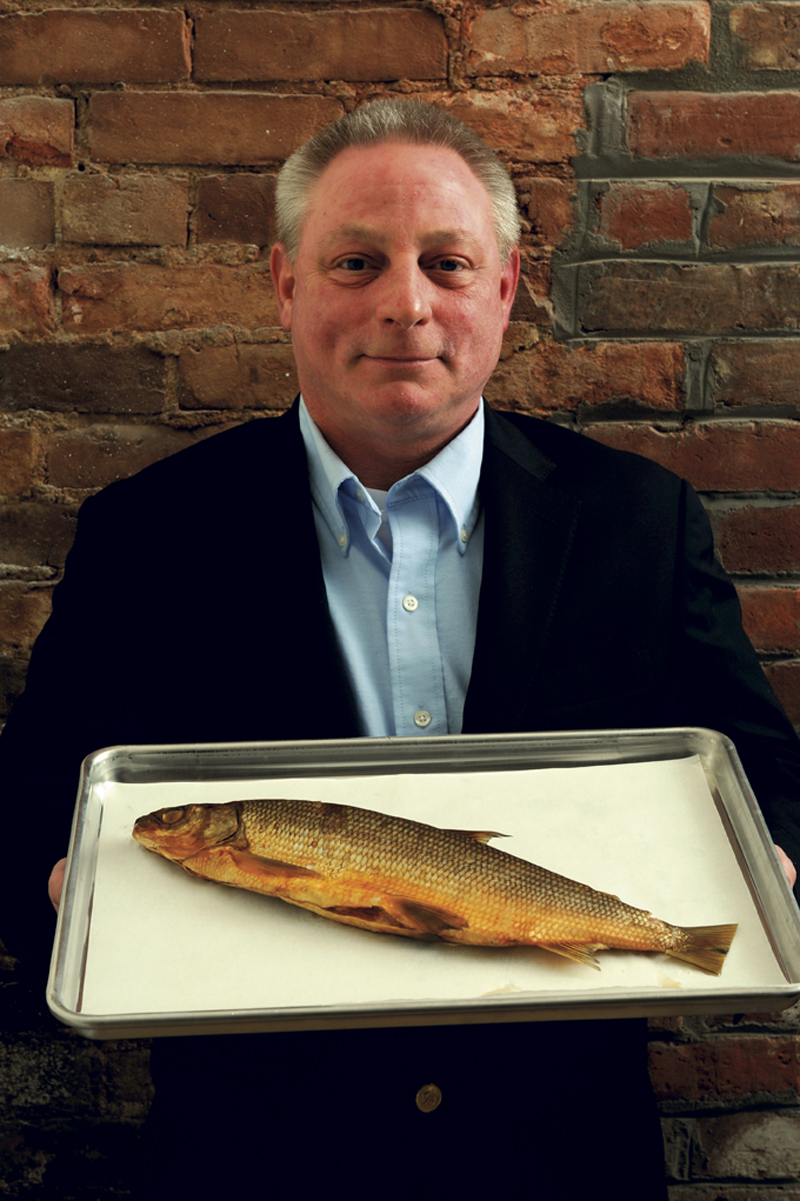 With a ready laugh and sparkle in his eyes, Lewis Shuckman projects an easy-going joie de vivre,

perhaps evidence of his satisfaction heading the third generation of a family business founded in 1919.

At Shuckman’s Fish Co. & Smokery, he handles production of about 1,000 pounds of smoked fish and seafood spreads each week, and maybe 50 pounds or more of their famous paddlefish caviar when in season, while his wife Vicki and oldest daughter Lauren handle the front office.

“Fish tremble at the sound of my name,” he booms with a laugh in the middle of describing how over the last three decades he’s developed a product line considered one of the finest examples of Kentucky Proud. With processes using Kentucky Bourbon, native hickory, apple wood and alder, even the char from recycled Bourbon barrels, Shuckman is a one-man spark plug stimulating Kentucky trout, paddlefish and catfish aquaculture.
No stranger to modern science, Shuckman still hews closely to traditional techniques and the quality represented in small batch, hands-on production.

“We use curing and smoking techniques developed by Native Americans hundreds of years ago. And you know what? They work. You can taste it in the product,” Shuckman said. “We’re not in a hurry to get it out the door. Mass produced is not what we do here.”

Innovation has been a hallmark of the family business ever since Shuckman’s grandfather, Isia, a master butcher, came to Louisville from Chicago in 1919 and opened his shop on West Kentucky Street, serving hotels, fine restaurants, and the many private rail cars that would come into town for the Derby. His son, A.J., is reputed to be the first to introduce self-service, pre-cut meats in 1954. They moved to their present location on West Main Street in Portland in 1964. There they continued to supply whole­sale meats and added processing chickens for a young, burgeoning restaurant chain called Kentucky Fried Chicken.

Lewis Shuckman learned one had to respond to changes in the market and he and his father sensed a big one starting in the late 1980s.

“For health reasons, people were eating less meat and consuming more fish,” Shuckman said. “The air freight business also really sparked the fish industry and I started exploring the smoke house idea. I got with Marshall Taylor in Elizabethtown, who supplied all the trout to the State Fair, and after five months had a good product.”

The reception was positive and enthusiastic. But it was another lucky coincidence in the early 1990s which led to Shuckman catching lightning in a bottle — his trying fish eggs from a Kentucky paddlefish, and the fall of the Soviet Union.

“The paddlefish roe was delicious and the caviar market was just going crazy,” Shuckman said. “Without regulation, exploitation led to overfishing on both the Caspian and Black Seas and prices skyrocketed. While foreign sturgeon once held sixty percent of the market, it reversed in two years and a robust domestic market was created.”

“Caviar doesn’t have to be expensive to be good,” Shuckman said. “And it’s a social thing, part of an intimate experience you can share with other people, like fondue. You have your crackers or blini, your crème fraiche, capers, minced onions and eggs, and you sit around in a circle and enjoy it and each other’s company.”

Shuckman hints he was asked to leave more than one kitchen when he first tried promoting the new product, but some chefs were encouraging, including Jim Gearhart, then executive chef at the Oak Room in the Seelbach Hotel.

“Jim Gearhart was really exploring all the Kentucky products that could be used in fine dining and they used both the smoked trout and our Kentucky Spoonfish Caviar® in a big dinner in 1994,” Shuckman said. “His assistants, Adam Seger and Michael Cunha, were very positive and helped energize both my ambition and determination.”

Shuckman went on to earn national attention for his Kentucky Caviar and smoked fish in media outlets like the New York Times, Wall Street Journal, and the Discovery Channel. At the same time, he used his success in the caviar market to build a strong product line of smoked fish and, more recently, very popular spreads made with salmon, whitefish, crab and shrimp.

“‘Pure, Fresh, and Natural,’ is our slogan for the spreads,” Shuckman says. “No flavorings, no preservatives, no imitation crab­meat, etc., and they’re really affordable. I think of them as our gate­way product, something which lets people enjoy how good a flavor smoking imparts. Then, hopefully, they will try what else we do.”

What Shuckman does is perform magic, balancing spices, brine, and even Pappy Van Winkle 10 Year Bourbon, in both dry and wet curing processes, and then smoking the fish with various woods, sometimes adding char from recycled oak Bourbon barrels, to impart flavors and character rarely found anywhere else.

“Hard Smoking” and “Cold Smoking” are the alternative processes which take place inside a stainless steel chamber as high and wide as a person. The former, at temperatures up to 200 degrees, completely cooks the fish. Cold smoking is done at 55 degrees for up to 12 hours to impart special flavoring and finish.

Shuckman hard smokes whitefish, trout and salmon (and paddlefish when in season November through April) with alder, hickory or apple woods until they are flake-tender. He cold smokes his Nova Salmon, (often called “lox” at cafés and bagel shops) to impart both Bourbon and vanilla tones to sushi-like flesh whose amber orange color looks like molten bronze.

A lot of local chefs list Shuckman’s on their menus and you can frequently find it from high-end restaurants like the Oak Room, Proof on Main, 211 Clover Lane, Jack Fry’s, Gary’s on Spring or the newly-opened Rye, to smaller 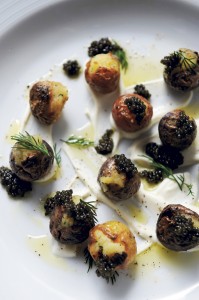 Shuckman is an artist, both in his exploration of fine taste, and continued development of new products. This year several new products — whole Lake Michigan smoked whitefish, a new applewood-smoked paddlefish and an Italian sausage made with smoked salmon — will be available at the Rainbow Blossom on Lexington Road and Valu Market in Mid City Mall. They are just a few more reasons to discover a true Kentucky original.