Union 15’s web site has the back story.

Union 15 South End was co-founded by two Southenders – Paul Blackburn who attended Holy Cross High School and Alex Tinker who attended DeSales High School. We were both born and raised in the area and couldn’t be prouder to come back to it.

We chose Colonial Gardens because of its rich history and ties to the South End. Growing up, we watched Colonial Gardens go from being a fun filled dancehall and local hangout to a downtrodden blight. We saw an opportunity to give back to the community who raised us to be the human beings we are today through a really fun and friendly local concept – Union 15! We’re proud of our heritage and cannot wait to be an active member of our local community.

Blackburn and Tinker previously started Citizen 7 in Norton Commons (now closed), Parlour in Jeffersonville, Indiana (recently under new ownership) and Couvillion in Germantown. At Union 15 they’re teaming with Adam Greene, the co-owner and day-to-day manager of the business.

According to Louisville Business First, “The Union 15 space is about 3,400 square feet and can seat 140 inside. A shared outdoor courtyard area can seat an additional 40 people. The restaurant employs nearly 30 people.”

There’ll be a special pizza of the month, with the first creative pie pictured here: sweet chili beef stir fry. 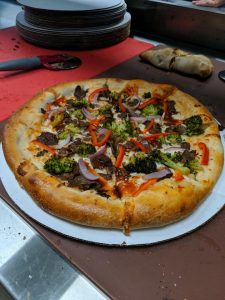