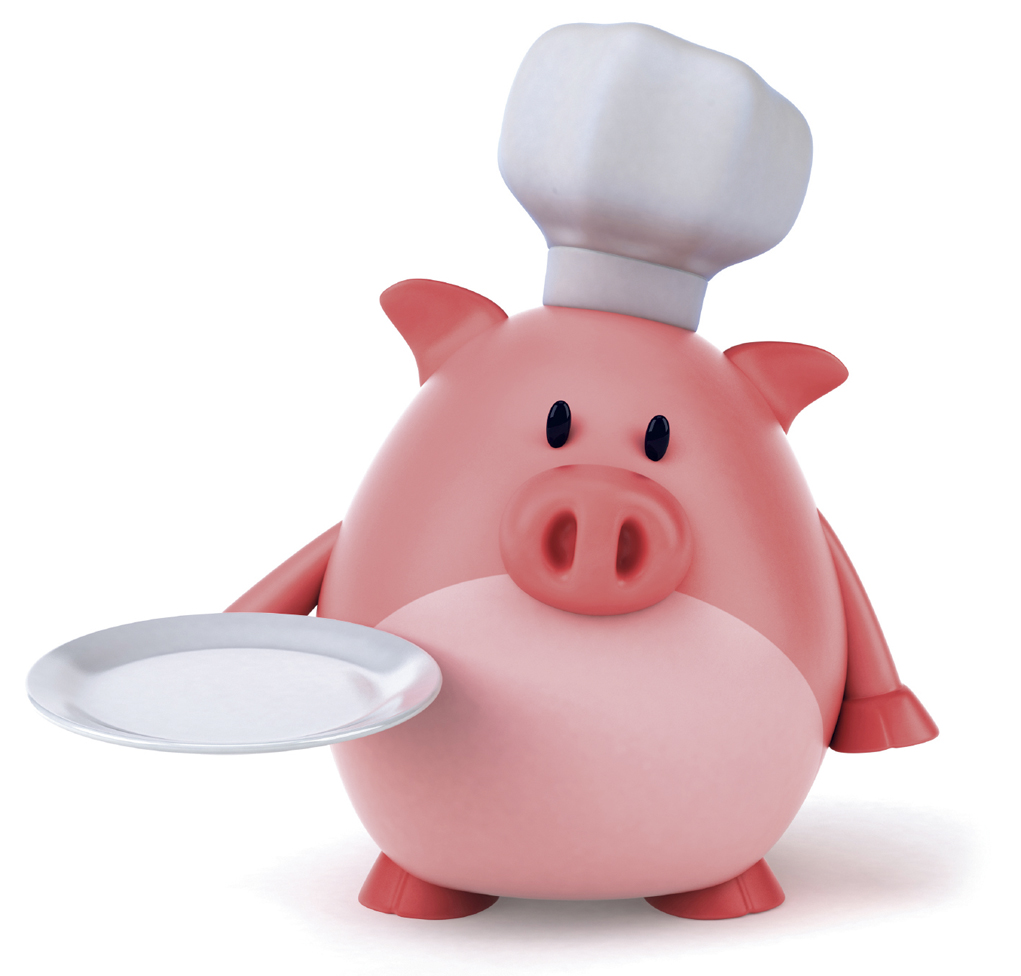 On November twenty-something, most Americans will sit down to a Thanksgiving dinner. They will eat turkey with gravy, mashed potatoes, dressings and casseroles. They will finish with pumpkin pie, wipe their mouths, and push back from the table, thinking that they have had a good meal. They are wrong!

A new power is rising: Thankspigging. And this is the story of the made-up holiday that must be told.

It began with a spark of divine intervention. While browsing the bins of medicine-ball sized frozen turkeys a few years back, my friend Teddy was struck by the fact that turkey, frankly, is boring. An avid pit master and pork devotee, he recognized – correctly – that the pig was a far tastier creature. But with hundreds of years of tradition and millions in marketing behind it, Thanksgiving was not going to easily give up the bird. Being a man of action, Teddy approached me with the concept of a new holiday, a better holiday; a holiday that involved not bland, cottony wads of corporate fowl but deliciously decadent pigs. The term “Thankspigging” was coined, and it has since become a special occasion we celebrate every year. I wish to share it with you in the hopes of spreading the good word, and to hopefully bring new participants into the fold.

A Brief History of Thankspigging

“As God took rib from Man and Made Woman, Man took Rib from Pig and Made Thankspigging.”

Thankspigging is more than an excuse for porcine indulgence; it is a celebration of the joys of life’s blessings. Take the Pig. Why else would God have given us such a tasty animal if he in his divine wisdom did not wish us to slow-smoke his providence over hardwood charcoal with perhaps a nice garlic and peach glaze? Thankspigging is held the day after the Holiday Who Must Not Be Named. It combines the best of both worlds –leftover side dishes, along with slow-smoked pork butts and ribs. Add some homemade beer, special pig-shaped hats and door prizes, good friends who happen to be in town for the holidays, and you have all the ingredients for a great time. Below is some of the history and lore, completely made up of course, surrounding this most delicious of occasions.

A: Thankspigging is a joyous festival that pre-dates the Puritanical farce of “Thanksgiving.” It is celebrated on the last Friday of Eleventh Month, when the Pig-star shines most brightly in the November sky.

Q: Where did Thankspigging come from?

A: Thankspigging’s roots stretch back before the Dark Ages of Europe and remain shrouded in the mists of time. Much of our knowledge is apocryphal, but its earliest practitioners seem to have been the druids. Serious scholarship of Thankspigging has emerged as a respectable course of study in the finer Universities such as Harvard and archeological finds continue to shed more light on the subject.

Q: Not having reliable chronometers, how did the Druids know to celebrate Thankspigging?

A: Crudely carved pig knuckles, engraved with sacred runes and cast into a hollowed hickory log, were the preferred early method for determining the date. As Thankspigging became more important, a more precise means was necessary to coordinate the defense of the vulnerable Pig-wains that rolled through the dark woods of pre-history. Eons of Druidic study resulted in the construction of the astronomical complex at Stonehenge. When the pig-star shone through the plinths of rings A and D, Thankspigging was on! After the rise of the Norseman, it is believed that the Vikings celebrated Thankspigging whenever they felt like it. As they were Vikings, nobody could really tell them not to.

Q: If Thankspigging was so important, what happened to it?

A: After its golden age, the Viking civilization began to decline with the Norman conquest of England. Their fall has been attributed to high cholesterol and the aerobic intensity of raiding thatched-roof cottages from seagoing longboats. Thanks to the development of Lipitor and stents, Thankspigging no longer poses such grave risks to modern practitioners.

Later, in the Middle Ages, the Catholic Church stamped out all celebrations of Thankspigging. It was thought that the pig, with its cloven hooves and its exceptionally sinful deliciousness, was the preferred meat of Satan. Also, peasants who overindulged in pork were deemed lazy, and their cruel masters denied them all the earthly pleasures of the Swine. Hand in hand, these powers did their best to make sure the holiday died a pagan death.

Q: I never learned about Thankspigging in school. Why?

A: History books are written by the winners. As such, knowledge of the history and customs of Thankspigging have been systematically quashed. Until now.

A: Typical attendees are people in search of spiritual enlightenment, with keen intellect, who also love bacon. These seekers wish to attain what is colloquially known as ‘Rib Rapture.’ Other cultures recognize this state as “Nirvana” (Hindi) or “Satori” (French).

A: Children are welcome at Thankspigging. However, Thankspigging cannot be responsible for tender, milk-fed children weighing less than 20 pounds.

Q: What is served at Thankspigging?

A: The most important component of Thankspigging is smoked pork, and the more complicated and time consuming its preparation, the better. A minimum of two pork butts and four racks of ribs are required, and the truly dedicated roast whole pigs on sections of chain-link fence. Leftover Thanksgiving sides round out the meal, along with homemade beer if possible, preferably served in medieval goblets or Viking horns.

There you have it – a recipe for your own celebration. Now you have a great excuse for back-to-back feasts, and a clever way of polishing off your leftover sides. I urge you to take the plunge this year and, as our Viking forefathers may have said, “Wyne hae un goode pigge, mit bierre!”