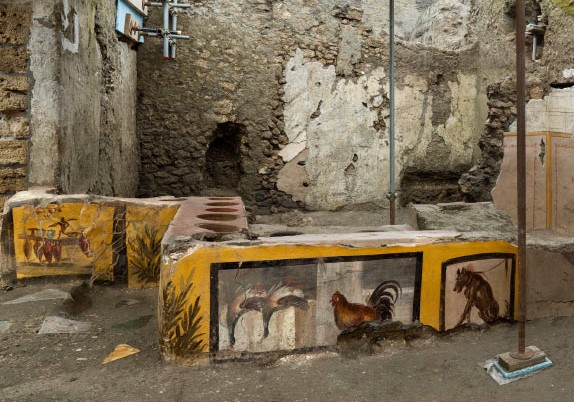 “In the ancient Greco-Roman world, a thermopolium (plural thermopolia), from Greek θερμοπώλιον (thermopōlion), i.e. cook-shop, literally ‘a place where (something) hot is sold’, was a commercial establishment where it was possible to purchase ready-to-eat food.”

Many such thermopolia have been uncovered since archeological work began at Pompeii, the Roman city buried by the eruption of Vesuvius in 79 AD, and recently a thermopolium under excavation there captured global media attention owing to its brightly colored frescoes (savvy ancient marketing) and dolia (earthenware jars) embedded in the counter, some of which contained leftovers capable of being identified these many centuries later.

Recalling the significant changes to cuisine in the Italian lands that came with colonization of the Americas—potatoes, tomatoes, capsicums, corn, sugar beets—it’s fun to ponder what the doomed Pompeiians were eating, and quite a lot has been learned.

Start here, with an article that includes a recipe for Master Stock Braised Duck With Mensae. Author Farrell Monaco believes most thermopolia in Pompeii functioned as taverns (popinae, or public houses), and we can make educated guesses as to their choices of pub grub.

In consideration of some of this evidence, if we were to hypothesize that what we’ve read in the Latin literary record about “boiled meat,” “broth and chunks of meat,” and the “reek and fume” of stew houses refers to a popina, then we can also speculate that the bone and shell matter found in the dolium in the newly unearthed popina in Regio V was destined for broth. Does all of this evidence suggest that meat boiled in broth at the corner popina is the Roman version of pub grub? I believe it does, and this now brings us much closer to proposing a first-century Roman meal that could allow us to explore this space using another investigative tool: our taste buds.

It’s amazing that “Reek and Fume” hasn’t yet been borrowed for use by a new-age hipster eatery, and duck stew with bread for sopping up the gravy sounds like a thoroughly modern concept suitable for franchising. It bears a reminder that for Pompeii’s lower orders, bread alone and perhaps occasional vegetables and fruit might have defined their diet, augmented by occasional trips to the corner duck stand when times were good.

Ascending the socio-economic ladder: The story at the table: the typical dishes of ancient Pompeii.

The sources from which to draw in order to understand the eating habits of the Vesuvian city are numerous. About Pompeian cooking talk Latin writers like Apicius, Columella and Pliny. Their works offer a comprehensive idea of ​​what should not miss in the garden and on the tables of the people of Pompeii.

It comes as no surprise that at least one celebrity chef has offered his own interpretation of tastefully plated cuisine from ancient Pompeii: How to Eat Dinner Like the Last Citizens of Pompeii.

For the Pompeii menu, (chef Heston Blumenthal) and Ashley Palmer-Watts, the executive chef of Dinner by Heston, drew on the carbonized food remains on display at the museum and the recipes gathered in the first-century Roman cookbook known as Apicius, indulging in a bit of time travel as well as innovating upon the ethos of the ancients.

Getting topical, Valentine’s Day is only two weeks away. Today’s Pompeiian rumination ends with this brief tutorial by Laurence Totelin: Lizards and Lettuces: Greek and Roman Recipes for Valentine’s Day.

As you prepare to tuck into your oysters, followed by a garlicky main course, and a chocolaty desert on Valentine’s night, spare a thought for the Greeks and Romans, whose aphrodisiacs I now present to you. Ancient medical treatises contain numerous recipes for aphrodisiacs. This abundance may give the impression that the Greeks and Romans were a liberated bunch, with a healthy interest in a fulfilled sexual life.

Certainly, archaeologists have discovered a wealth of sexually-themed Greek and Roman objects over the years. Many, like those found at Herculaneum and Pompeii, were hidden away for decades in ‘Secret Rooms’ in museums, only to come to full light quite recently. One has to be careful, however, not to look at such objects with too modern a gaze. Many had ritual purposes: they were meant to ward off various dangers. And among the perils the ancient feared most was infertility, human, animal, and vegetal. Barrenness of the earth would bring hunger; human barrenness would mean the end of the family line. I believe it is in this context that ancient aphrodisiac recipes are best read.

White Castle hasn’t thought of this for Valentine’s Day, at least yet. With so much reeking and fuming in America at present, I really am holding my breath.