Home DRINK Beer From the archives, the story of an enterprising brewer in pre-Prohibition New... 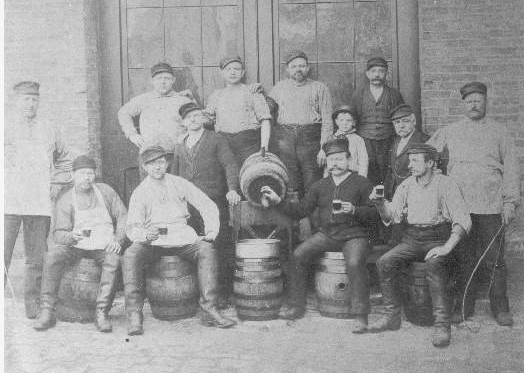 Whatever else one thinks about living through a pandemic, it must be conceded that the usual food and dining story lines are limited. I’ve been going through the archives, both Food & Dining Magazine’s and my own, in search of interesting articles. Today, a little known beer episode from New Albany brewing history, which I researched and published in the New Albany Tribune in 2009.

“Herr Tusch is a lager brewer of great repute whose cleanliness and quality is of the highest order, with barrels filled and delivered fresh within the astounding radius of ten blocks from his business address.”

It seems that Tusch was about to release a revolutionary new product. Who was this long forgotten New Albanian, and what was his plan to reorder the brewing universe?

Tusch was born in 1861 in Einenwitz, a Bavarian village internationally famous for the pureness of its drinking water. His itinerant father trained him to be a magician, but the young man changed careers in 1884 after a card trick went awry and injured a prelate’s eye. Fleeing town, he became a brewer’s apprentice in Lustigstadt, later eloping with his employer’s youngest daughter, Weitta, and relocating to Northern Germany.

The couple decided to immigrate to America. While working as a waiter in Hamburg to save money for the overseas journey, Tusch became acquainted with the city’s renowned Diät Pils, a low-strength, highly attenuated lager designed specifically for diabetics, consumptives and the chronically ill.

“Those poor, desperate drinkers are told that Diät Pils, which comes at a higher price, has less sugar and can be consumed in small amounts without detriment to their condition,” Tusch wrote, “but they still drink more of it because, they contend, it feels less full in their stomachs. Very interesting, this illusion.”

When the liner Teutonophilia left Hamburg for the United States, the Tusches had little to call their own. Their wooden chest contained earthenware beer mugs, a matrimonial pretzel mold, and – written in code – the secret technique for “triple hopping” that Tusch intended to use at his future brewery.

In 1902, Tusch’s dream finally came true, and a magnificent brewing plant was built in New Albany at the corner of West 8th and Water Streets. He immediately saw that while the older citizens preferred traditional styles, ensuing generations were stirring from ancient ways. Intrigued yet cautious, Tusch began ruminating. There was German brewing, and then there was American marketing. He recalled his father’s magic tricks, and pondered:

“When the neighborhood men, these glassmakers and carpenters and blacksmiths, send their lovely rosy-cheeked children to me for growlers of beer, how might I convince them to pay for two buckets to hang from the handle bars of their bicycles, and not merely one?”

The answer finally came one late summer day, when Tusch accepted an acquaintance’s lunch invitation. Upon arrival, he was shocked – neither at the salad being prepared with vegetables from a patch by the street-side sewage ditch (in German, “Neuealbaneekanal”), nor the flank steak from the little butcher shop opposite Churchill Downs, but because the soup stock was none other than Tusch’s own Aecht Fett Tuscher Doppelbock.

“Scheisse!,” Tusch exclaimed. “My beer is so heavy that it makes barley soup!”

“The ancient monks were not speaking in riddles,” recorded Tusch. “Their beer really was liquid bread. Small wonder that my delivery wagons break down just a day after the thousand mile warranty is passed, and the children can convey only one bucket at a time to their toiling fathers. My Fett Tuscher weighs too much!”

Tusch’s conclusion was elegantly simple: “I must make lighter beer.”

He soon discovered that brewing light beer would require an entirely different technical approach. Previously, all beer had been dark in color, as stained by the inky residue of coal smoke in rusty kettles seldom cleaned. How to make this blackness into pale?

With the help of tanners at the nearby Moser firm, Tusch found that dark beer could be given a harsh lye bath, rendering it a bleached golden hue, and making it lighter in liquid weight by an impressive average of 25% per hundred barrels.

As for the “secret” triple hopping, Tusch discovered with considerable dismay that it actually was the norm in brewing circles worldwide, but anticipating the deceptive utility of the term for the purposes of salesmanship, he chose instead to keep the phrase and slash the hop presence in his new beer to almost nothing. Another 25% of weight duly vanished.

The result, dubbed Tuscher Leicht, clearly predates the modern light beer phenomenon by as many as fifty years. Ingeniously, Tusch had reduced the cost of production by half, and the beer itself, advertised as healthy in moderation, was so watery that drinkers could be counted on to consume even more of it at precisely the same price, without ever really thinking about the higher final toll on their wallets.

On April 1, 1910, the inaugural batch of Tusch’s new light beer emerged from the lagering cellar after ten days, was racked into massive wooden barrels, and loaded onto a brewery delivery wagon, much to the relief of a team of horses accustomed to far heavier beer. Numerous advance orders were waiting to be filled, and the forecast looked bright.

Alas, at this moment of triumph, the story of Augustus Tusch ends in tragedy.

When that very first wagon filled with Tuscher Leicht left the brewery yard, it struck Tusch, who had stepped outside to light his pipe, tripped when his boot caught a snag in the jagged, unrepaired sidewalk (the “Neuealbaneekranksteig”), and fell straight into the path of the unstoppable vehicle.

Tusch, the only man who knew the exact recipe for Tuscher Leicht, died later that day in St. Edward’s hospital, a doomed victim of the unbeerable erring of lightness.