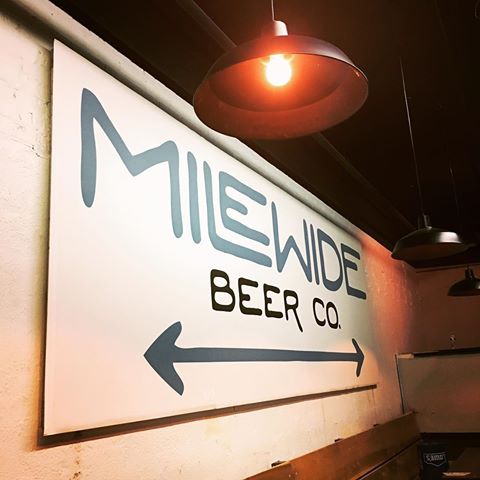 Two more local beer makers are in the news. Mile Wide Beer Co. has opened last week at 636 Barret Ave., below Diamond Billiards and Pub, in the old grain silos on the north side of Broadway, where Jillian’s once was. The new brewery has been under  construction and planning for over two years, and opened Dec. 9.

Mile Wide (whose logo depicts the struts and braces of a bridge, and a two-sided arrow under the Mile Wide wording, suggests the name refers to Louisville’s siting on the Ohio River. Mile Wide will open with five beers on tap: White Ale, a Belgian-style witbier; Wooderson, a mesquite-smoked blonde ale; Good Evening, Miss, an English-style ale; Uncle Disheveled, a coffee stout brewed with Highland Coffee; and Catalina Breeze, a West Coast Scavenger, according to a press release.

The other beer news is a followup to an earlier post about the revival of Sterling Beer. Brothers Todd and Ken Jackson have now officially purchased the long-vacant red brick building at 1300-1306 Bardstown Rd., across the street from the Bristol Bar & Grille, that once was the communications center for the city’s Emergency Management Administration.

The Jacksons bought the old Sterling beer brand in 2012. They now intend to renovate the building to house their brewery, which will bring Sterling, which began in Louisville in the middle of the 1800s, and then moved around hither and yon, back to its origin. The building will also house offices, a tasting room, event space and a museum.