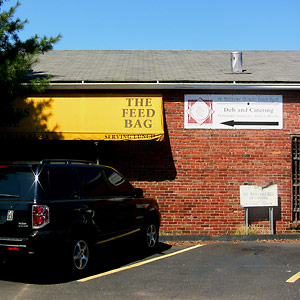 One of St. Matthews most long-standing, popular, though rather tucked away dining spots, The Feed Bag, 133 Breckenridge Ln., is slated to close at the end of December. The building housing it has been sold, and the new owner wants new uses for the space.

Some thought was given to seeking a new location, but owner John Petrie decided to close the restaurant and expand his catering business, which has been a steady sideline to the  restaurant.

The Feed Bag provided satisfying soups, salads and sandwiches to St. Matthews shoppers and local business people, those who knew where to look for it tucked behind  St. Matthews Station, and knew to park in the Pearson’s Funeral Home lot.

The Feed Bag has long been renowned for its Reuben sandwich, served on marbled rye, with 100 Islands dressing on the side, for those who think that Reubens are best with mustard, not a goopy mixture of mayo, ketchup and pickle relish.

Another patron favorite has been Chumbo, a balance of chili and gumbo that has been on the menu for the last decade. Click here for the full menu, which will be all gone in about six weeks.